The new funding complements an agreement between the town and Suffolk County to spend $44 million on sewers along the Route 110 corridor, which was announced in December.

“What that project was lacking was connections to homes,” Gaughran said. “We said, ‘If you’re already building up new systems, would it be possible to find money to c connect homes.’ And this money is exclusively to connect homes to this new sewer system. Bringing this money back to Long Island will allow homeowners to phase out their cesspools, an expensive and inconvenient system, and utilize sewer infrastructure, which will tremendously benefit our environment. Let’s get shovels into the ground!”

The lack of sewers has been an impediment to growth and environmental protection in the area, business experts have said. Details about precisely which streets would be included remain to be determined, but homes closest to Route 110 are expected to be involved first as sewers are built out from the corridor.

“This is a great day or Huntington Station,” Supervisor Ed Smyth said. “This is the final piece of the financial puzzle to fall into place. Infrastructure is extremely expensive.” He said town and county officials would be sitting down to work out details of a timeline and determine other details of what happens next.

The precise number of homes that would be included in sewer services is unknown. Some of the state funds could be used to repair existing sewer connections farther south on Route 110 in South Huntington and Melville. The county-town plans announced in December covered Route 110 from the Long Island Rail Road  station to Jericho Turnpike. Those funds came from the  American Rescue Plan Act.

Stern, who represents Dix Hills in the state assembly, said, “This vital funding will provide substantial assistance to our local homeowners, who for decades have struggled with the costs and inconvenience of septic system maintenance. This is particularly gratifying for me because when I was first elected to the county legislature, I worked with other local colleagues to begin the process of initiating the procedure to obtain sewer funds, particularly for Huntington Station. And now, serving in the state assembly, for me it was really very meaningful, great to stand with colleagues.  It was really great to see we can bring funds; it is important not just for Route 110 but for residents. This crucial infrastructure is truly transformational, and will help protect our homeowners and our precious environment in Huntington Station for generations to come.”

The new lines would be connected to the Southwest Sewer District.

Cergol said, “It’s extremely exciting. This is everything we’ve planned. This is the secret sauce to make it happen.”

Pally noted the environmental benefits of sewers instead of cesspools, saying, “Promoting sewer construction and connections for our residential communities is essential for both the protection of our environment by reducing the amount of nitrogen going into our waters and by promoting economic development by allowing for additional building options which are not possible today under county health department rules and regulations because of the lack of sewers.  These funds will allow this community to be part of the rebirth of many areas of Suffolk County which are handicapped by the lack of sewers.” 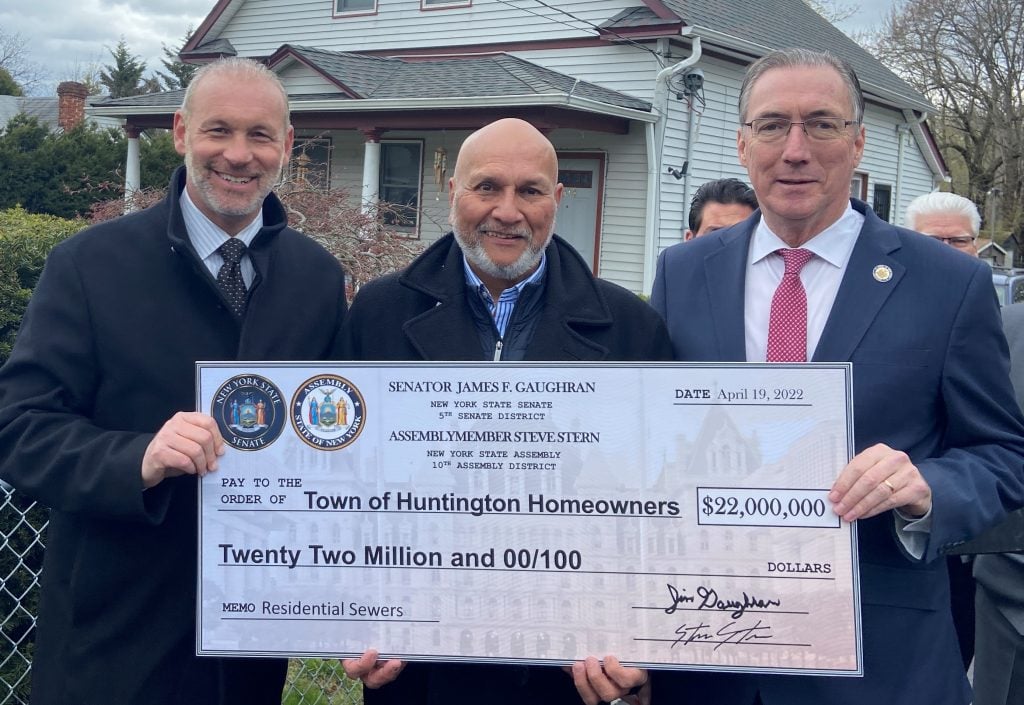