After almost five years of hard work, development and research, the educators at the Whole Child Academy will be able to see the fruit of their labor.

Located at St. Elizabeth’s Church on Wolf Hill Road in Melville, the Whole Child Academy is implementing new methods of teaching to help students–specifically those identified as having twice-exceptionality–gifted children with high intelligence and potential who simultaneously suffer from one or multiple disabilities. On Wednesday, they’ll have their first graduate.

Their disabilities can make it difficult for them to learn in the standard classroom setting. When it is more difficult for them to learn, their grades suffer and they may fall behind their peers. In an interview with HuntingtonNow, Dr. Ellen T. Richer, the founder and head of the school, explained exactly how the school works and the types of students it’s designed for.

“Teachers who see [a disability] will typically jump on that child,” Richer said. “After a very short amount of time, the rest of the kids know that that kid is a ‘problem child’.”

In other words, disabilities can lead to social and academic problems.

At the Whole Child Academy, each student is assessed at the beginning of the year to see identify their strengths and weaknesses. From there, their classes and experiences are tailor-made to meet their profiles.

With only 11 students this past year, the academy has been able to implement this system effectively. Each student goes at their own pace on a 1-on-1 level that combines both New York State Common Core and other, more hands-on methods. Dr. Richer said, “It’s more of a mentorship, mentor-mentee kind of relationship. We’ve removed the whole power play between a teacher and a child where they’re butting heads.”

This type of instruction has been able to unlock students’ minds and get them engaged in learning, Richer said. She told the story of a student who was extremely dyslexic. He could not read, and his teacher recognized how daunting the textbooks could be in teaching about World War II.

“He took a large map of Europe and laid it out on the floor,” she said. “He had two little Nerf slingshots and these little army men he had brought in and he set up some battles in the different theatres on the map.”

It has been a long five years for Richer, who was originally an artistic creative director but found some flawsin the public school system. She received her doctorate in gifted education and has spent the past 20 years in this field, researching under-achieving students who have “fallen through the cracks.”

After founding a twice-exceptional school in Manhattan in 2014, she noticed the lack of programs and schools on Long Island. With that, she created the Whole Child Academy in 2016, the first not-for-profit academy on Long Island that caters specifically to 2e students.

Richer has plans of expanding the program elsewhere, possibly on the East End and one in Queens.

“I don’t want us to be known as a special-needs school,”  Richer said. “I’d rather our children who attend our school know that they’re in a school for kids who can do miraculous things when they get older.” 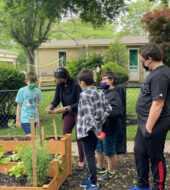 Students watching a butterfly being released in the school’s garden. 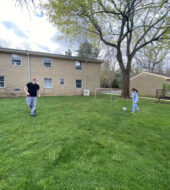 A student and a teacher playing soccer together. 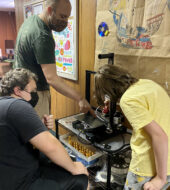 Making use of the school’s 3D printer. 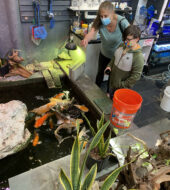 Dr. Richer taking a student on a specialized field trip. 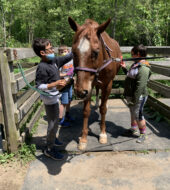 Students participating in the equine program.