Even as a judge’s decision in the Long Island Power Authority tax lawsuit over the Northport power plant is pending, some groups are keeping up the fight, some in new and novel ways.

Newsday reported last week that a Nassau County lawmaker said a proposed settlement over a power plant in Island Park is “in limbo,” because of the passage of a bill in the State Senate that would limit the utility’s ability to demand retroactive refunds from communities.

Town Councilman Eugene Cook, who previously tried to have the town take over the plant by eminent domain, last week said LIPA didn’t follow the rules in challenging its tax burden, an issue the utility immediately disputed.

And Concerned Taxpayers Against LIPA filed a friend of the court brief, accepted by the Supreme Court, Appellate Division. The taxpayers group has led rallies, filed petitions and lobbied political leaders to find a route to head off the tax cut.

LIPA is challenging the town’s tax bill of $82 million, saying that the Northport plant is over-assessed, saying it is worth $198 million, not $3.4 billion that the town claims. A significant cut in taxes on the plan would hit the Northport-East Northport school district hard, though homeowners throughout Huntington could feel the impact. The plant is owned by National Grid, which sells power to LIPA.

Here are some of the key dates to know. 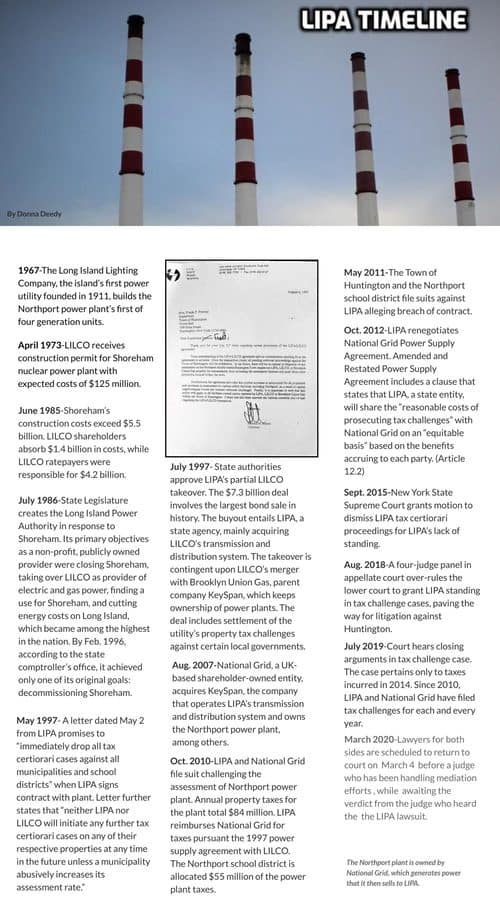