The Zoning Board of Appeals has postponed a decision on several requests by Hartz Mountain Industries for its proposals for the property currently occupied by Newsday.

At its meeting Aug.8, real estate attorney Keith P. Brown and other representatives of Hartz outlined requests for parking, sign, outdoor overnight storage, and other variances for its plan to build two warehouses, one at 276,500 square feet and the other 634,585 square feet, with office space in each.

Hartz bought the Newsday property last year and the newspaper is in the process of moving its operations this weekend down the road to leased space at 6/8 Corporate Center Dr., off Pinelawn Road.

Newsday, which has occupied its building since 1979,  stopped publishing in Melville in 2018 when it contracted with The New York Times to produce and publish the paper in Queens.

Hartz plans to knock down the Newsday building at 235 Pinelawn Road and reconfigure the property, which is zoned for light industrial use.  The project is divided into two under the names 235 North LLC and 235 South LLC but both are subsidiaries of Hartz. A strip of land owned by LIPA to support high-tension wires bisects the whole property, which is nearly 50 acres.

Brown said the Hartz plan would generate about 800 full-time jobs and about 960 construction jobs.

But several residents of The Club at  Melville, an over-55  community on Deshon Drive that opened in 2016, objected to the potential for heavy truck traffic, saying it posed health and safety hazards.

Brown noted that “Newsday in its heyday” had had far more workers and truck traffic 24 hours a day  caused by the production, printing and delivery of newspapers, than it has now.

But Marc H. Schneider, managing partner at Schneider Buchel LLP in Garden City, who represents the homeowners association at The Club at Melville, said the 261 homes and more than 500 residents at the site “would be gravely impacted by what is proposed.”

He said residents weren’t opposing the industrial nature of the site but “They understand. They bought knowing Newsday existed, they bought knowing there’s an industrial site across the street from them. However, they didn’t buy to be living next to what is being proposed here.”

Brown said the company had asked Suffolk County to allow for a traffic light on Pinelawn Road but was turned down. The county did not immediately respond to a query.

The board voted to allow the opponents more time to review documents. It normally meets every week but is taking an extended break and will reconvene Sept. 5. 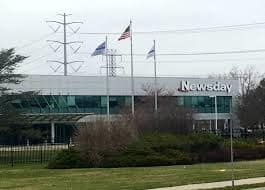