Michelle Bond, the CEO of the crypto trade organization the Association for Digital Asset Markets, is running for the Republican nomination for the 1st Congressional District seat.

Bond said, “I’m a businesswoman, not a politician. As an America First conservative, I’m running for Congress to stop the Biden policies that are destroying our economy. People can’t afford to fill up their gas tanks, but career politicians in Washington keep looking out for themselves while running the country into the ground.
“We need problem solvers who have actually held a private sector job in the last 13 years, not more career candidates looking for their next gig,” she said.
At the end of the campaign fundraising quarter on June 30, Bond said she has $962,000 on hand,  $250,000 contributed by supporters. She also put in $600,000 of personal funds.
Bond described herself as a native New Yorker who grew up in Suffolk County. She attended Miller Place High School and SUNY Stony Brook.
“Career candidate Nick LaLota, who has been on the taxpayer dime since 2009, will be more of the same. It’s time for something new, which is why people are lining up to support my campaign,” she said.
She said she is pro-life, pro-former President Donald Trump’s border wall, and “will work tirelessly to stop the Biden-Harris-Pelosi agenda. She believes the police need to be defended, not defunded, she said.
After graduating summa cum laude from Baruch College and the Catholic University of America’s Columbus School of Law, where she was first in her class, Michelle worked as a policy expert in the U.S. Senate and at the U.S. Securities and Exchange Commission.
Bond was in Huntington Monday, handing out campaign literature.
Both candidates are calling each other fake, with LaLota saying she is a fake Long Islander who just registered to vote in Suffolk County in May, and that she contributed to the campaign of Democratic Sen. Krysten Sinema of Arizona. Bond says LaLota worked for former Democratic US Rep. Steve Israel, and supported the defund the police movement by having voted to cap police salaries.
LaLota has been endorsed by town and Suffolk County Republican organizations.
The First District seat is occupied by Republican Lee Zeldin, who is running for governor against Democratic Gov. Kathy Hochul. The congressional primary is scheduled for Aug. 23, with the general election set for Nov. 8. 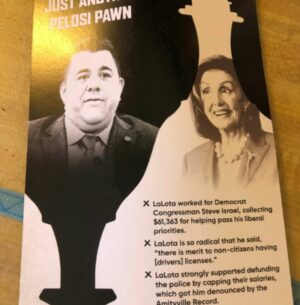 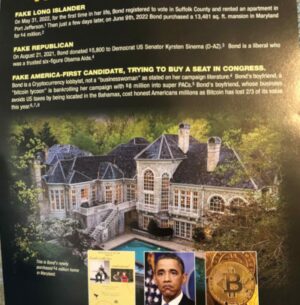