Huntington Republican chair Tom McNally has sent a stern note to party members reminding them that Ed Smyth, and not Gene Cook, is their candidate for town supervisor. And he accuses Democrats of co-opting Cook.

The email, which was also posted to Facebook, was  in response to a fundraiser that Cook, a Republican who is running for town supervisor on the Stop LIPA  line, had this week at Oheka Castle.

“Sadly, Eugene Cook has partnered with, and is being supported by, prominent Democratic Party leaders and operatives in his campaign for Town Supervisor. This is part of a Democrat scheme to siphon votes away from Ed Smyth and elect a liberal Democrat as Huntington’s next Town Supervisor. This is dirty politics and, unfortunately, the Democrats have co-opted Eugene Cook to be a part of it.”

Smyth  is running against Democrat Rebecca Sanin and  Cook.

For his part, Huntington Democratic Chair Frank Petrone denied that his party was involved in Cook’s campaign.

But he acknowledged that some individuals might have helped with collecting signatures to help Cook get onto the ballot because they were motivated by opposition to LIPA. He also noted that Republicans got spots on the Working Families Party line in the June primary.

“Any contribution to Eugene Cook’s campaign is money that will be directly spent against the endorsed Republican and Conservative candidate Ed Smyth,” McNally wrote.

Huntington Republicans are gathering Monday for a golf outing at the Huntington Crescent Club. See flyer for details. 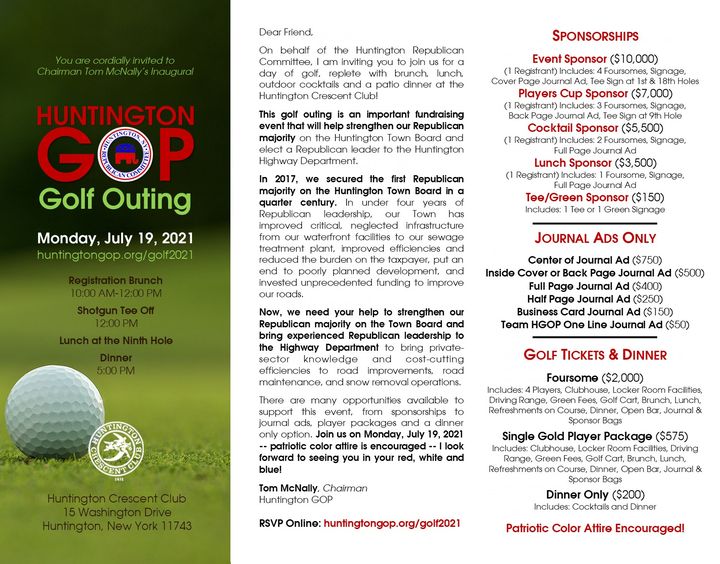