Lifestyle and wellness blogger Vanessa Steil has made huge strives since her 2013 diagnosis of papillary thyroid carcinoma at the age of 26. Now, just after of the six-year anniversary of her diagnosis, the Huntington woman is sharing her story in a new compilation called “TOUGH: Women Who Survived Cancer.”

“I gave the publisher the final version of the story on June 17, 2019, which is actually my six year, ‘thyroid-versary’,” Steil said. “So I felt like that was really perfect timing.”

Spearheaded by breast cancer survivor Marquina Iliev-Piselli, the book was released on Sept. 17 and is a collection of stories written by 37 women who were diagnosed with different cancers under the age of 40. Piselli approached Steil because of her blog, where she chronicled her diagnosis and health, LivingInSteil.com.

The now 32-year-old is the only Long Islander featured in “TOUGH,” and she said that she hopes it can be a helpful resource to people dealing with cancer.

“It’s very positive, it’s uplifting, it’s hopeful,” she said. “I think most people unfortunately have been effected by cancer, and the book offers something for everybody.”

Steil’s story started when she was in her late 20s at a routine annual exam at her gynecologist. He asked if he could perform a neck check on her, which she agreed to, and he found a nodule on the right side of her thyroid.

She was diagnosed with papillary thyroid carcinoma in March 2013, which came as a huge shock. “I definitely had days that were really difficult to endure the diagnosis,” she said. “I had days where I was in denial.” A few months later in June, Steil underwent a successful surgery and now she’s cancer free.

But because of her experiences, she has become an advocate for the cancer community with her site. The health and wellness blog started around the time of her diagnosis has maintained a steady following ever since.

“It’s funny because I actually wrote the blog in 2013 and when the editor came back to me for the book, I felt like it was so impersonal,” she said. “My perspective had changed so much in those six years that I really had to sit down and rewrite it.”

Steil added that it was a cathartic experience where she could reflect on details she didn’t mention in the past postings. “All those details that I thought weren’t important enough to put into the blog post ended up really making the chapter,” she said. “They were so critical that now when I look back I think, ‘how could I have not mentioned that?’”

Although the experience was hard at the time, some good has come out of it: her blog, friends, support and a new chapter in her life.

“I was working in higher education when I was first diagnosed, not really feeling fulfilled,” she said. “I started doing social media for my blog, then I got into marketing and now I’m in public relations… so it really was a catalyst for my entire life after my diagnosis.”

But followers and likes aren’t what she’s after when writing her weekly posts. She wants to help others who are struggling, just like she was.

”When I was first diagnosed, I was like, ‘wow why did this happen?’ and now I’m using it as an experience to help other people and that’s something that’s really rewarding for me,” she said. “The community I was able to build and cultivate from this experience, you know it helps you as a survivor, too… even though it’s six years ago, it’s still really inspiring to me when I am able to talk to another survivor.”

With already over 100 positive reviews on Amazon, the book is doing well. “Our hope, when we were putting this together, was that we wanted to give something to the cancer community that was not just a resource,” she said, “but it was something they could hold onto and look at, and give to their family members… hopefully it helps them cope with their diagnosis.”

Whether the readers are survivors themselves, Steil’s story – and the 36 others – is sure to inspire.

“I think it’s something that a cancer patient, survivor or loved one can really take and know that they’re not alone,” she said. “There are all these other women that are there for them and who have been in there shoes. I think it’s a great resource to have among the cancer community.” 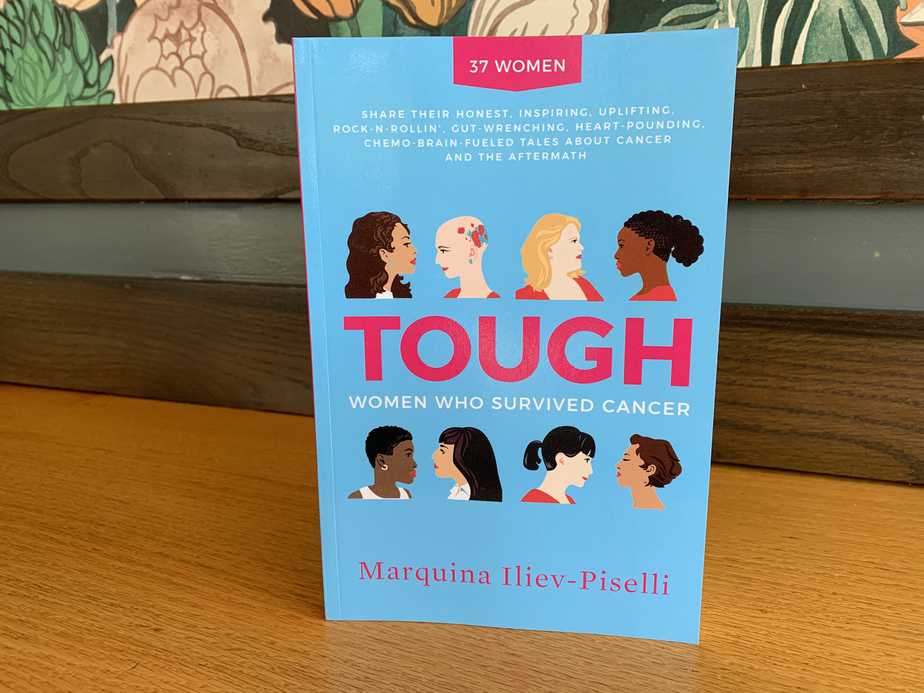 Julianne Mosher is a freelance reporter with HuntingtonNow