Huntington officials and families of those killed on Sept. 11, 2001 gathered Friday morning at Heckscher Park to commemorate  those lost who were lost. The town has added blue lights in the lamp posts at the entrance to Town Hall to honor those who died.

The 19th anniversary of the attacks were marked by solemn ceremonies around the country. In Hauppauge, a bell rang in honor of the Suffolk County residents who died that day. 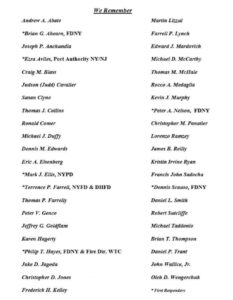