Clark Gillies, a member of the Islanders team that won four consecutive Stanley Cups in the 1980s and a National Hockey League Hall of Famer, died Friday, the team announced. He was 67.

Gillies was a resident of Greenlawn and a big supporter of Huntington Hospital, with a  pediatric emergency unit named for his foundation, the Clark Gillies Foundation. He worked as a business development manager at Protective Wealth Consultants in Huntington.

“On the ice, Clark Gillies was known as an enforcer, but to us at Huntington Hospital he was known for his friendship, generosity and work with children,” said Nick Fitterman, MD, executive director of Huntington Hospital. “Mr. Gillies was an extremely kind and tender person, really a big teddy bear. He would deliver gifts to children during the holidays, and he treated everyone he met with respect. His legacy will live on through the Clark Gillies Pediatric Emergency Unit at Huntington Hospital. Our thoughts and prayers are with his family at this time.”

“The Town of Huntington mourns the loss of Clark Gillies. He was a pillar of our community and a giant in the sporting world. His ice hockey career is legendary, eclipsed only by the great work he did after he hung up his skates. Clark always ensured that the spotlight reflected off of him onto a variety of worthy causes, including a new pediatric wing at Huntington Hospital.

“His larger-than-life personality made him a great master of ceremonies at countless dinners. He made everyone comfortable (only Clark could tell a joke about snails…).

“Our hearts and thoughts are with his wife Pam and his family. Clark will be sorely missed by his friends, the sporting world, and our community at-large.”

The Islanders drafted the left winger in the first-round in the 1974 draft, fourth overall. After several years with the Islaners, he  played a year and a half for Buffalo before retiring. 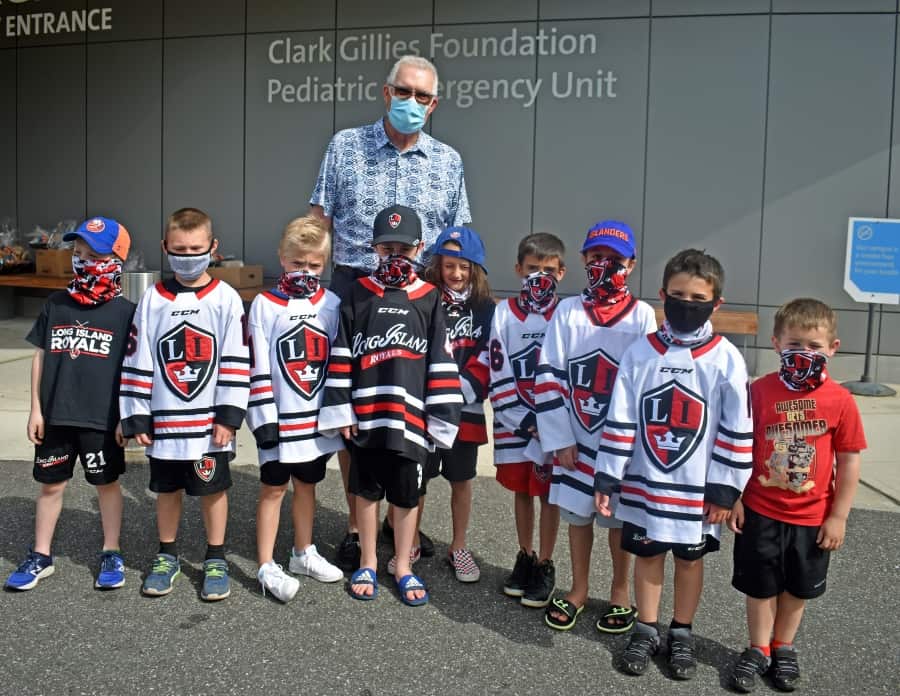 The Long Island Royals boys hockey team delivered breakfast Friday to the Huntington Hospital pediatric emergency department team and met Islanders legend Clark Gillies for whom this part of the hospital is named.