Gov. Andrew M. Cuomo declared a state of emergency Wednesday in Suffolk County and 11 other counties to provide funds for clean-up and operations after Tropical Storm Isaias, and ordered an investigation into state utilities.

“We’re taking an all-hands-on-deck approach and activating every resource at our disposal to expedite communities’ recovery from the impacts of Tropical Storm Isaias,” Cuomo said. “The State is working closely with local governments to help ensure they have the help they need to get back on their feet. We’re far too familiar with severe weather, but New Yorkers show their true spirit in times of crisis and we’ll prove it once more.”

PSEG-LI said 36,898 Huntington customers were without power as of 7;30 p.m. and said that many could be without power until Friday.  It also said that Thursday it is opening four  drive-through customer outreach centers with free water and ice, including one  at 288 Pulaski Road, Greenlawn.

Long Island Democratic members of the State Senate called for an investigation of how PSEG-LI handled its response to the storm and communication failures that kept many people from reporting outages.

State Sen. Jim Gaughran said Wednesday, “I’m outraged that PSEG dropped the ball on tonight’s storm response. PSEG’s website, text, and phone lines are down. I tried them for myself following desperate constituent calls for help. I now have constituents stuck — amid a pandemic & the summer heat — literally in the dark.‬”

“This is disgraceful. This was a tropical storm. What happens if a Level 2 hurricane hits Long Island? Tonight was PSEG’s first major test since they took over running our system — and they unequivocally failed.

“PSEG management failed on a multitude of levels tonight — from customer service to an accurate outage map. While out surveying my district I saw hard-working crews working to restore power. We are just at the start of hurricane season but PSEG’s incompetent management and failure to properly plan for events like today has left me tremendously concerned for PSEG’s capability to handle serious storms in the future. Get it together.”

The storm affected approximately 420,000 customers on Long Island, cutting . Approximately 176,000 customers remained without power as of 3 p.m. and called the storm one of the most powerful to hit the area in years. It said that  “PSEG Long Island understands how critical it is to share accurate and timely information with our customers. We have overcome many of the issues with Verizon that affected our call center operations yesterday, and we are working diligently to improve all of our systems to fully resolve these issues. We urge customers to use the automated voice response system whenever possible: 1-800-490 0075.”

Huntington Supervisor Chad Lupinacci said,  “Our Highway Department has been working nonstop through the night and day with support from our refuse crews, General Services tree trimming crews, and PSEGLI to respond to the 500+ trees, limbs and wires down and blocking roads. The damage is spread townwide. Late this afternoon we had almost 40,000 residents still without power and phone and internet service continues to be an issue in making service requests. Please keep calling or report downed trees and wires online to huntingtonny.gov/highway. Stay clear of downed wires and tree debris, as our teams can only move in to remove these blockages when PSEGLI crews remove the live wire hazards.”

It also estimated that 85% of customers will be restored by Friday. 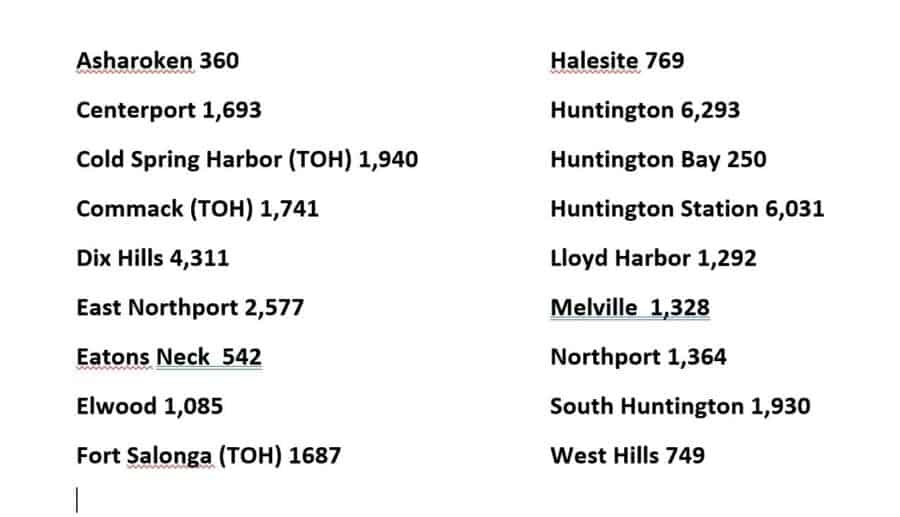 Ray Spatafora, head of security at Walt Whitman High School, called the inability to reach PSEG-LI on Tuesday “a disgrace,” and said when he finally got through on a phone line, the call was quickly cut off,

More than 2,000 lineworkers, tree trimmers and other personnel are working around the clock, in 16-hour shifts until every customer is restored, PSEG-LI said.

.Cleanup work continued Wednesday around Huntington, as crews and individuals cut up trees and removed debris and limbs from overhead power lines. 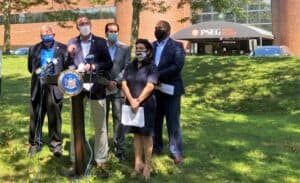 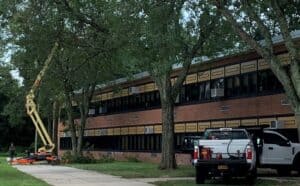 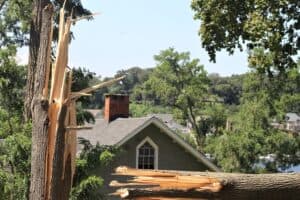 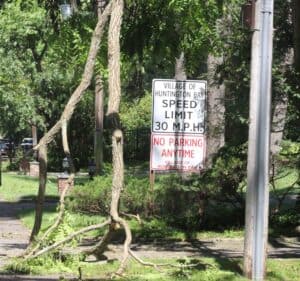 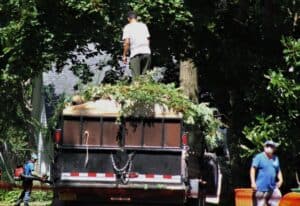