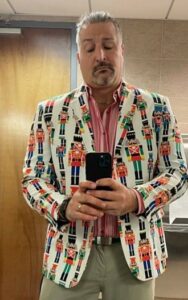 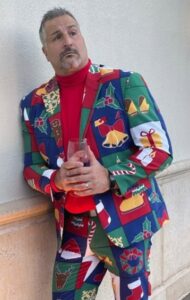 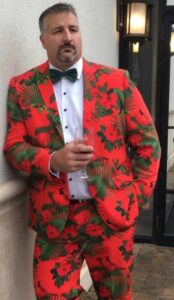 Rob Madden is a little hard to miss. At 6-4 and more than 300 pounds, he tends to stand out in a crowd.  But  the real tipoff is the suits –the ones with designs for Christmas, the Fourth of July, Halloween, St. Patrick’s and or going to a Jimmy Buffett concert.

Madden, a financial adviser for Merrill Lynch in Melville, said he got his start wearing Christmas suits  in 2014 or 2014, after amassing about 30 ugly Christmas sweaters over the years. He got his first suit, which he said fit to perfection, and went on from there.

“The reaction is fantastic,” Madden said. “That’s why I do it. I’m a failed standup comedian but this is putting smiles on other people’s faces. People say, ‘I wish I could do that’.”

Madden originally went to the Naval Academy but soon learned he was color blind, which restricted his career choices. After leaving the academy, he earned a finance degree, which led him to New York City. On Sept. 11, 2001, he was working at 75 Wall St. when the World Trade Center was attacked. He fled the debris; the next day he learned that a friend who had the job Madden had aspired to had been killed in the attack on the Pentagon.

“If I had gotten what I wanted, I would have been dead,” he said. “This is a second lease on life.”

He met his second wife, Jade, a teacher and moved forward. “I’m not saying that’s why I wear these suits,” he said. “But it’s just been an awesome ride. I’ve always wanted to inspire others. They’re a part of my personality.”