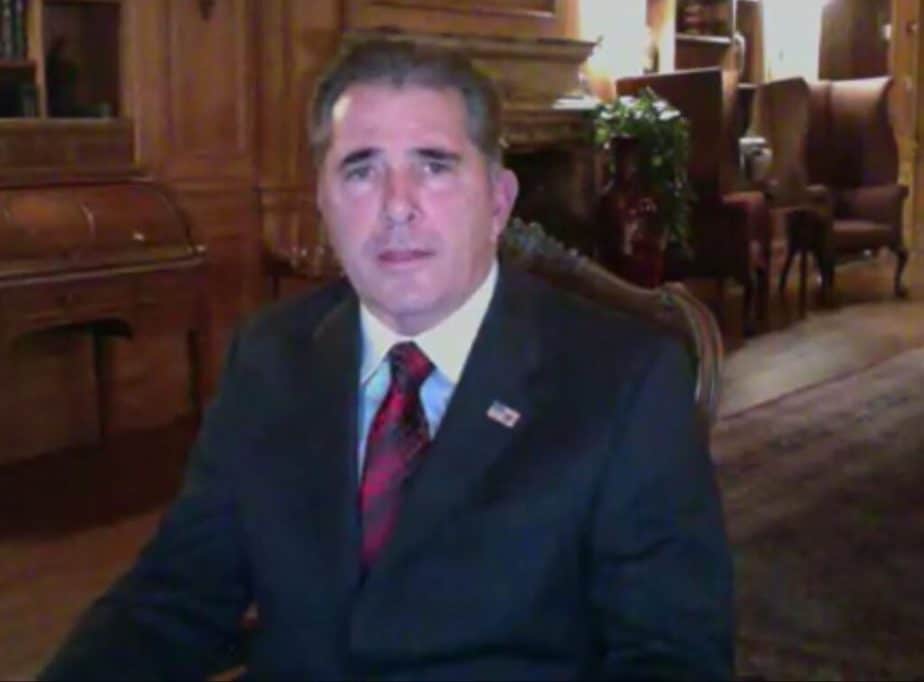 Previously an Independent who often voted with Republicans, Cook joined the party a few months ago after smaller parties lost their position on the state ballot.

While calling Supervisor Chad Lupinacci a friend, Cook said he felt that the issues that his fellow Republican faces were a problem.

“The supervisor has major issues,” he said. “I genuinely like him. But he’s gotten so much bad press and has negative issues. It’s very bad for the future of Huntington.” He said polls conducted in Huntington showed the need to replace Lupinacci, who is facing a civil suit by a former aide from his days in the state Legislature who accused him of sexual harassment. And just last week, a separate independent report said a different complaint involving a town worker was unsubstantiated but questioned the forthrightness of several witnesses.
Cook cited his work in the LIPA lawsuit, as well as assistance to senior citizens and to veterans as examples of his leadership.
Meantime, Lupinacci condemned Cook’s poll, which according to Newsday, suggested that the supervisor had withheld critical information and asked, “Do you believe there’s a cover-up by Supervisor Lupinacci?” Another question asked: “News articles on Supervisor Lupinacci’s past actions have classified or referred to him as a molester, a sexual predator, abusive and showing unprofessional conduct. Would you be less likely to vote for Lupinacci knowing these terms were used, or does it make no difference?”
Lupinacci said on Facebook, “I learned this week of an outrageous push poll authorized by my colleague on the Town Board, Councilman Eugene Cook.
“This poll contains false and defamatory statements; it goes outside any norms of acceptable conduct, even in the rough and tumble world of politics. This type of behavior is exactly what repulses so many Americans about the current state of our political discourse.
“It has been my practice as an elected official to take the high road and ignore or refrain from the insults and accusations that now seem customary in politics because the residents of Huntington deserve far better than having their leaders operate from the metaphorical gutter. While I will continue to occupy that moral high ground, even in the face of unsavory attacks, I must push back when lies are circulated with the intention of impugning my character and integrity.
“The accomplishments I have achieved during my inaugural term as Supervisor are numerous and significant and in three short years, we have changed the direction of Huntington for the better. If Councilman Cook disagrees, he is entitled to express that disagreement through the political process in a dignified and respectful manner — he is not entitled to spread disinformation and launch ad hominem personal attacks.”

Cook’s announcement was livestreamed from Oheka Castle, where he emphasized first that he wasn’t interested in running for the Suffolk County 18th Legislative District. Democrat Mark Cuthbertson has already declared his candidacy for that job.

Huntington Republican Chairman Tom McNally said, “Primaries are a part of politics in our election cycle. We’re  in the process of screening for our ticket and will use all our due diligence to make sure we have the strongest ticket.  The important thing is, we’re stronger as a unified party.”

The Huntington Republican Party has not announced its endorsements yet. Democrats have endorsed Rebecca Sanin as their supervisor candidate.