A vineyard in Northport continues to spur opposition as neighbors point to streets jammed with cars while the vineyard owner insists he’s doing everything he can to resolve problems.

Dozens of residents protested at a Town Board hearing last week, with several addressing  the board and showing photos of cars and pedestrians going to and from the Del Vino vineyard. Photos show cars parked bumper to bumper in the neighborhood.  Some residents say vineyard patrons block their driveway, speed through the neighborhood or urinate on their lawns.

In early August, the town board proposed creating no-parking zones in the neighborhood, but the vineyard’s attorney spoke against the limitations, saying they were targeting the vineyard’s hours of operation.

The proposed hours for restricting parking are: Monday-Friday, 4-11 p.m., and Saturdays and Sundays, 1-11 p.m., on several streets in the vicinity of the vineyard at 29 Norwood Road.

The parking restrictions are “Specifically tailored to coincide with the normal operating hours of the vineyard,” attorney Anthony Guardino said, “and are being advanced solely due to residents complaints and not based on a finding of health and safety risk by the town’s highway department.”

And Del Vino owner Fred Giachetti, noting that he lives in the neighborhood, said he is trying to work with residents to find solutions to the parking problem. He said a handful of residents are not trying to find answers. “They want to close us down and not work with us,” he said.

Guardino said the board was acting prematurely because a plan that would add more parking spaces on the vineyard property was recently approved but the impact hadn’t been assessed yet.

He said the parking regulations weren’t consistent with state agricultural rules because the vineyard was designated by the county as an agricultural district and approved by the state. And he said soccer games and school events drew a considerable number of cars. “People don’t seem to have an issue with those cars, they only have an issue with the cars that are parked for the vineyard,” he said.

When Guardino referred to the vineyard’s “farm operations,” several members of the audience guffawed and said that the site functioned as a bar.

The vineyard has been a source of contention from before its opening in November 2018. Local residents and some town officials opposed its opening next to Norwood Avenue School but the agricultural designation limited the town’s powers to restrict its development.

“It is a real conundrum for us, because they have used an exemption from a lot of local regulations and it put us in a really difficult situation because some of the normal land use tools that we could use were not available to us,” he said. “And now we have a situation where basically the vineyard’s parking lot is the surrounding neighborhood.

The Del Vino owner has “a great idea and it’s working but he’s disturbing his neighbors,” Cook said.

Resident Roy Kennis said, “When Del Vino has events, the street comes a Grand Central Statio of parking. Any sense of privacy is gone. People come from all over Nassau and Suffolk County. People are walking in the streets; people trample our lawns because there are no sidewalks. This is causing a steep and serious decline in resale value.”

Another resident said, “This has forced people change their lives. They can’t get in and out of their driveways. It’s our neighborhood. We want it back.”

Giachetti said a small number of residents have complicated the parking problem, sayig they have stymied his efforts to fix it.  He said they had persuaded the school district not to allow him to lease space at other businesses and at the Norwood Avenue School parking lot on the weekends.

But schools superintendent Robert Banzer said, “The owner of Del Vino Vineyards did approach the school district regarding the possibility of leasing Norwood Avenue’s parking lot to alleviate parking concerns; however,  use for this purpose is not  in accordance with  Board of Education policy and New York State law.”

Giachetti also said his business provides numerous benefits to the community, employing about 45 people, raising funds for the school district, donating to food pantries and supporting the PTAs.

A few days ago, the vineyard announced weekend shuttle service to the vineyard, and wrote on Facebook, “If our gates are closed, please do not park in the neighborhood and instead head to the shuttle location.” Response to the shuttle plan was positive, with commenters thanking the business for considering its neighbors, and one commenter writing, “Great idea with the shuttle service, we always take the short cut down Norwood to go to Crab Meadow Beach and always see thousands of cars parked all over…shuttle bus is a wonderful idea.” 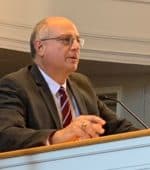 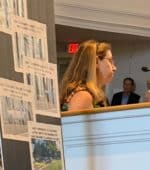 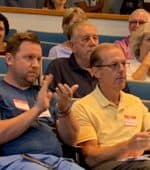