GreenDrop, an organization that takes donations to fund charities,  will be setting up next week in a parking lot at Walt Whitman Shops, its first Long Island location.

Janine Carruthers, director of community relations, said that the organization is partnering with Big Brothers Big Sisters and will accept gently used clothing, shoes and household items. Donations are tax deductible, and will be accepted seven days a week, from 10 a.m. to 5 p.m.

The GreenDrop trailer will be set up in a parking lot near Panera, and will take five to seven parking spaces, she said.

“It’s a great way to declutter, to help the Earth, and help a local nonprofit,” Carruthers said. Donations will be accepted by an attendant, who will provide a tax receipt, and then sold to thrift shops, which recycle, repurpose or reuse them, she said.

A grand opening and ribbon cutting are planned for April 22, which is Earth Day, at 10 a.m.

Whitman will be the organization’s 40th collection site. The rest are in locations from New York to Virginia. GreenDrop has partnered with a variety of organizations, including the Red Cross, the National Federation of the Blind, Society of St. Vincent dePaul and Military Order of the Purple Heart. It plans another site for Smith Haven Mall. 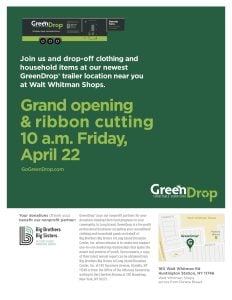 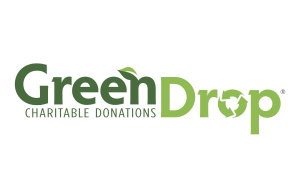