Hundreds more voters turned out Sunday in the cold rain cast their ballots on the final day of early voting. Poll workers t the Huntingon public librry Station branch moved to the end of the line at 3 p.m. to stop late arrivals since, by law, voting ended then. Anyone in line at that point was allowed to continue.

A woman who arrived a few minutes after 3 p.m. lobbied to be allowed to join the line,  saying she’d driven out from Queens in the rain to be able to vote, but the workers politely but firmly told her the law wouldn’t allow it. About 170 people were in line at that point. The very last person in line said she wanted to be sure her vote got counted, and a man in line said he was voting early to “see democracy flow.”

A woman feeling the damp chill arranged for an order of  Dunkin’ Donuts coffee to be delivered to her in line.

Voters toward the front of the line said they’d waited about 2 and a half hours, while others said the wait was longer Sunday morning.

Most of those asked why they were voting Sunday when they could vote Tuesday  said they would be too busy on Election Day while others said they feared the wait might be even longer on Tuesday. 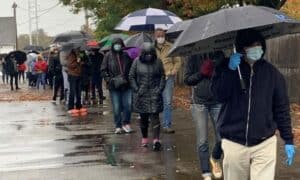 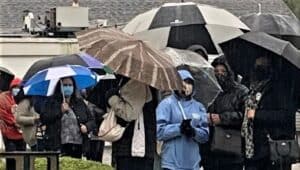