Huntington’s celebration of Columbus Day kicks off Thursday with a flag raising and laying of a wreath at the Christopher Columbus statue on Main Street.

The celebration is the start of the long state holiday weekend, as the Long Island Fall Festival returns after a year’s absence, running from Friday through Monday in Hecksher Park.

On Sunday, Italian Americans will show their pride in their heritage with a parade that begins at Main Street and Park Avenue at noon and proceeds west along Main to West Neck Road. The parade, sponsored by the New York Grand Lodge, Order Sons and Daughters of Italy in America, is hosted by the Town of Huntington and the Huntington Township Chamber of Commerce.   The theme for this year’s parade is honoring “Columbus and America – The Truth Will Persevere Forever!”

The parade, with dozens of units and marchers and floats bedecked with Italian themes, will pass by Heckscher Park as the third day of the Long Island Fall Festival is underway. The festival, featuring music, food, children’s activities, entertainers, 300 vendors and more, opens Friday at 5 p.m., running until 10 p.m. On Saturday and Sunday, 11 a.m.-9 p.m. and Monday 9 am-5 p.m.

The Thursday ceremony begins at 5 p.m., but will move indoors at Town Hall in the case of rain. 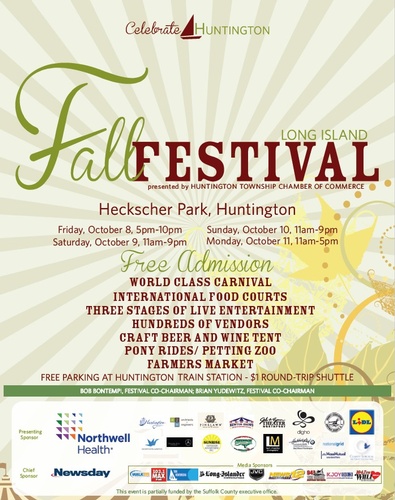