The group Save Huntington Village has lambasted Councilman Sal Ferro, one of the sponsors of legislation to permit legal basement apartments again, in a flyer that shows rundown housing labeled as “Ferroville.”

The flyer and a related email make accusations against Ferro that he fiercely denies.

Ferro and two fellow council members, Dr. Dave Bennardo and Joan Cergol, had proposed allowing legal basement apartments. A public hearing was originally scheduled for the Jan. 4 Town Board meeting but supporters want to pull it from the agenda to make some adjustments before proposing it again.

Basement apartments as accessory dwelling units had been permitted until 2019, when new units were banned, one of three changes made at the time to town housing laws.

The flyer and email on the topic referred to Ferro as president and CEO of Alure Home Improvements.

“Huntington Town Board member Sal Ferro is also President and CEO of Alure Home Improvements. Basements are and always have been a big part of their business,” the flyer says.

Ferro, however, has said previously that he resigned his positions in November, 2021, before he was elected to the Town Board.

He said, the flyer was “not only erroneous but showed a lack of integrity” and called the the group’s flyer as a “cowardly anonymous mailer. If they were so concerned they’d put their name on the mailer,” he said.

Supporters have said that numerous illegal basement apartments already exist, and that legalizing them would ensure safety rules were enforced.

Ferro said his support for basement apartments was threefold:

“First, they would help create affordable living space so youth can stop leaving Long Island” and second, “provide senior citizens a way to help pay the taxes on their home,” he said. Third, he said, legalizing them would “provide a safe pathway to do basements. We all know people are putting apartments in their basements illegally.”

The email reads, “There is no doubt Ferro and his company stand to make huge profits from this latest sweeping change to Town Code to allow basement apartments, ensuring his 2023 starts out strong, while Huntington residents are left holding the bag. Indeed, it is seeming more and more as though Mr. Ferro campaigned to be elected to town government for the sole purpose of enriching himself, his own company, and his developer friends. Rarely has this long tradition of hypocrisy in Huntington’s Town Government been so thinly-veiled and we demand that Mr. Ferro recuse himself from any vote that might result from this hearing.”

The flyer includes a story from a trade publication in 2008 about Ferro’s basement business, as well as references to a fatal fire in an illegal basement apartment in North Patchogue in 2019, and a clip of a New York Times story on the deaths of several people living in basement apartments when the torrential rains of Hurricane Ida hit New York in 2021. Most of those deaths occurred in illegal apartments, the Times reported.

The other changes made in 2019 involved allowing homeowners to live in their accessory apartments and rent out the main unit, and a reduction in minimum property size requirements. 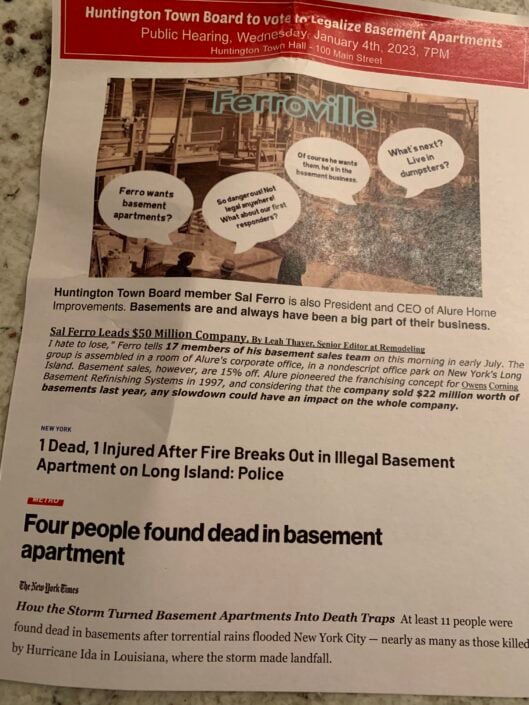 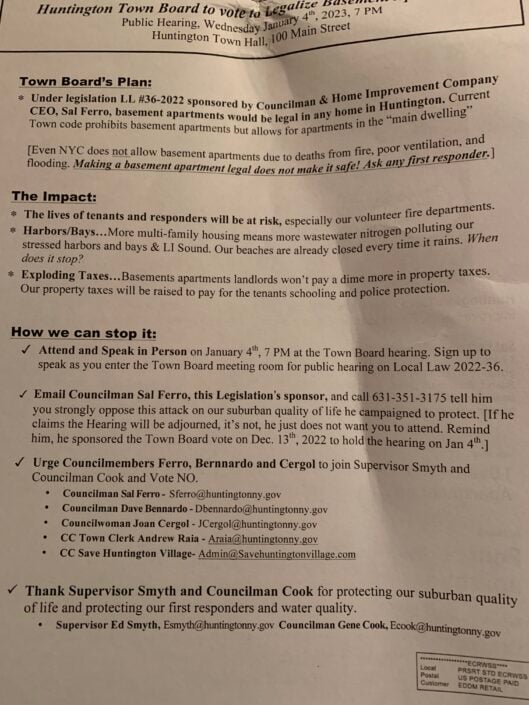