Donnelly joined the family, friends and fellow members of Boy Scout Troop 708 to honor Henry A. Rivas for his Eagle Scout title, where he received many accolades for his distinction and a proclamation.

“I commend Mr. Rivas on an innovative and important project and for earning the well-deserved rank of Eagle Scout,” said  Donnelly. “He has demonstrated leadership, character and a true commitment to community.”

The 2019 Half Hollow Hills High School East graduate’s Eagle Scout project was also noted, as he constructed two rabbit hutches for the Brookhaven Ecology Site, Park and Nature Preserve. The Animal Preserve helps to educate the community and has more than 100 injured and non-releasable wild animals and farm animals for viewing.

The project, entitled “Every Bunny Needs Some Bunny,” was completed in 415 total project hours.

Lupinacci also presented Henry Rivas with a proclamation and a pin of the Town of Huntington Seal.

“Henry’s dedication to animals, preservation and his community is demonstrated through his Eagle Scout project, consisting of building two rabbit hutches for the educational Holtsville Ecology Site and Animal Preserve,” Lupinacci said. 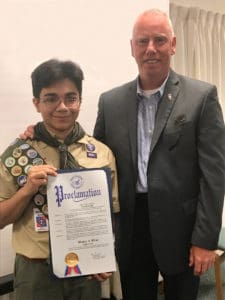