A recently released book by Hofstra University professor of psychology Dr. Jeffrey Froh focuses on the issues young adults in their 20’s go through in modern-day times by sharing student, client, and personal stories.

The Greenlawn author’s book is “Thrive: 10 Commandments for 20-Somethings to Live the Best-Life-Possible.”

As Froh has noticed throughout his research, the constant feeling of needing approval from others, social media addictions, and isolation are only a few of the limitations young adults are faced with.

“I’ve worked with some phenomenal students, but I also learned how hard they were really struggling,” Froh said. “It’s crazy, we all walk around thinking everything is fine, but it’s really not for a lot of people.”

After discovering his passion for positive psychology, Froh became interested in people who excel in life, and how they do it not, particularly through their careers, but throughout their personal lives. He wanted to learn exactly how people are able to thrive.

When Froh was in graduate school, the science of studying human excellence hit the scene, and he knew it was something he needed to pursue. In 2010, Froh created a positive psychology clinic and has continued to teach the topic since.

“By the time I really started to see behind the scenes, and see how hard younger people really were struggling, I wanted to turn my attention to them and hands-on help them, which is why I created that clinic,” said Froh. “People are so unbelievably lonely, and it just kills me to hear that some people only have one or two real friends, which in itself is so rare.”

Discovering more about the struggles young adults face, Froh felt inclined to take the information he had gathered into print, wanting the book to reach as many people as it could. The book is divided into sequential order, how to thrive personally, socially, and spiritually.

“The first part talks about how to figure out where you’re going in life, and if you can do that, then you’re in a better place to connect with people socially, and if you accomplish that, then you can really pursue the higher purpose, which is mastering your mission,” said Froh.

Becoming interested in helping the younger generation was a goal in Froh’s life that culminated before the pandemic. One of his favorite ways to learn about not only his students but 20-year-olds, in general, was a “walk and talk” around campus.

Simply enough, Froh had a special path he liked to take around campus and would learn about his students’ lives, giving him more insight on how he could help. He later learned psychology wasn’t his only passion but also fell in love with writing.

“In my office at home while writing Thrive, I’d have the door shut during one of my writing processes, and when I was done, my kids would say ‘Daddy we heard you go WOO!’ because I would do that by myself when I would get that right word!” Froh said.

Froh said it was odd to so suddenly fall in love with writing after spending so much time setting up his clinical. However, he felt it was necessary to shut down his courses when he discovered writing Thrive became more important to him.

“I became obsessed with writing Thrive, I brought a notepad and pencil with me everywhere I went,” Froh said. “I also always had the notepad on the nightstand, and in the middle of the night I’d wake up with an idea to write down. My wife and I had a running joke that I was good at writing in the pitch black.”

After four years of piecing together Thrive, talking with students, and facing his own personal issues in life, Froh’s book is readily available to read on Amazon and Barnes & Noble.

“I cannot tell you how much I don’t care about the money, what’s important here is the message this book brings, and how many people it can help get to their next level,” he said. 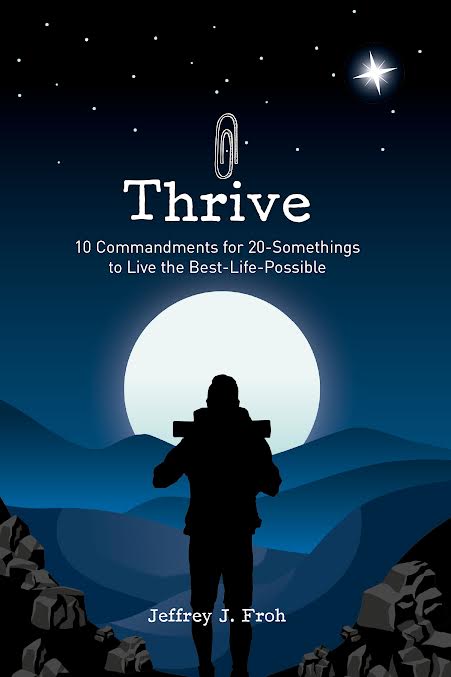