Samuel Ballton was the pickle king, no doubt. But his accomplishments didn’t end there.

Born into slavery in Virginia in1838, Samuel Ballton escaped, returning multiple times before succeeding in rescuing his wife, Rebecca, and fleeing to freedom. He joined the Union army, serving in several battles throughout the Civil War, before moving to the Huntington area in 1873.

He began working on a farm, became a sharecropper and later a buying agent for a pickle house in Boston. He was able to buy a piece of land where he grew cucumbers, and like other Long Island farmers shipped his produce to a farmers market in Queens. When a blight hit the cucumber crops, Ballton found a variety that would survive it, sharing information with other farmers whose crops were affected.

He also built homes, several of which survive to this day, including those at 30 and 34 Taylor Ave., and 67 ad 75 Boulevard.

The self-made businessman was named “Greenlawn Pickle King” in 1899 after growing 1,500,000 pickles in one season.

The Town of Huntington took steps last week to honor him by renaming part of Boulevard Avenue in Greenalawn as Samuel Ballton Way in celebration of Juneteenth.

“We are honored to recognize the unique American success story of former Greenlawn resident Samuel Ballton. Born into slavery in Virginia in 1838, Mr. Ballton overcame great adversity and heroically rescued his wife from slavery soon after escaping it himself, then went on to serve in the Union Army for the remainder of the Civil War before settling in Greenlawn to become a successful farmer and landowner,” said Supervisor Chad A. Lupinacci.

“Mr. Ballton had a hand in developing this growing community at the turn of the 20th Century and his life story reminds us all of what is possible in this great nation.”

Councilwoman Joan Cergol said, “The most talented screenwriters couldn’t come up with a film as incredible as the true life story of Samuel Ballton. He was a brave veteran, a brilliant entrepreneur, and a pivotal figure in our Town’s history. I am honored to have helped dedicate a portion of Boulevard Avenue as Samuel Ballton Way in his great memory.”

Councilman Ed Smyth said, “Samuel Ballton is not just an inspiration to the African American community; he is an inspiration to all small business owners. He literally started with nothing, and through his own enterprise and the indispensable help and motivation of his wife, Rebecca, he built a small empire. He was a risk taker, a developer, a farmer, an entertainer; he ran a hotel and a livery; he was a philanthropist and a visionary for Greenlawn and the surrounding areas. This recognition is long overdue and well deserved.”

Several of Ballton’s descendants attended the ceremony to unveil the street sign in his honor. 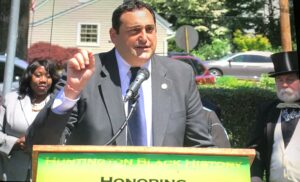 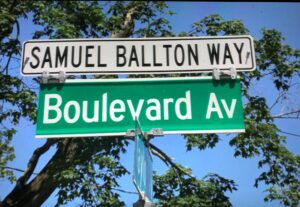 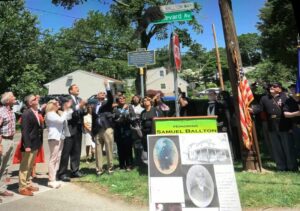