The hospital also achieved a national ranking of 48th in orthopedics, putting Huntington in the top 1 percent of hospitals around the country.

“You have been very, very good for a long time,” Dowling said, “But you need to get public recognition. We have a commitment to move up the rankings. You always want to be No.1.”

While complimenting the staff for its accomplishments, which include multiple Magnet designations for its accomplishments in nursing care, and recognition for its emergency department care for geriatric patients, among other achievements, Dowling encouraged them to work toward achieving top rankings in more specialties.

Overall, Northwell Health hospitals achieved national rankings in 23 specialties in the report, which was issued in July. The study ranked nearly 5,000 hospitals around the country on 16 specialties.

Dr. Nick Fitterman, executive director of Huntington Hospital, said, “Two ingredients make this happen: the people and the culture, with an unwavering commitment to patients.”  While Huntington was 12th ranked in the state, he said, the next community hospital was 25th on the list.

Dowling also spoke passionately about gun violence as a public health issue, citing the deaths of more than 40,000 Americans a year to mass killings as well as  gun crimes, suicides and the mishandling of firearms. “We are not talking about the Second Amendment here, but this is a health issue that we must face, the trauma, the psychological damage. We have a big responsibility in the community and we need some leadership.”

Noting he is involved with a conference in December to bring together health care leaders to discuss the problem, he said. “We’ll see who’s too scared to stand up and talk about this issue.”

Dowling has taken a leading role in talking about the human cost of gun violence, contrasting the extensive attention paid to vaping deaths recently with the far larger number of deaths from guns. In an interview with Newsday Friday, he said hospitals around the country deal with about 1,600 cases a week of trauma and serious injury resulting from guns.  “So the statistics are extraordinary … the stats are only part of it, it’s the human suffering … so why isn’t this a major issue that is looked upon as a public health crisis?”, he said to Newsday.

Fitterman and Dowling also talked about Huntington Hospital’s plans to expand in Greenlawn with a new cancer center that will help patients receive care locally instead of traveling into New York City.

“Competition is good. It forces us to get better,” Dowling said. “In a community like this, everyone (medical systems) wants to be here.”  He and Fitterman want Huntington Hospital to provide residents with what they need right here.

They also said that among the hospital’s many projects for the future are plans  to renovate the orthopedics area of the hospital and  an embrace of  a variety of tele-services, including stroke diagnosis and behavioral health services, which are designed to deliver care more quickly and resourcefully.

Patients offsite could receive a diagnosis of an ailment from home, or patients brought in for treatment can be assessed by specialists located elsewhere who have access to medical tests and an on-screen view of the patient.

Dowling said  the expansion of non-ambulatory services will function as “the front door” to care.

The hospital also plans expanded neurological services and to continue its assessment  of emergency department patients for addiction problems and to expand on food-for-health program started elsewhere in the Northwell Health system to ensure patients receive adequate nutrition after leaving the hospital. 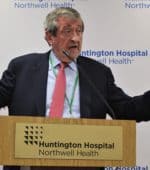 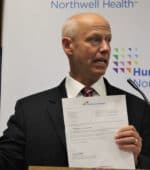 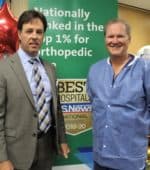 Street Renamed in Honor of Key Benefactor of Huntington Hospital