Molly Prep is a leukemia survivor who wants to share her story with the world and has written a
book called Cancer Angst: A Memoir.

Her book follows her experience that started in childhood when she began cancer treatment at age seven, and later in her teenage years when she went into remission.

Several factors went into the decision to write and publish her book. The main reason was that for Molly, the transition away from the hospital was super disorienting and once she had left the “thickness” behind, it wasn’t  talked about anymore. This left her with unfinished feelings that followed her from the hospital to home.

Molly works as a teacher’s assistant at NYU and works with professor Dr. Elana Spira in a Literature of Children and Adolescents class.  Spira had a student who was also a cancer survivor and was looking for books for children who were sick or facing their own mortality. Her teacher, knowing parts of Molly’s story, reached
out to her for any resources she might have or find. When she went to look ,she realized those types of
stories largely went untold.

So Molly went out and reconnected with other survivors. “This made me realize that the voice that I was looking to hear and the voice that students like this one could relate to, wasn’t out there.

“I think being vulnerable and sharing our own experiences if and when we’re ready to do so can really be a powerful thing.”As a result, Molly started giving guest lectures called Illness Unillustrated and has become a part of the class ever since.

She also wanted the book because “It’s a story I wish I could have read when I needed it.”

For Molly, realizing that she could provide that support for someone else, pushed her to get her story out. “I think, though, my story is specific because it’s a memoir, and I’m writing about what I went through, there’s a lot that other people can connect to as well. One would be how we hold our past with us and how we move forward.”

Realizing that she was ready, willing, and able to share her own stuff compelled her to do so because “there’s no way of knowing how something will land when you write it and share it. The potential for that being meaningful to even one person would make all the difference.”

After graduating from high school and talking more openly about her experiences, she felt the need to
get it on paper. She started to write but not with the motive of creating a book. “I started writing about
different memories I had, including things I was currently facing. I used National Novel Writing Month
and wrote 50,000 words in 30 days but put it aside for a couple of years.” After graduating college she
went back to writing, revised it, and decided that it was something she wanted to share with people.

Molly was diagnosed with ALL (Acute lymphocytic leukemia) when she was seven years old. “It came out of the blue. I had otherwise been active and hadn’t had any other health problems except for minor illnesses. During the time my cancer symptoms started showing, I also had strep.”

Molly and her family thought her symptoms were just related to strep. The symptoms included “tremendous fatigue and paleness.” With further testing, she found out, those symptoms were from cancer.

After finding out she had cancer, Molly was almost immediately put into a hospital. For the next
3 years of her life, the treatment was intense. “I missed most of the second grade. I spent most of my time
in the hospital and occasionally went home.” During this time, Molly experienced a lot of physical and
emotional changes, like the loss of her hair. She was able to stay in touch with a few friends but “felt very
distant because of the way I looked. I felt like I was going through something that I didn’t know how to
explain. I couldn’ see them regularly and hang out with them because my immune system was struggling.
A lot changed in that first year.”

The next two years changed from what Molly went through in the first. She started going back to
school more and she really enjoyed that. “I love being surrounded in a learning environment, so getting
back to that gave me a taste of normalcy.”

During this time, she was also going through chemo which “was not very pleasant.” At one point I had to relearn how to walk because my body was so weak.”

Though the hospital gave her an opportunity to get better, it also caused pain and trauma. “One time, I
woke up in the middle of a surgery because of the anesthetic.” She went through many procedures
without her permission because as a child you don’t really have a say in these sorts of situations, and for
Molly, it was invasive and overwhelming.

After meeting new people at school, Molly decided that she wanted to stop telling people that
leukemia was a part of her life. She saw this as an opportunity to start over. “I pushed all the cancer stuff
to the side even though it was very much a part of who I am.” Over the next few years, she tried to figure
out who she was and what she was capable of. She still felt very disconnected because she was not going
to the hospital that much and had lost touch with the friends she had made there.

Trying to shut this part of her down manifested itself in the form of disordered eating in high
school. “I became very restrictive on what I would eat. I would try to justify why I was alive when I knew
everyone who is diagnosed with cancer does not have the same outcome.” In Molly’s junior year, her high
school, Huntington High School, introduced Relay for Life for the first time. This event is made by the
American Cancer Society, where people fundraise for research, cures, and services to people affected by
cancer, both patients and caregivers.

“I ended up getting involved with that and walking the survivor lap which opens the relay. That was sort of my big reveal to my peers and teachers. It was very freeing.” This was a changing point for Molly. After this, she changed her relationship with food and started to be a little more open about her experiences.

The book ends with Molly getting a tattoo. “My tattoo says survivor in the shape of a ribbon
because, by the time I was 18, I realized that cancer is a piece of me but it is not the only piece.”

She is having a book launch party at the Huntington Public Library at 2 p.m. Sunday. 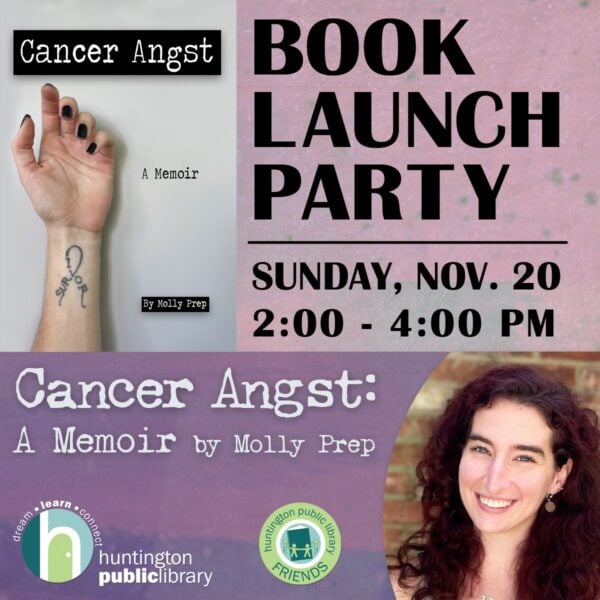