Huntington taxpayers could save a bundle under a State Senate bill that prevents LIPA from collecting back taxes should the utility win its challenge to the Northport power plant’s tax assessment.

The State Senate easily passed the bill, S5122, during each of the last two legislative sessions. The assembly’s companion bill A7786 has faced a different fate. Industry lobbyists have waged fierce opposition to the bill, including LIPA itself. Not all of it, though, appears to be as fully and publicly documented as state ethic laws that govern lobbying require.

LIPA retained Millennial Strategies in 2019 specifically to fight the bill A7786, according to records obtained through a Freedom of Information Law request. However, the state has no record of that activity.

Walter McClure is the communications director for the New York State Joint Commission on Public Ethics. The commission’s mission is promoting integrity to help those in public service understand their ethical obligations.

“We don’t have filings documenting that relationship,” he said. “I cannot say whether it’s a violation, but generally if we think activity has not been disclosed, we have a process to reach out to whomever may not have filed and the end result could be a financial penalty.”

McClure said he could not comment on a specific matter. Anything investigative is confidential by statute, he said, unless the commission votes to allow the information to be made public.

Speaking generally, McClure stated that under Legislative Law 1-A, known as the Lobbying Act, both the client and lobbyist are required to submit activity reports to the state. Filings are required when annual compensation or expenses for lobbying cumulatively exceed or are expected to exceed $5,000.

LIPA spokesman Sid Nathan defended Millennial Strategies in an email response to questions about the issue.

“Millennial Strategies has filed their compliance with JCOPE and listed LIPA,” Nathan said. He suggested that the Joint Commission staff members were confusing LIPA and PSEG.

Nathan’s explanation, however, prompted a quick rebuttal from the Joint Commission on Public Ethics spokesperson. The commission has PSEG filings, McClure stated, but none of it is related to the Millennial Strategies and LIPA relationship.

“The filings you see in our system are as they are submitted by a lobbyist or client filer,” he added. “The bottom line is there are no filings to document this.”

The records missing from the state’s database includes the Client Semi-Annual Report from January to June 2019 on July 31, 2019, a document signed by James Miskiewicz, LIPA’s deputy general counsel. 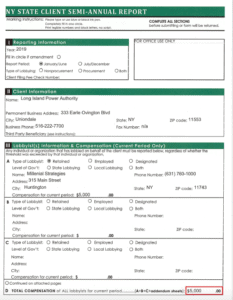 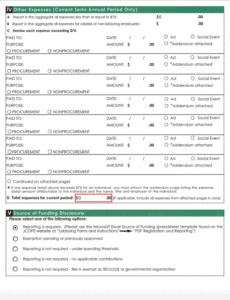 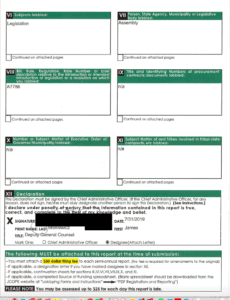 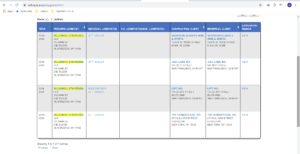 Screen shot of Millennial Lobbying provided by the Joint Commission on Public Ethics.

Millennial Strategies website shows that the company specializes in campaign strategies. It lists LIPA on the site as one of its clients. However, lobbying for LIPA or for the bill A7786 is not among the four entries listed in the state’s lobbying database for Millennial.

Jeffrey Guillot and Alex Voetsch are partners in the business, which operates out of two offices, 85 Broad St. in the New York City’s financial district and 315 Main St., Huntington.

Voetsch said in a telephone inquiry that Guillot, who he said works out of the Huntington office, dealt exclusively with LIPA. Guillot could not provide a comment by press time.

LIPA paid for a Facebook petition campaign launched in May 24, 2019, according to information posted on the Facebook ad. The post, entitled Long Island Tax Fairness, does not indicate which lawmakers, if any, would receive the signed petitions or who coordinated the call to action petition effort. The group still maintains a website longislandtaxfairness.com. LIPA and five other groups are reportedly responsible for the initiative. 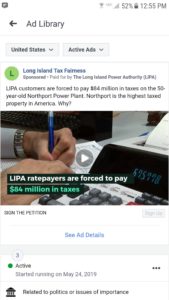 It’s unclear why the semi-annual client report was completed and provided through a Freedom of Information Law request, yet the state has no record of the filing. LIPA provided only this one record for its January to June 2019 lobbying activity.

Records also show that LIPA’s CEO Tom Falcone and LIPA’s Director of Customer Service Oversight and Stakeholder Relations Michael Deering were actively involved with monitoring and discussing the bill. Deering met on May 31, 2019 with Guillot and spoke with him on May 24.

He said he has talked with a representative from Millennial about his bill, but not recently. Stern said he’s unfamiliar with the specific filing details related to LIPA and Millennial. But, transparency and accountability are important, he said.

“Any entity that lobbies has a duty to report activity,” he said.

He encourages anyone involved in lobbying to fulfill their duty as the law requires, no matter who it is.

Stern said that he’s been working with all levels of government on a bi-partisan solution to the tax lawsuit situation. The majority of the Long Island delegation, he noted, are co-sponsors of the bill.

“As a Huntington homeowner myself, I understand the implications of dramatic increases in property taxes and the unacceptable impact that loss of tax revenue will have on our local school districts, which are the pride of our communities,” he said.

Sen. Jim Gaughran, the bill’s original State Senate sponsor, said that the bill has become a critical piece of legislation.

“This bill would protect taxpayers from being bankrupted by LIPA’s reckless tax certiorari challenges,” he said. “It will protect the community and our schools from LIPA.”

The Northport-East Northport School District is a bill proponent. It has lobbied in favor of the legislation, as reported on the state’s lobbying website. But other communities are also behind it.

“The decision by the presiding officer not to call the settlement with LIPA is a direct result of the bill in the State Senate,” she stated. “If passed, we believe it would have an impact on the settlement.”

The Corporations, Authorities and Commissions Committee is currently reviewing the bill with the assembly’s legal counsel, which is where the bill stalled in Albany’s 2019 legislative session.