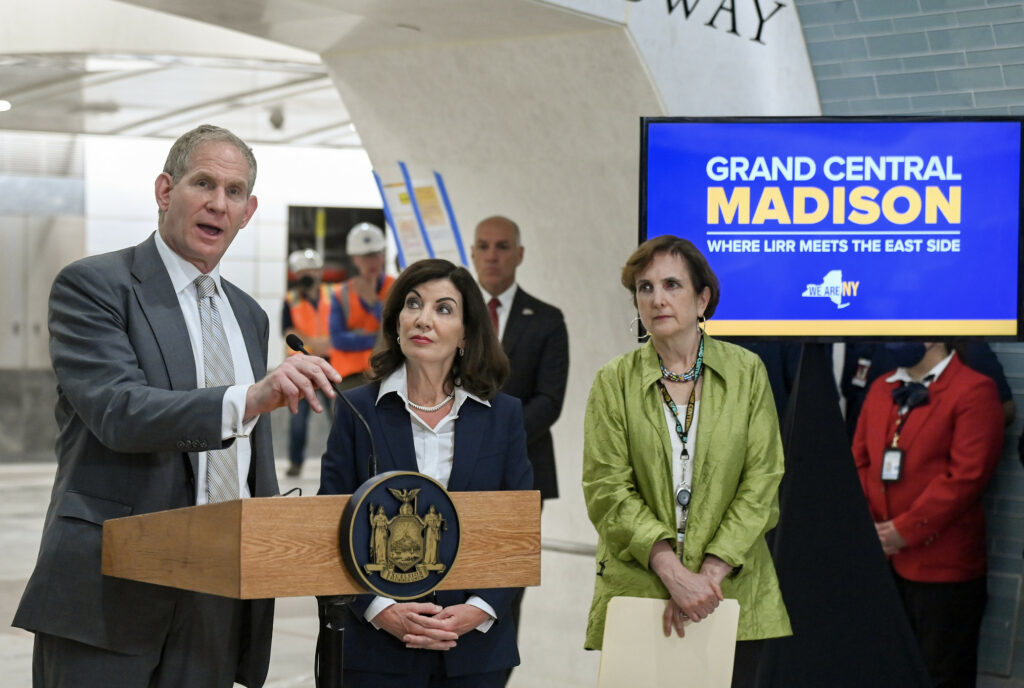 More scheduling information is expected this week as the new Long Island Rail Road terminal that will be known as Grand Central Madison draws closer to completion, the Metropolitan Transportation Authority said Tuesday.

The name of the 700,000-square foot terminal, which will occupy space below Grand Central and Madison Avenue in Manhattan, was announced Tuesday. The terminal is expected to open this year, and the MTA plans to release draft timetables this week.

The new terminal, and the addition of the Main Line Third Track, is expected to reduce, though not eliminate LIRR traffic to Penn Station, reducing congestion the MTA said, which would allow the LIRR to increase service systemwide by 40 percent on morning peak service, and  increase reverse peak service.

Gov. Kathy Hochul said the new terminal represents the  largest  in the 112 years since the original Pennsylvania Station and its East River Tunnels opened on Sept. 8, 1910.

The MTA said new terminal will have eight tracks and four platforms on two new levels below the existing lower level of Grand Central Terminal, all designed with passive wayfinding to help orient returning users through subtle color shifts by location.  All tracks and platforms are fully separated from Metro-North Railroad, so that service interrruptions on one line wouldn’t affect the other.

“This is an exciting, historic moment for New York State, Long Island, and the MTA as New Yorkers are just months away from being able to seamlessly ride a train between East Midtown and Long Island,” Hochul said. “Grand Central Madison – the largest new passenger rail terminal built since the 1950’s – will be a game-changer for Long Island, allowing the LIRR to dramatically expand service and operate more reliably for commuters, and reducing overcrowding at Penn Station. We will continue to build back stronger from the pandemic and deliver state-of-the-art, 21st century infrastructure worthy of New Yorkers.”

The LIRR will hold a series of virtual public information sessions next month to gather public input on the timetables.

“Our service planners used the opportunity of the opening of service to Grand Central Madison to take a completely fresh look at the schedules, something that has not been done in more than 30 years,” said LIRR Interim President Catherine Rinaldi. “We want the public to be able to see these draft timetables months before service starts, and plan to share final timetables this fall.”

The number of morning rush hour trains would increase slightly more than 40 percent and the number of afternoon/evening rush hour trains would increase by nearly 65 percent.  The MTA said the new terminal and the Main Line expansion would “dramatically improve” reverse peak service to Ronkonkoma, Huntington and all intermediate stops, as well as from Brooklyn, where service to Jamaica is increasing.

The timetables will improve the spacing of trains on many branches, reducing large gaps in service. During the off-peak hours of middays, evenings, and weekends, Huntington and Ronkonkoma will both have service to Manhattan every 30 minutes, with weekend Ronkonkoma Branch service doubling.

A familiar part of commuting to Penn Station for many Huntington passengers will undergo revision as the “change at Jamaica” option will disappear as a function of a particular train. Trains will no longer have scheduled connections at Jamaica. Instead, the MTA said, Manhattan-bound passengers at rush hour on most branches, and all day on the busiest branches, “will find plenty of options to take them to the terminal of their choosing without the need to change trains. For those who do need to transfer, all trains will now make station stops at Jamaica to reduce wait times. The TrainTime app will be updated to provide transfer recommendations.” Service to Brooklyn will also increase..

The LIRR will hold four virtual information sessions about the proposed new timetables at the following dates and times: