Greg Fasolino has skeletons in his closet, along with monsters, werewolves and other creepy collectibles from the 1960s and 1970s. And many of them are on display this month at the Huntington Public Library.

“There was an explosion of new products coming out, and all of a sudden there was an entire subculture based on horror,” he said. “If you were a kid who loved monsters, there were so many things you could explore.”

This is the first time that Fasolino has publicly displayed his collection. A public relations professional, Fasolino normally keeps his collectibles on shelves and in glass cases and boxes in the basement of his Huntington house, where he lives with his wife, Brittany Bowen, who is the art gallery and display cases coordinator at the library.

“We had an opening for October, so I thought this would be a fun exhibit,” Bowen said of her husband’s horror collection, which is being displayed in two glass cases in the library Oct. 1-Nov. 2. “And it turned out to be a good choice: It’s been getting a lot of attention. Older staff members and patrons say they remember when those magazines and toys came out when they were kids, and some of the younger patrons who are into vintage Halloween items are familiar with them.”

Fasolino secured some of the artifacts from horror expos such as the Famous Monsters Conventions of 1974 and 1975 in New York City and the annual Chiller Theatre Expo in New Jersey.

Highlights of his collection include Aurora monster models, a series of classic monsters like Frankenstein and Dracula that came out in the 1960s.

“If you loved monsters and horror, the model kits were the one thing you coveted,” Fasolino said. “In 1969, Aurora reissued the models in glow-in-the-dark, and if you were a horror kid this was the coolest thing. You turned off your lights at night and saw all your monsters glowing.”

Fasolino’s collection also includes Pop-Top Horrors, frightening figurines, such as a werewolf, grim reaper and witch, made of plastic that came out in 1964. “They have interchangeable heads,” Fasolino said. “It was one of the first horror toys I got as a little kid, and I was creeped out by them, but it was fun to switch the heads.” He has a complete set of eight in a sealed container, which he said is rare.

There’s also the Outer Space Men, circa 1968, which were made by Colorforms during an era of fascination with space and aliens.

“They’re creepy bendable action figures, each from a different planet,” he said. For instance, there’s Colossus Rex, who hails from Jupiter and looks like “the Creature from the Black Lagoon on steroids,” according to Fasolino. When they first came out, you could buy one for about a buck. “Now they sell for several hundred dollars,” Fasolino said.

Though Bowen is not a collector like her husband, she shares his love of horror flicks.

“For Halloween, we dress in fun costumes, have a horror-themed dinner and watch a bunch of horror films,” said Fasolino, whose favorites are “The Thing” from 1982 and “It Conquered the World” circa 1956.

As for the library display, Fasolino has been gratified to hear that the exhibit has created a stir.

“It’s nostalgic for people who loved these things as kids and haven’t seen them in years,” he said. “I’m happy that they are enjoying seeing them again.” 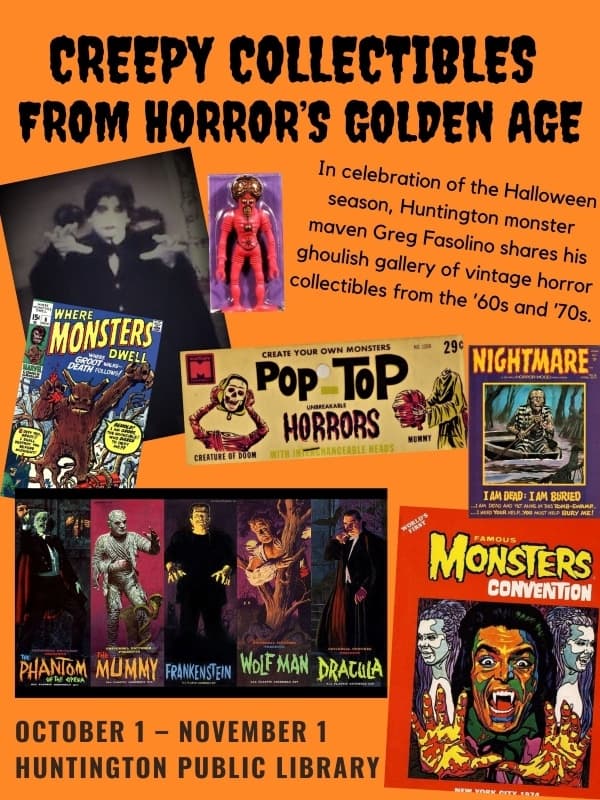