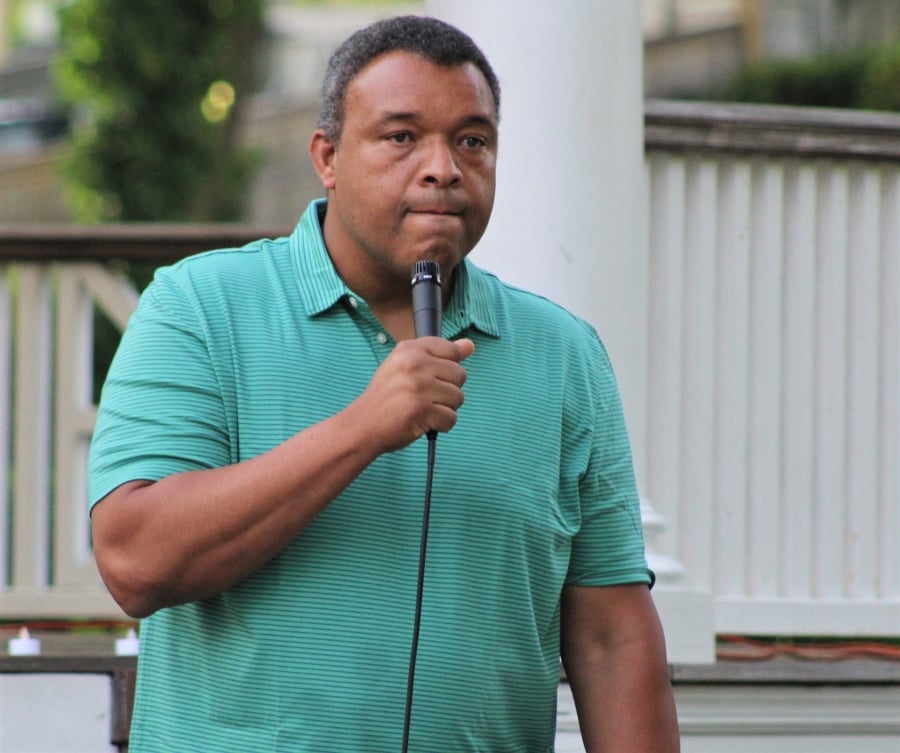 Dr. William R. Spencer is among the most distinguished public officials in Suffolk County history. He is a pediatric surgeon, the first doctor to be a member of the Suffolk County Legislature in its 50 years, and also an ordained minister. First elected to the legislature in 2011, he is especially known for leading the panel in taking action on smoking including getting the legal age for buying cigarettes and other tobacco products in Suffolk to 21.

Dr. Spencer is chief of otolaryngology at Huntington Hospital, a clinical professor at Stony Brook University Hospital and past president of the Suffolk County Medical Society.

He is an African-American. With a prayer he opened a meeting earlier this month of the legislature’s Public Safety Committee, held in the wake of the murder of George Floyd in Minnesota and amid protests through the nation and Suffolk.

And 12 minutes into the meeting Dr. Spencer, of Centerport, shared with his fellow members of the committee some experiences he has had with police as a black man. He began by saying he has the “utmost respect and admiration” for police but “at the end of the day there are still individuals” among police who are highly problematic.

“I can share my personal experience as someone who has always been law-abiding,” said Dr. Spencer. “I can honestly say as a 52-year-old man that I have been pulled over at least 50 times over the course of my life. I’ve been called ‘boy.’ I’ve had guns drawn. I’ve had a gun held to me and it’s from law enforcement.”

“So, when I get pulled over even in Suffolk County until the point when that officer recognizes who I am, I’m terrified. I am terrified. I was with my son. I got pulled over. And, again, the officer was absolutely professional, but still, I’m faced with that.”

If you would like to listen to Dr. Spencer’s words yourself, the video of the meeting is online at https://livestream.com/scnylegislature/events/8960413/videos/207010190

At the session was Stuart Cameron, the highest uniformed officer in the Suffolk County Police Department. Dr. Spencer went on to ask him about “your thoughts about measures that we can take to go further… so whoever has interface with police—black, white, Hispanic, whatever—they are acknowledged…and treated equally.”

“First of all, sir, let me tell you it breaks my heart to hear you relate those encounters,” said Chief Cameron. “I know that you are an honorable person. You are a good human being, and you definitely should not be treated with anything but the utmost respect.” He said “I hope” the incidents didn’t happen in Suffolk but “somewhere else,” and Dr. Spencer said “they did.”

Mr. Cameron continued that “what I always like to say is that the police department is not something in the community, it’s part of the community, it’s our community, and that’s the attitude that every officer should take.” But, he said, “changes take time.” With the department for 35 years, he spoke of how it is “incredibly selective” in who it accepts. He cited advances in training and other areas as part of an agreement with the U.S. Department of Justice’s Civil Rights Division entered into to improve relations with, as the agreement states, “all” people in Suffolk and do “bias-free” policing.

Mr. Cameron took the top Suffolk cop position in 2015 and thereafter began learning Spanish to have better relations with Latinos here. Speaking at a mass last year at St. Anne’s Roman Catholic Church in Brentwood, he asserted “our department truly is here to help people.”

If only that was the position of police throughout the United States.

The protests against racism by police since the murder of Mr. Floyd have been intense—and there are many moves to reform police departments. “How Police Unions Became Such Powerful Opponents to Reform Efforts,” was the headline of a recent article in The New York Times explaining why this has not happened.

Police unions—including in Suffolk—make large campaign contributions to politicians and are highly effective in getting out the vote.

But arrogance has also come from the other direction—from some politicians to police.

I was in Manhattan two decades ago to give a lecture. A squad car with flashing lights was suddenly behind me. I pulled to the curb and got out of my car. My attire included a classic Brooks Brothers blue blazer and my auto had an NYP plate signifying my being a working journalist. Nevertheless, the two officers leaped from their squad car and pointed guns at me. I asked what the problem was. I was told one of my brake lights was out. Later, I saw a group of police nearby, a sergeant among them, and discussed what had transpired and whether the use of guns was necessary.

The sergeant explained: “It’s Giuliani time!” referring to then Mayor Rudy Giuliani. I’ve long wondered what would have happened if I were black.