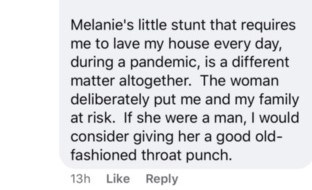 The National Organization for Women and other groups criticized Democratic congressional candidate Michael Weinstock for a comment he made about opponent Melanie D’Arrigo. Both are running in the June 23 primary to unseat US Rep.Thomas Suozzi, D-Huntington.

Weinstock wrote on Facebook, “If she were a man, I’d consider giving her a good old-fashioned throat punch.”

“The use of such brutal language perpetuates a culture of violence against women,” said Patricia Pastor, legislative lead for the National Organization for Women of New York State and president of the Nassau chapter.  “Weinstock’s attacks are particularly reprehensible given that he is a lawyer who claims to have fought for women victimized by sexual predators when he worked as an assistant district attorney.  Such violence against women in any form has no place in a political campaign and is not welcome in our system of government.”

Weinstock said, “I’m sorry I said that. I was very upset about all of Melanie’s lawsuits and I said something childish and boneheaded on Facebook.  Anybody who knows me knows that I’m the last person in the world to get into a fistfight.”

D’Arrigo  has received the endorsement of several national women’s organizations.

Weinstock won an appeals court decision last week dismissing a challenge to his petitions and attempted to knock him off the ballot. Filed by D’Arrigo ally petitioner Josh Sauberman, the suit was dismissed because it wasn’t brought in a timely way.

In upholding an earlier decision, the appeals court wrote, “Supreme Court denied the relief requested by petitioners and granted Weinstock’s motion to dismiss, finding that Sauberman did not properly serve the specifications of objections upon Weinstock and, further, that this proceeding was not timely commenced. Petitioners appeal. We affirm.”

The fight between D’Arrigo and Weinstock has included complaints that she served papers on him on a Saturday, which he said violated laws against serving papers on the Sabbath, and comments from the D’Arrigo campaign that questioned his religious commitment. The New York Post quoted her lawyer as saying that Weinstock is “Not a super Orthodox Jew.”

Weinstock said, “I am hugely relieved that the court dismissed all of these lawsuits.  …Every time she files one of these lawsuits, she not only keeps me from campaigning but she endangers the lives of the Board of Elections staffers who are required to leave their homes and work on her lawsuits.”

“We are excited to endorse Melanie D’Arrigo in the June 23 primary because her progressive platform meets LINC standards for economic, social, racial and environmental justice,” says Lynn Kaufman, one of LINCs founding members. “Long Island needs Democrats who will stand up for the people of this community and stand against corporate political contributions, corruption and inequality in our district and for the United States of America.”

To request an absentee ballot