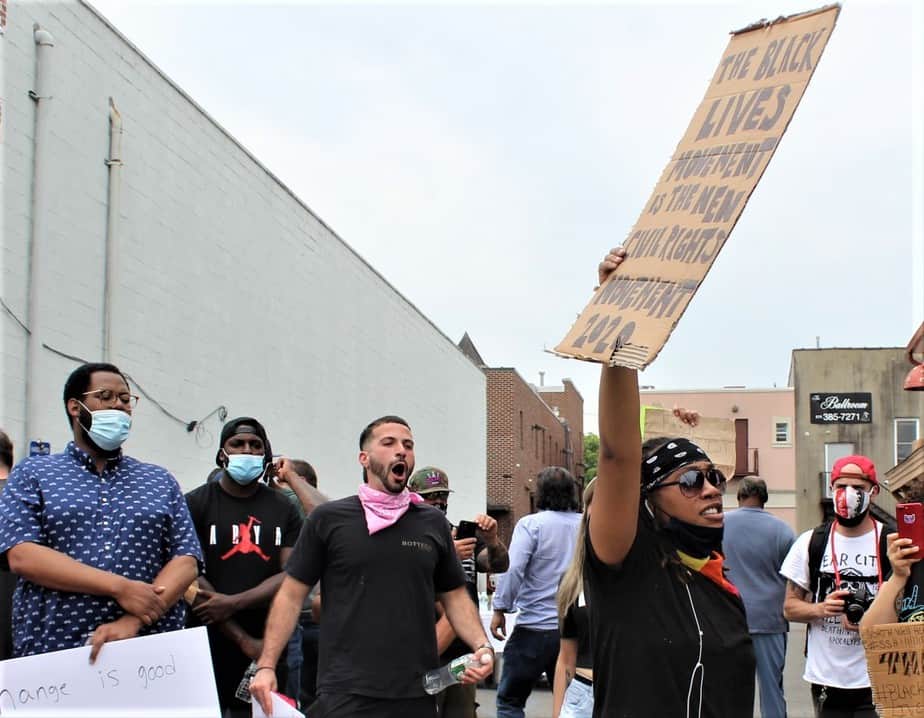 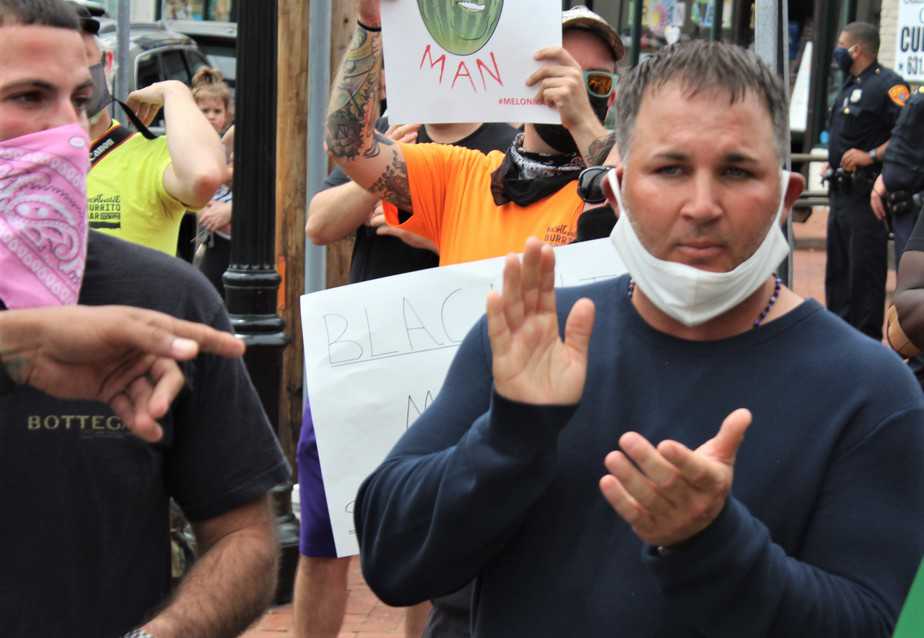 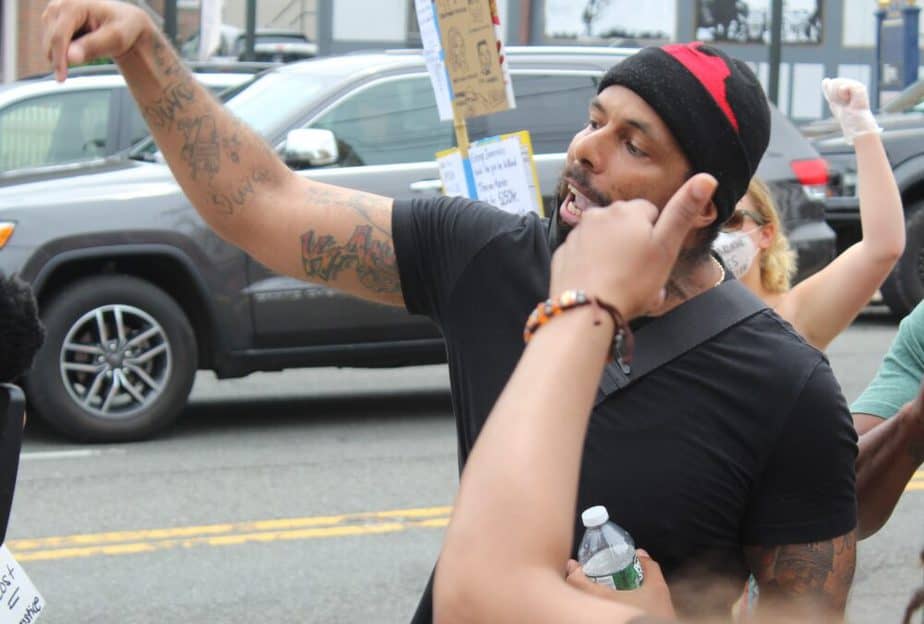 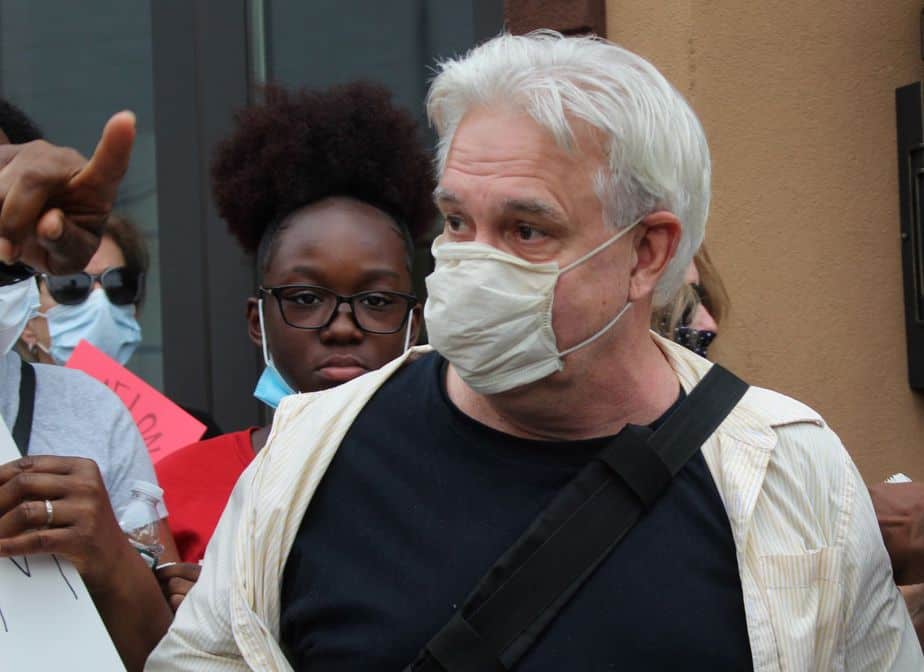 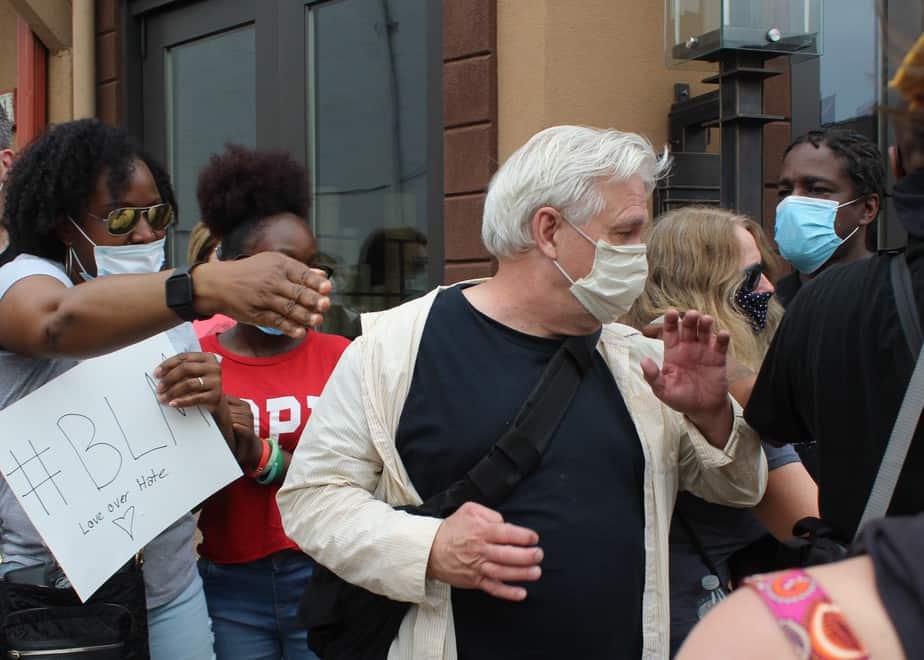 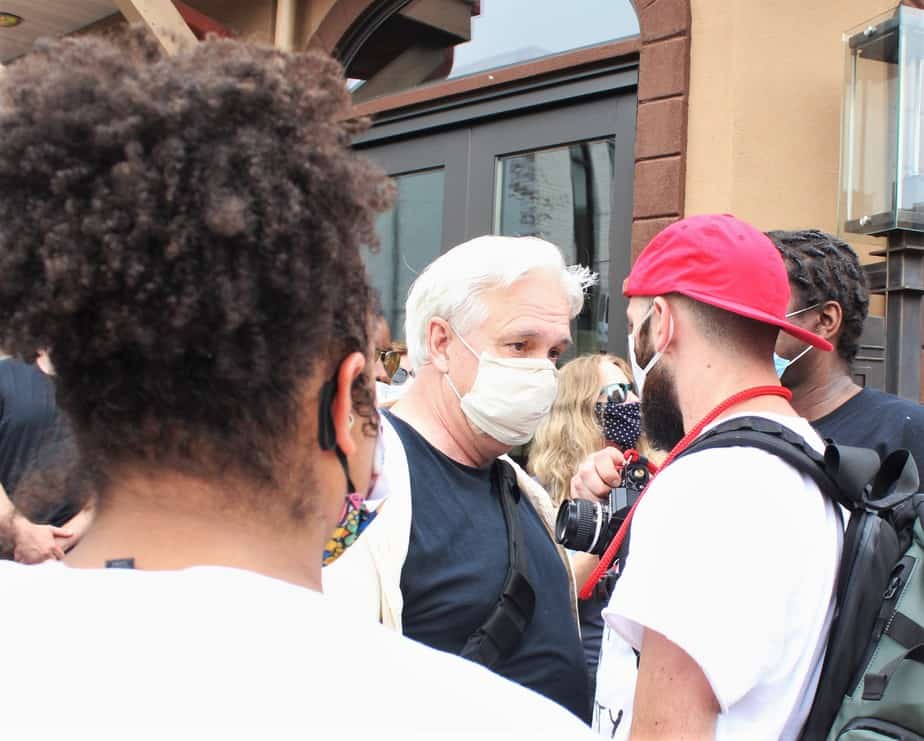 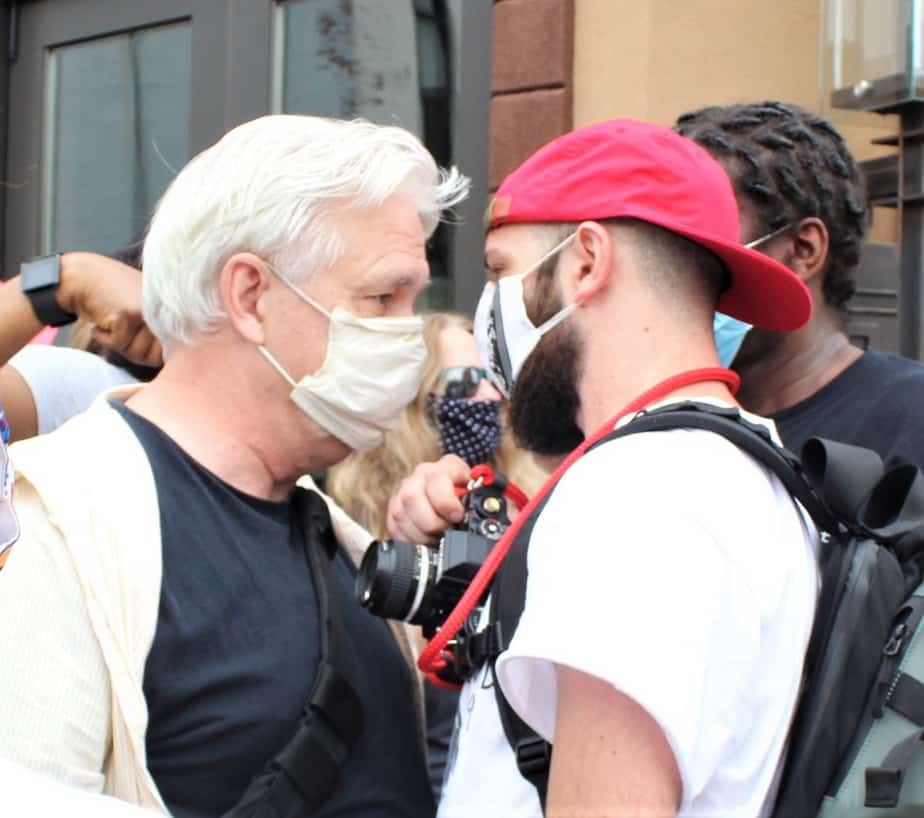 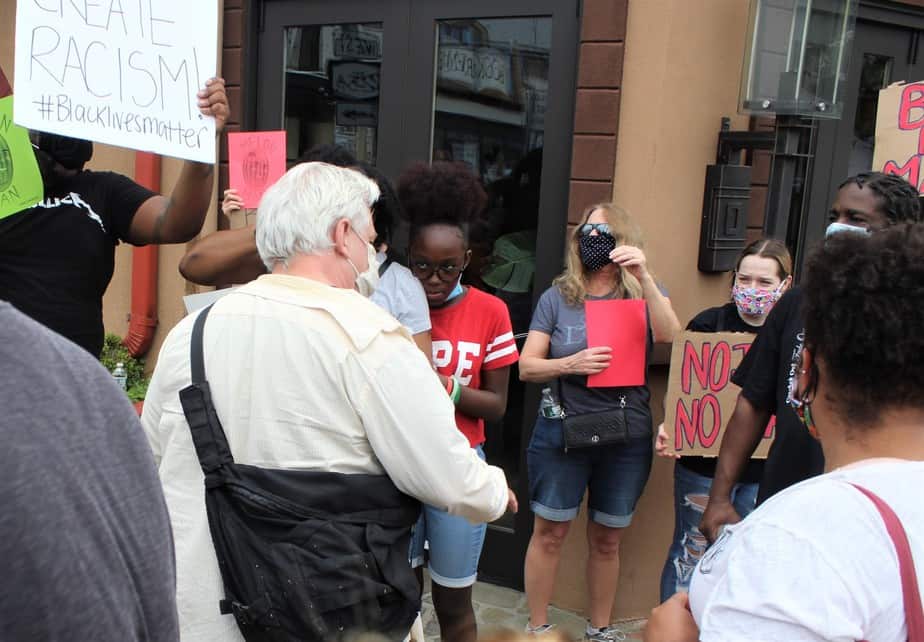 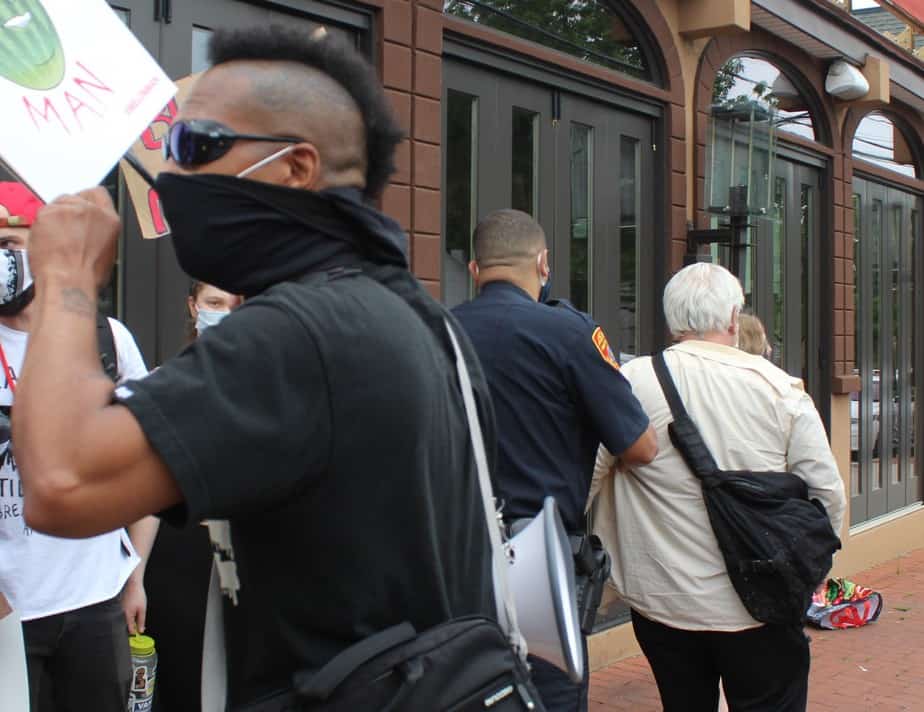 A protest against racist remarks made by a  Huntington restaurant owner expanded Wednesday to a second business.

Protesters gathered in front of Pancho Villa’s to demand justice because the restaurant’s owner, Augie Abbatiello Jr., appeared in a video made by Luigi Petrone, co-owner of Tutto Pazzo restaurant. In the video, Petrone denigrated Black Lives Matters demonstrators who marched into downtown Huntington on Monday, calling them “little animals, savages” and said he was prepared to throw watermelons at them. Abbatiello laughs at a couple of points but is seen trailing behind Petrone but apparently not commenting.

On Wednesday, Abbatiello appeared at the protest and apologized for the remarks and for appearing in the video.  “I want to denounce everything that happened on that video the other day and I apologize to anyone I offended,” he said. He got a hug from a protester, who applauded him but they said he had to do more to convince them of his good intentions. The restaurant provided water and donuts to the protesters.

The demonstration was again peaceful though a tense moment occurred when an older white man pushed a protester out of his way to walk  through the crowd, and was confronted by others until a Suffolk County police officer escorted him away from the booing group.

Protesters, most young enough to be the children or grandchildren of those who demonstrated during the Civil Rights era, pointed to those earlier struggles and shouted, “The last time! The last time!”, meaning the current movement should be the last time they would have to fight against racism and for their rights.

“Enough is enough,” one speaker said. “We’re out here, making history, and guess what? When we get older and have our kids, we’re going to be like, ‘you know what? We were out here fighting for you’,” she said.

Vita Scaturro, who just became chair of the Huntington Township Chamber of Commerce, said this week that the chamber and all businesses condemned Luigi Petrone’s remarks.

Former Huntington Supervisor Frank Petrone, who is not related to the Tutto Pazzo owners, said, “In the 20 some-odd years I spent as supervisor, we collectively worked to make it more diverse and more accepting, especially through the business community. This can’t be tolerated.”

Demonstrations have broken out across the country since  a Minneapolis police officer leaning on the neck of George Floyd as he lay dying on the ground after his arrest.