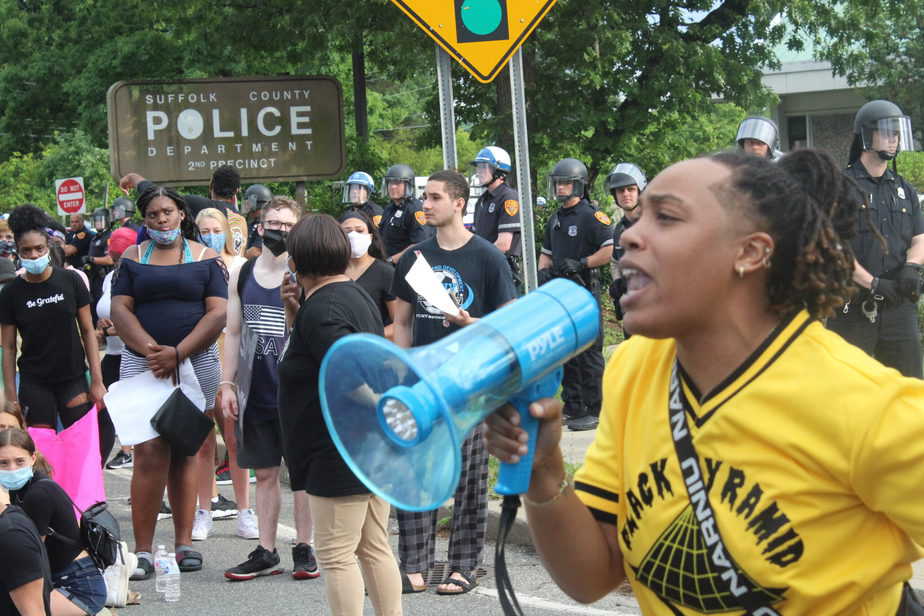 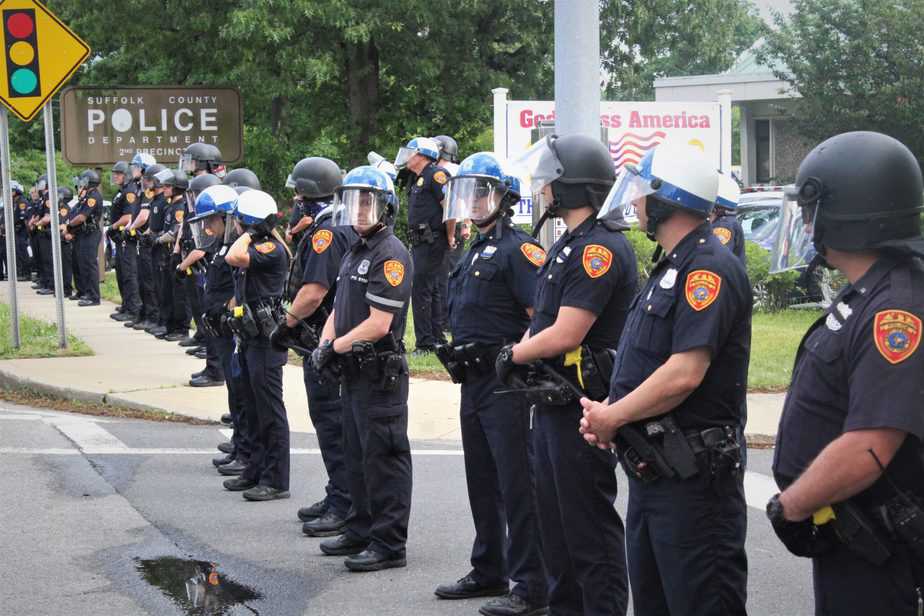 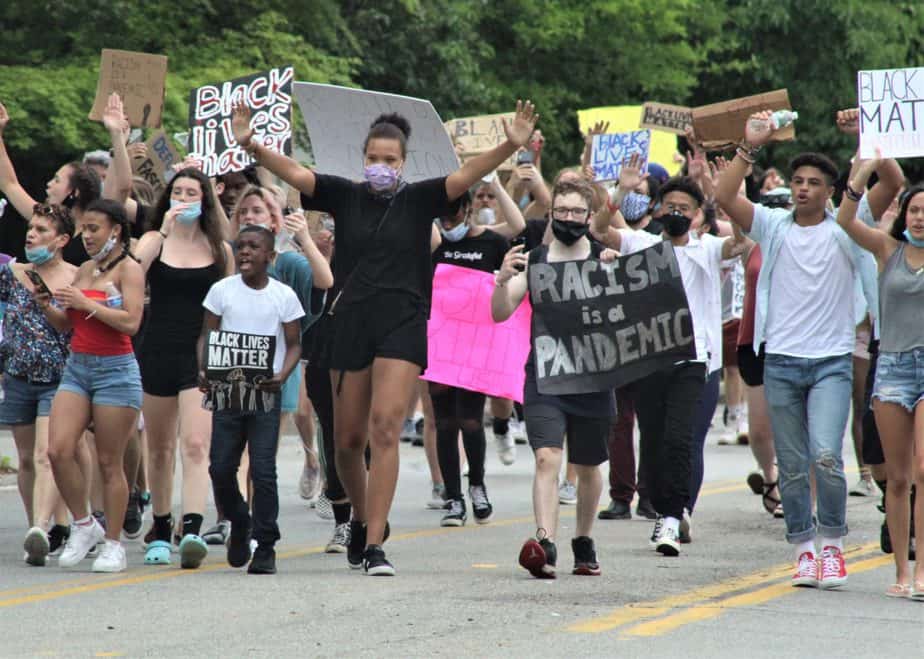 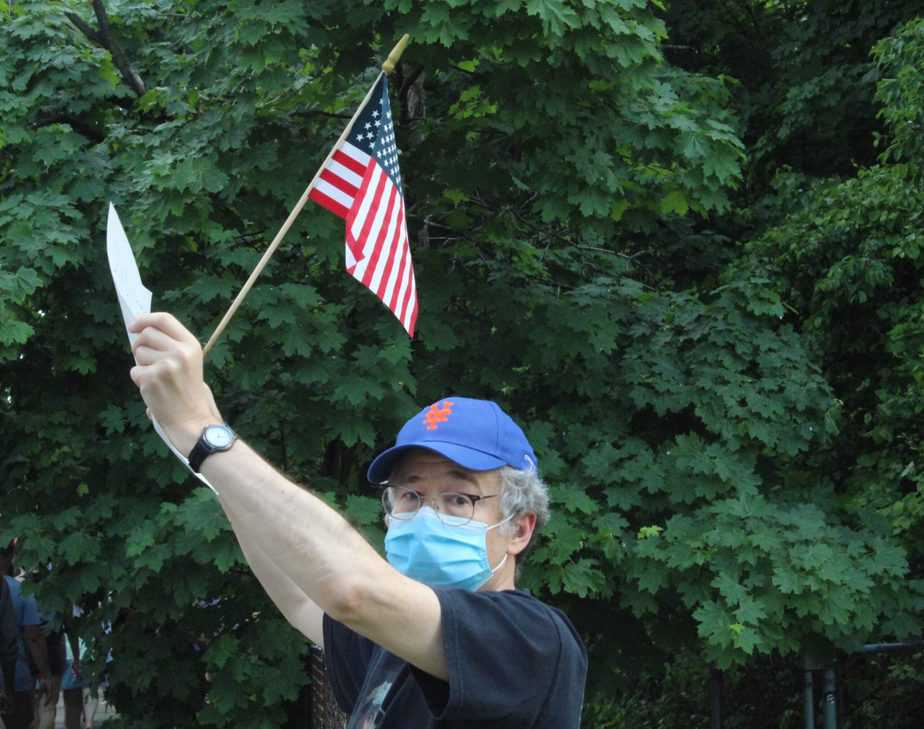 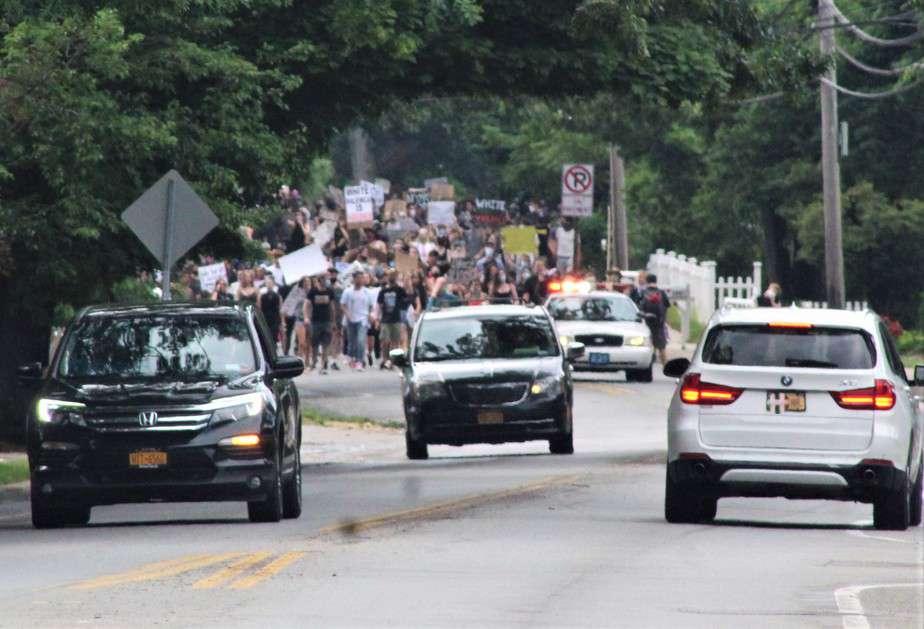 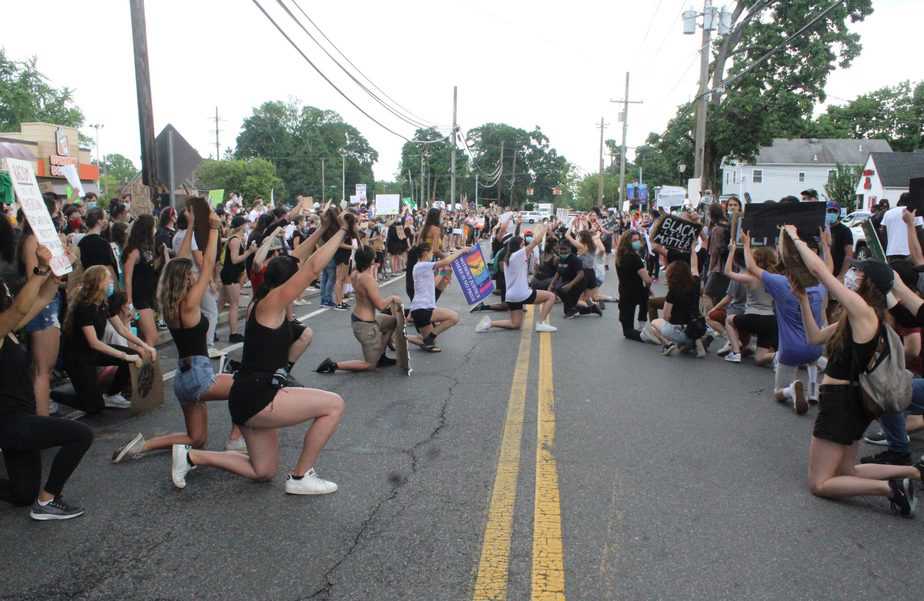 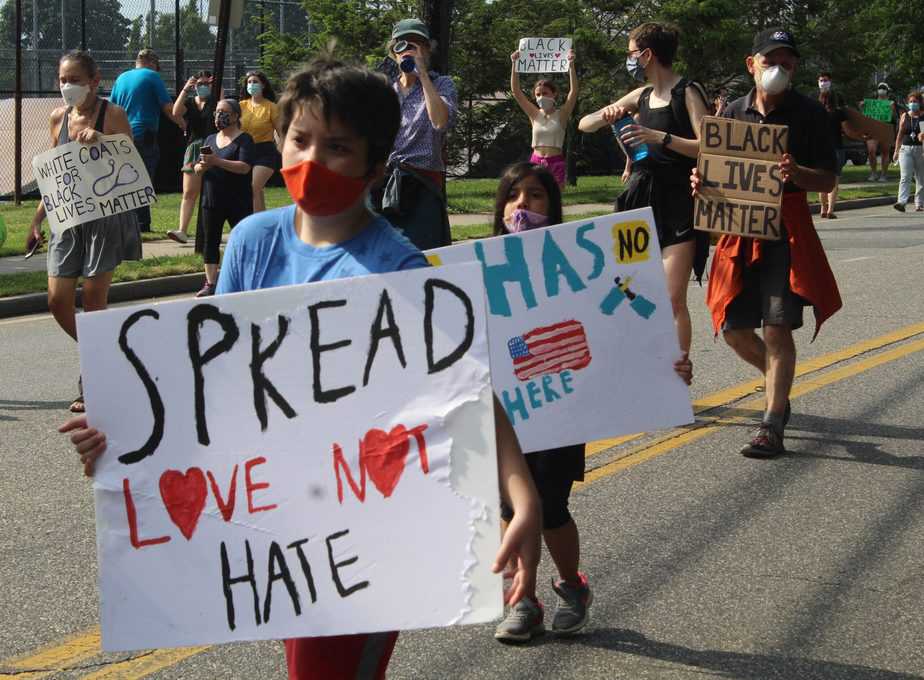 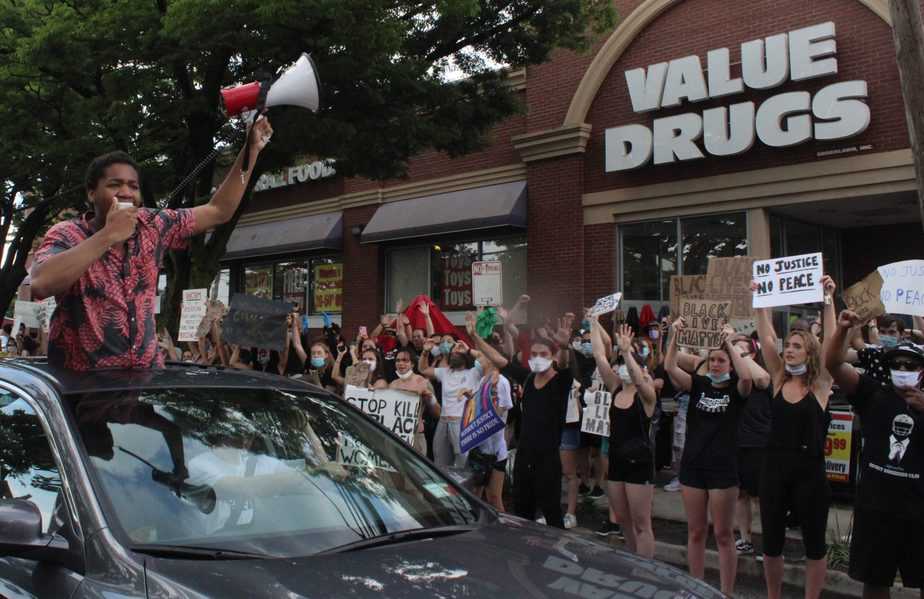 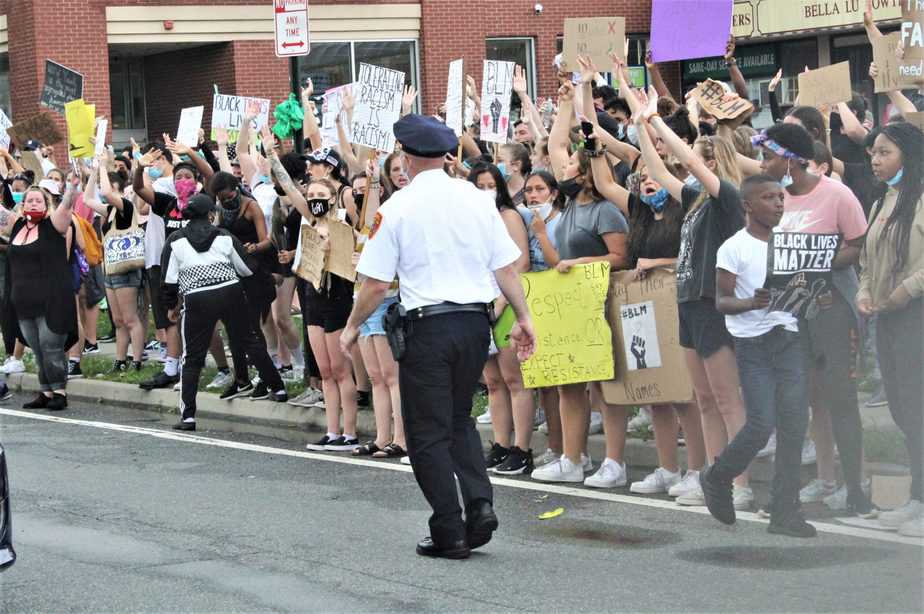 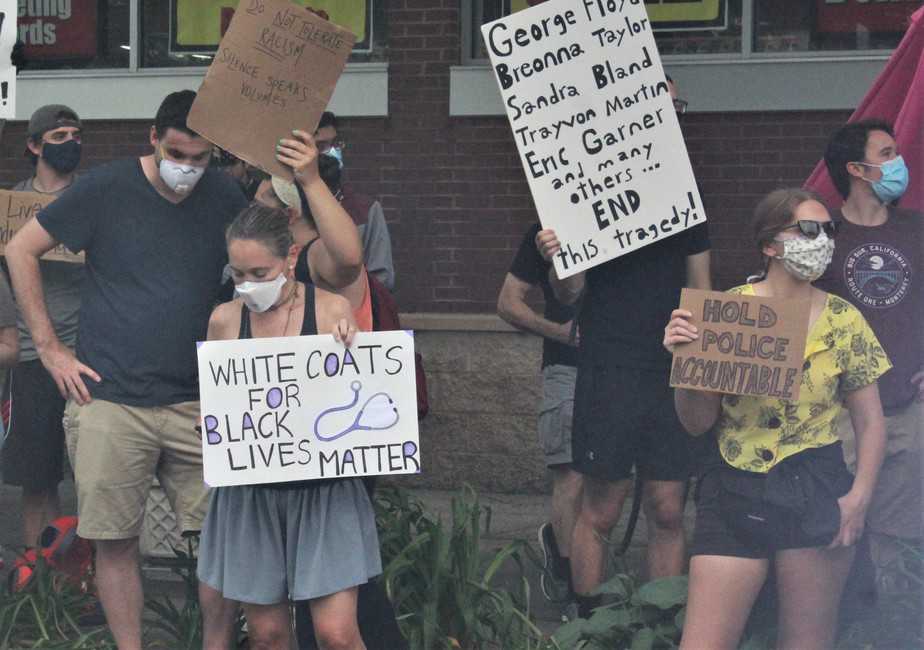 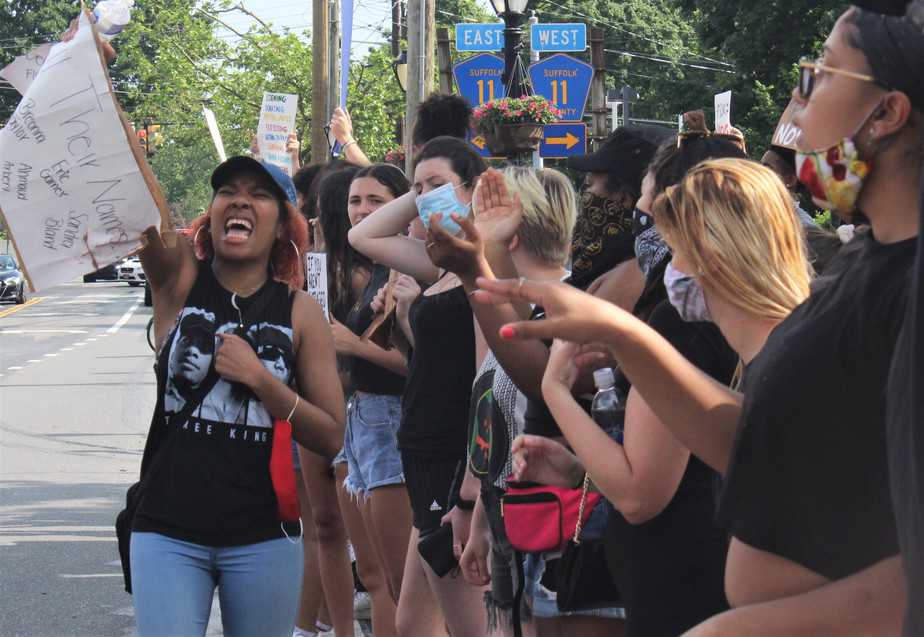 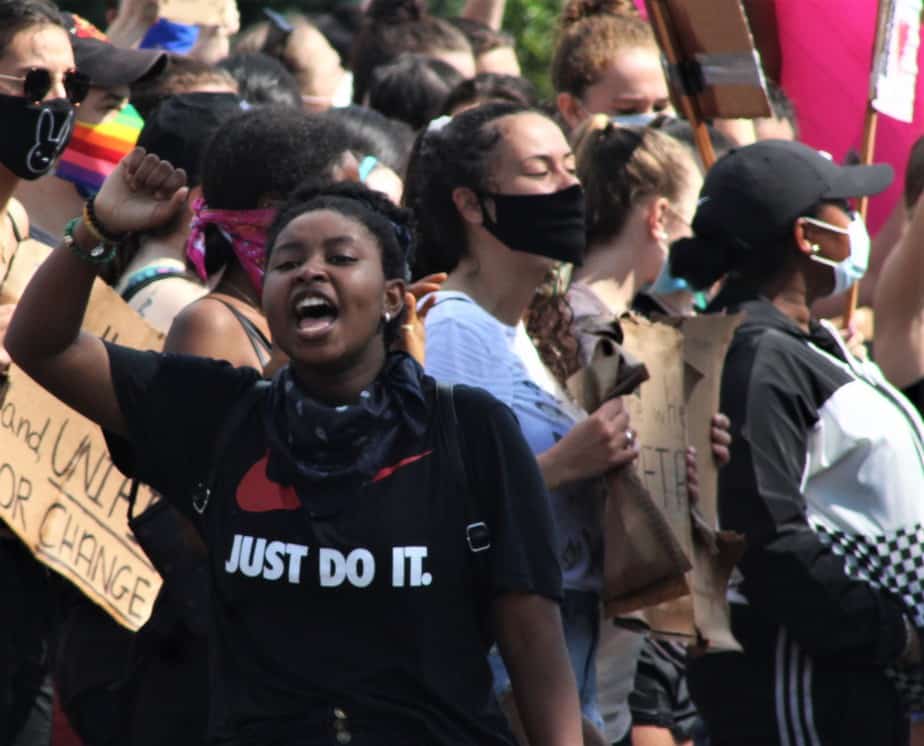 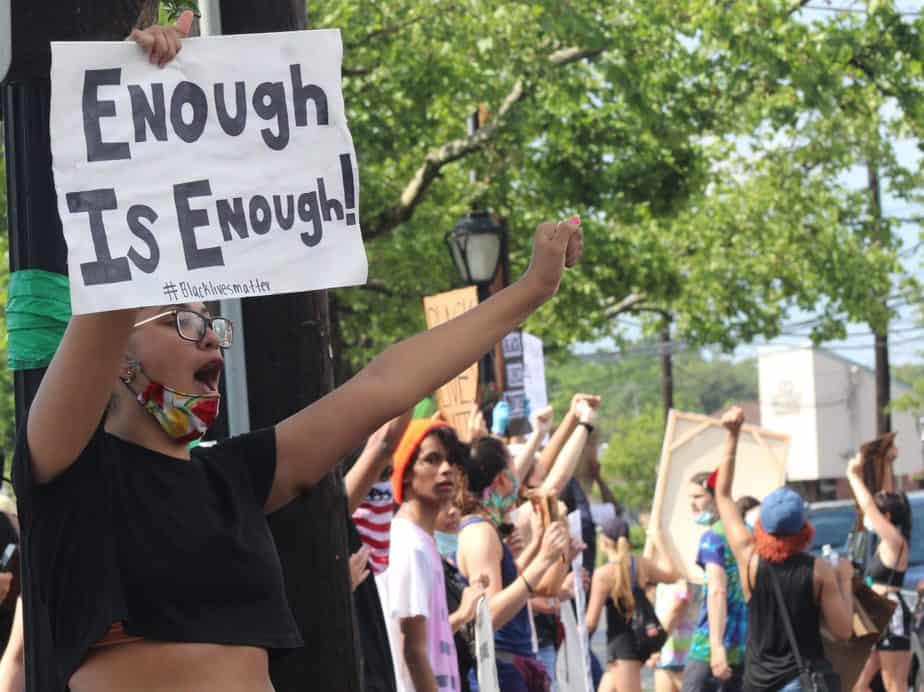 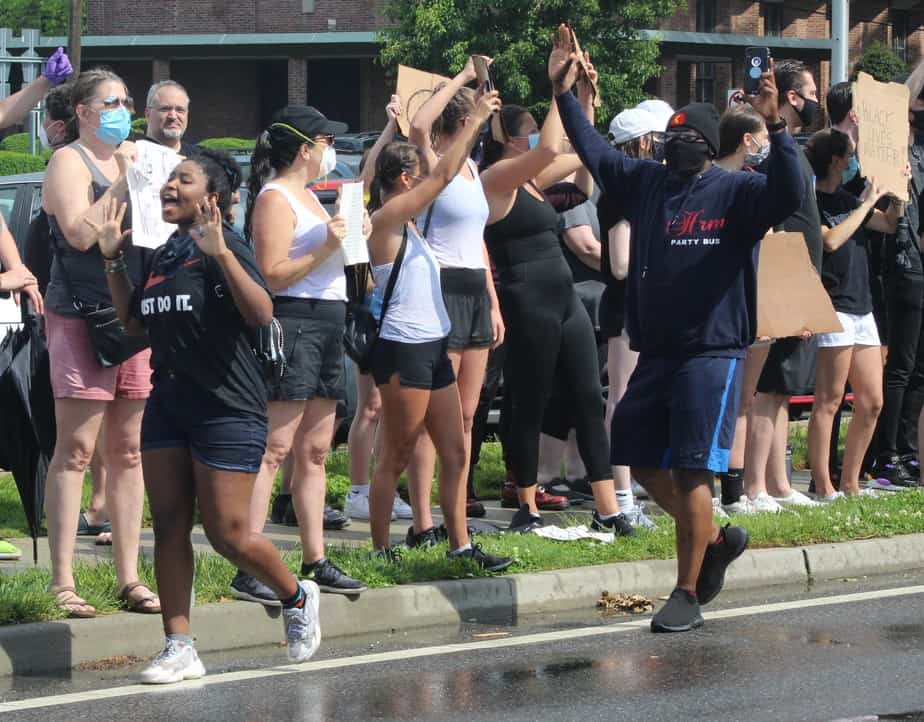 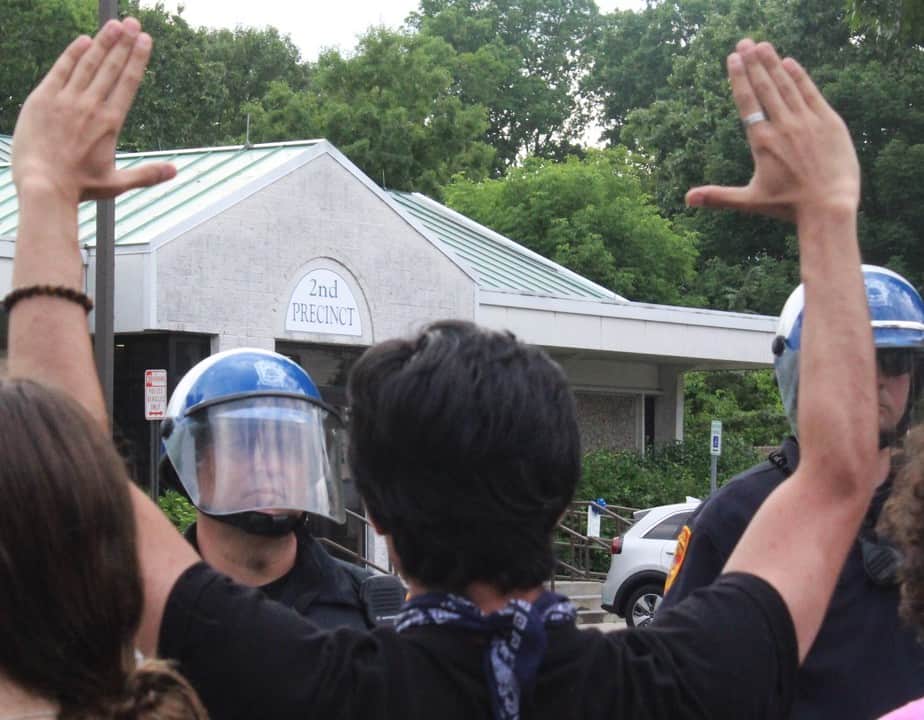 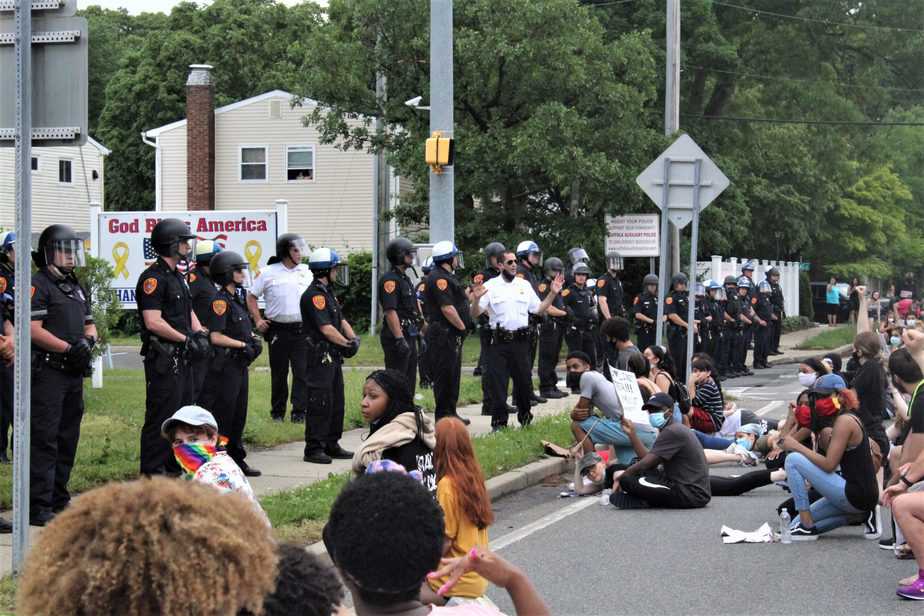 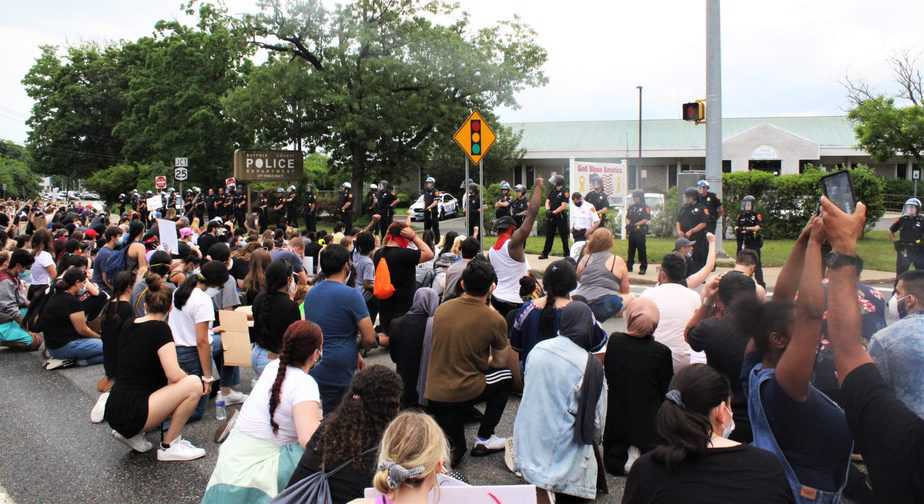 Hundreds of protesters marched Saturday from Greenlawn to the Suffolk County Police Second Precinct where they were greeted by 50 helmeted police  officers lined up up on the sidewalk in front of the building.

Protesters demanded that officers  take a knee with them, a move demonstrators around the country have adopted as a symbol of respect for George Floyd, who died  May 25 after a Minneapolis police officer knelt on his neck for several minutes. When Insp. William Scrima, precinct commander, declined, saying it was against policy for members of the department to appear to take sides at a protest and the job of the police was to keep the peace, many marchers shouted at him that there were no sides to their demands and cause.

When the crowd noticed one police officer carrying a a large nightstick, while the other officers had batons on their belts, they demanded to know why. Scrima went over to him, and the officer set the nightstick down against a sign, leading the crowd to applaud him. And when one speaker cursed police officers, others shouted at him, “Peaceful! Let’s be peaceful.”

But the encounter throughout was tense as emotions ran high, with individuals occasionally shouting in the faces of the officers, who remained silent and unmoving. A few officers had tape across their badge numbers.

Many of the chants and shouts involved other police departments and the deaths of black people who have been arrested or otherwise been confronted by law enforcement. Some demanded reforms of police departments, the elimination of chokeholds, and that officers report the misdeeds of other officers.

After about an hour, the crowd rose and marched back to Greenlawn, where the protest had begun.

In pouring rain broken up by sunshine, hundreds of protesters, many of them students from the Harborfields area, demanded justice, chanted the names of people killed in encounters with police and promoted unity.

The demonstration started as a long line of people stretching alongside the shopping plaza at Pulaski Road and Broadway. As the crowd grew, protesters moved to line both sides of Broadway before eventually spilling out onto the road and kneeling. Not long after, the crowd turned to march down Broadway and headed for the Second Precinct. 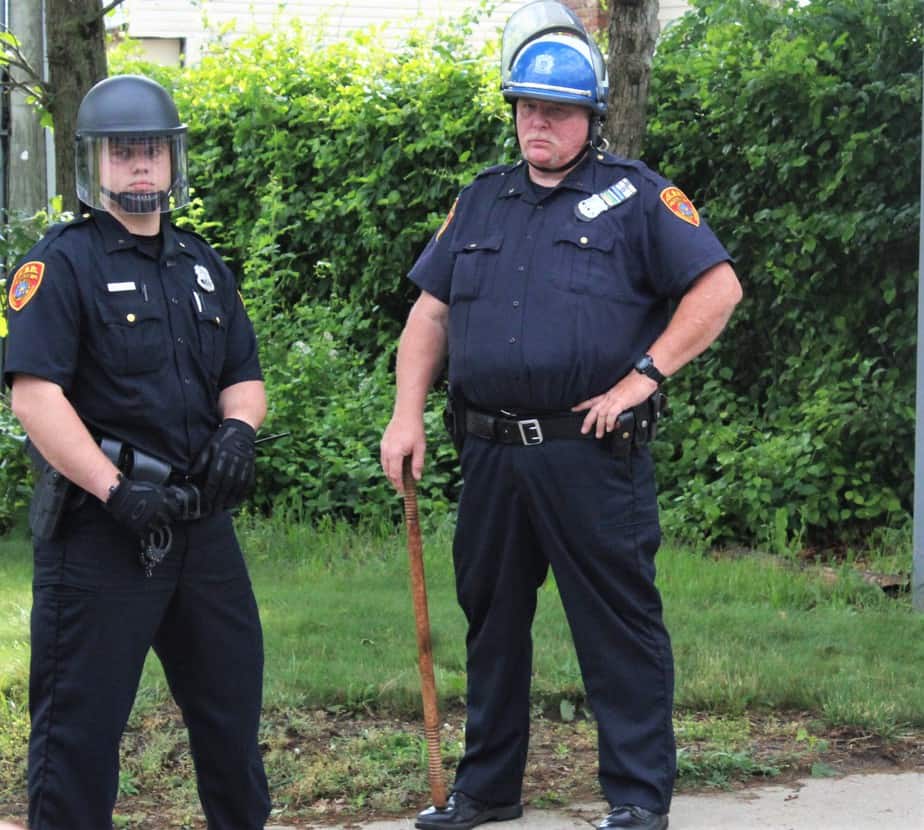 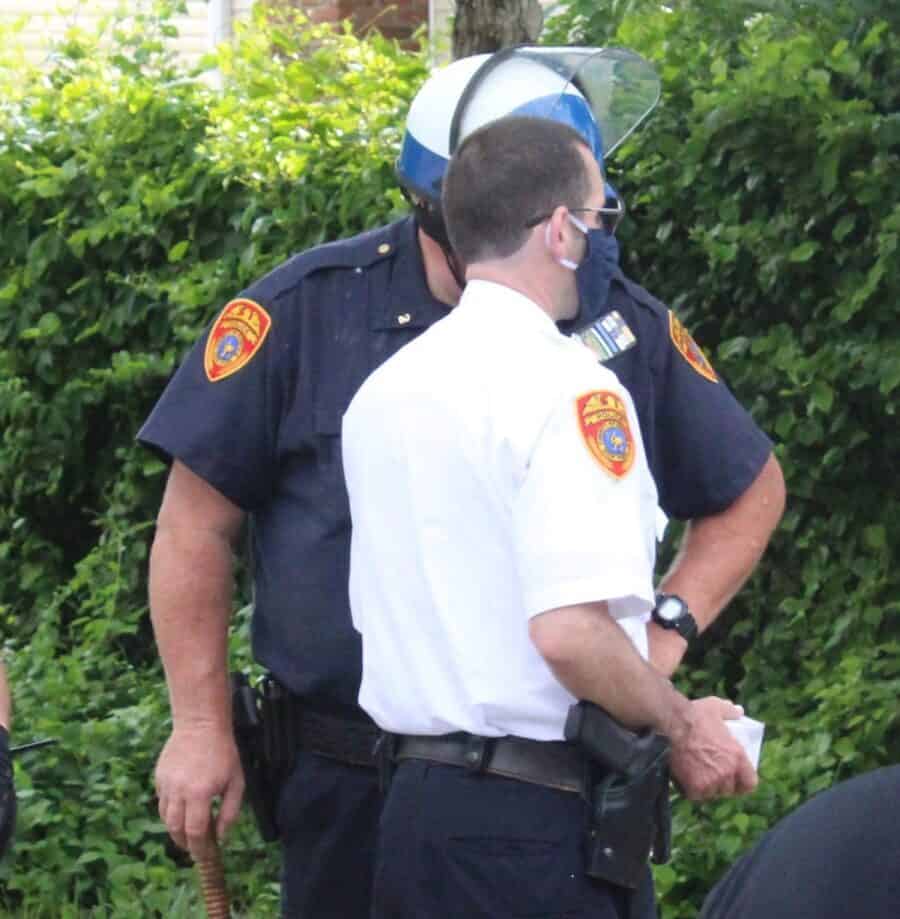 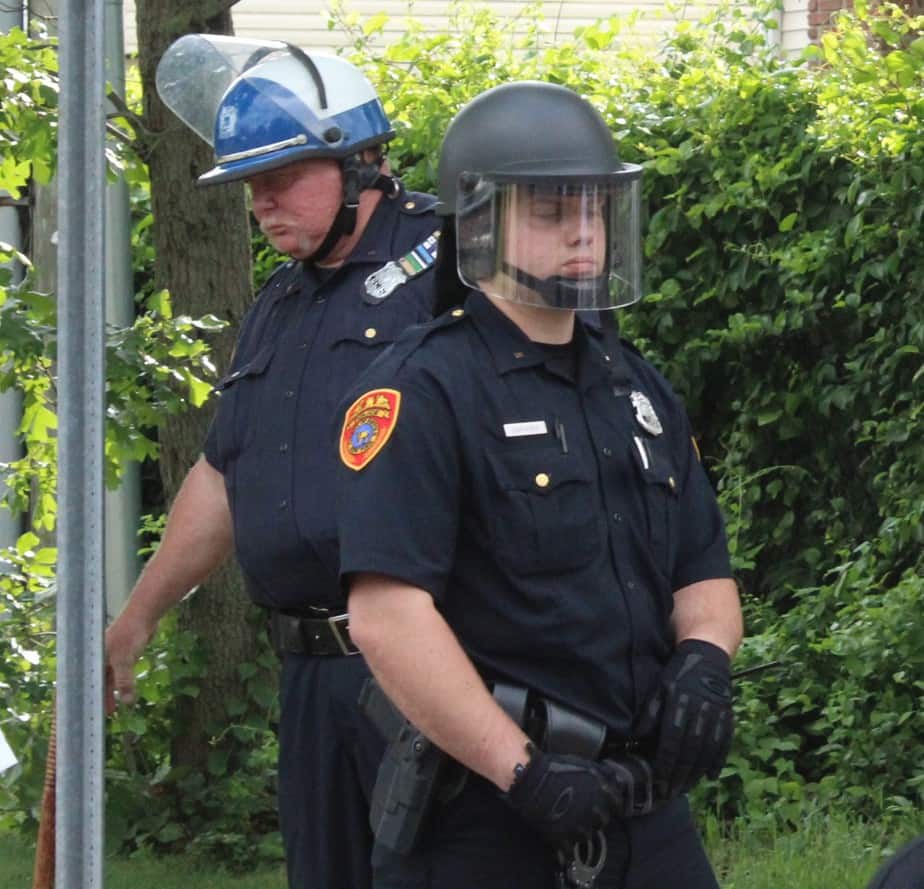 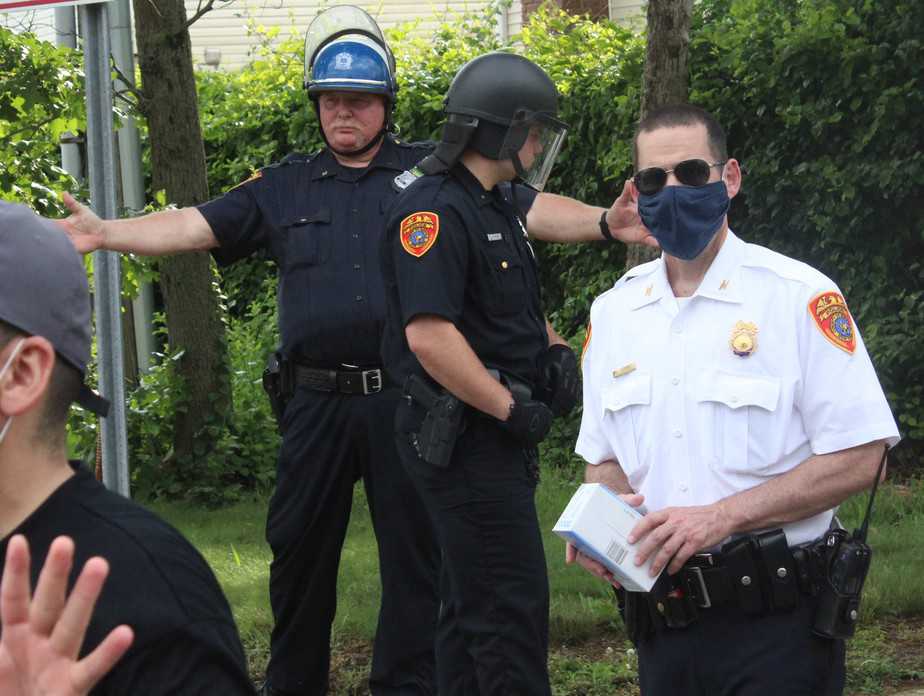