A group promoting the idea that Democrats are hijacking the national election for Democrat Joe Biden will rally Sunday in East Northport.

A “Stop the Steal” flyer was posted to various Facebook pages Thursday afternoon but later disappeared from some pages.

The Washington Post wrote, “Facebook bans ‘STOP THE STEAL’ group Trump allies were using to organize protests against vote counting. The group, which had attracted more than 360,000 members, was among widespread efforts by conservative activists to spark protests challenging the legitimacy of the election.”

“The election is being stolen. The truth is being censored,” the flyer reads. The center has been the starting place of several caravans of Trump supporters that then drove through Northport, East Northport, and to the East End of Long Island. The rally is also called MAGA-Gras VII.

Marissa Espinoza, a spokeswoman for State  Sen. Jim Gaughran, said, “The most basic tenet of our nation is that every vote legally cast be counted. It is a disgrace that anyone would attempt to undermine our democracy by trying to disqualify legally cast absentee ballots, including military ballots cast by our brave service members. This is dangerous rhetoric that goes against the core foundations of our democracy.”

The group will rally at the former Sears shopping center at 4000 Jericho Turnpike, East Northport at 10 a.m Sunday and then head out the Dennison Building, the Suffolk County government headquarters, in Hauppauge. 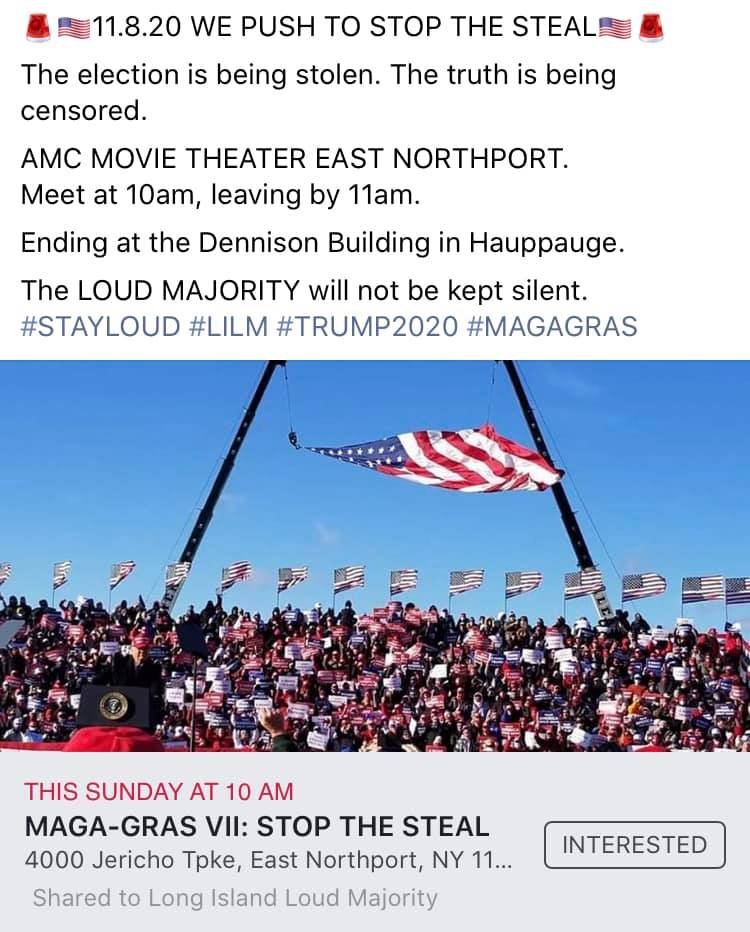