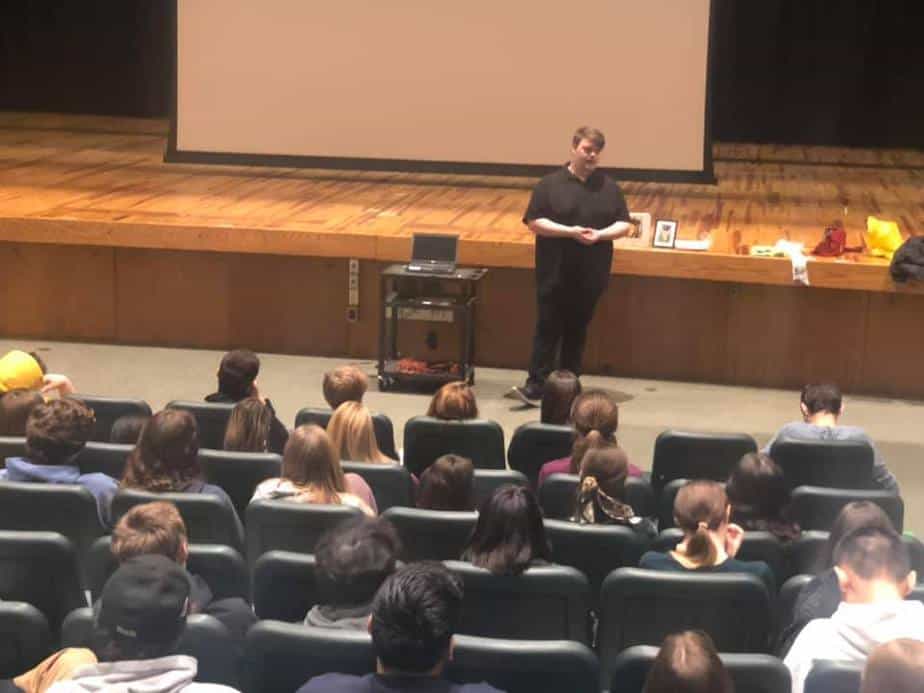 Christian Siems spoke recently with students at Harborfields High School about the need for more organ donors in New York.

A graduate of Harborfields, he described his own experiences with needing a transplant, which he received five years ago in April.

More than 135 students, from 29 schools  participated in the program.

The 9th and 10th graders were asked to tackle the topic of  vaccinations and had to solve for a hypothetical situation to increase vaccination rates.

The Elwood team proposed developing an organization to decrease vaccine hesitancy through public outreach using social media and partnering with the school system, physicians, and prominent leaders to educate the community as well as the development to create genetically modified methods of immunity.

The district will be holding a lottery for Northport-East Northport residents to fill these spots. Each toddler will be paired with a student from Northport’s Family and Consumer Science class, where students will be studying toddler development twice a week.

The goal of the program is to introduce the children to a classroom environment, provide opportunity for them to learn to separate from their caregivers, and interact with their peers. To qualify for this program, toddlers must be 2 years of age on or before Dec. 31, 2020 and families must be residents of the Northport-East Northport School District. There is no cost for the program.

The completed Lottery Application Form is due by April 24. Applications can be found on the district’s website at http://www.northport.k12.ny.us under the high school’s Important Links. For more information, call the office of Assistant Principal Carlos Falcón at 631-262-6664.

A group of Huntington High School juniors and seniors spent 14 hours working on a math problem Saturday at the MathWorks Math Modeling Challenge.

The contest was sponsored by the Society for Industrial and Applied Mathematics, an international organization of more than 14,000 academic and corporate members spread across 85 countries. The society helps build cooperation between mathematics and the worlds of science and technology to solve real-world problems.

“Through participation, students experience what it’s like to work as a team to tackle a real-world problem under time and resource constraints, akin to those faced by professional mathematicians working in industry,” according to organizers.

Team No. 1 consisted of Lily Stein, Lia Shechter, Bryan Wong, Andrew Knowles and Gabriel Medina-Jaudes and was coached by Racz.

Teams were required to submit a 20-page paper, including a math model, to justify their data and assumptions.

East Northport Middle School student Matthew Munson recently qualified to compete in the National Geographic State GeoBee on March 27 at the
New York State Museum in Albany.
The GeoBee includes three levels of competition: school, state and national. For the second year in a row, Matthew surpassed his peers to earn the title of school champion. However, this will be his first year competing in Albany as one of the top 100 ranked students in each state. Students are selected based on their scores on an online qualifying test. State champions are then invited to compete in the national championship in Washington D.C. in May.