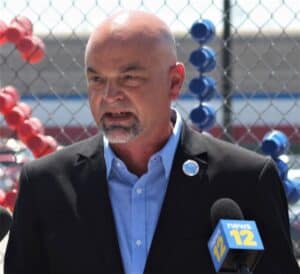 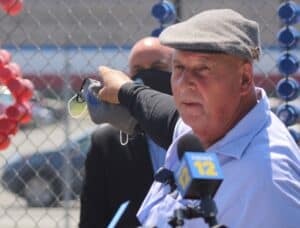 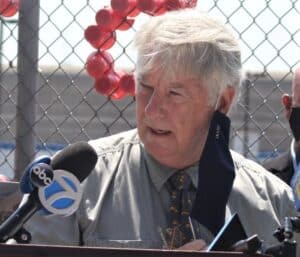 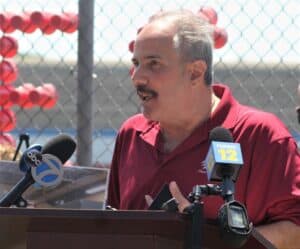 US Rep. Tom Suozzi and several postal union leaders urged an end to the cutback in hours and equipment that many say has already begun to damage mail delivery.

Speaking outside the USPS processing center in Melville, the Democrat whose district includes Huntington said he was “very, very, very concerned” about the impact of the cuts ordered by Postmaster General Louis DeJoy.

Leaders of the National Letter Carriers Local 6000, National Postal Mail Handlers Local 300, and the American Postal Workers Union, said the Melville center had recently decommissioned mail equipment and workers had been ordered to work shorter hours. Suozzi and the union leaders say that the cuts could not only damage balloting for the November election but that was also creating delays for seniors expecting Social Security checks, veterans awaiting prescriptions and businesses and individuals who are trying to send letters or ship packages.

Suozzi, who with the rest of the US House is returning this week to vote on The Delivering for America Act, legislation that he has cosponsored to protect the USPS.

“Undermining and starving the USPS from much-needed funding will have collateral damage that will impact more than mail-in ballots. These cuts and slowdowns will have dire impacts on seniors and veterans who have always been able to depend on the postal service for the timely delivery of life-saving prescription medications, as well as consumers and small businesses who have had to adapt in many ways to the economic fallout of the coronavirus pandemic” Suozzi said.

“Never has the White House played politics with the Postal Service for political gain. Never has a Postmaster General tried to ruin the Postal Service. Mail is being delayed and we are grateful for Congressman Suozzi’s attention with this urgent matter during these unprecedented times in postal history.” said Kevin Tabarus, President, National Mail Handlers Union Local 300.

“Starting employees later at work, reducing overtime hours and eliminating mail sorting machines will slow down delivery and, in some areas, curtail it. This will not be the fault of the postal workers, it will be the fault of our President to take action and that action is to provide funding and to allow this essential service to do its job,” said Walter Barton, President, National Letter Carriers Union Local 6000.

Union leaders, who noted they were classified as essential workers, said that five employees at the Melville center had died of Covid-19.