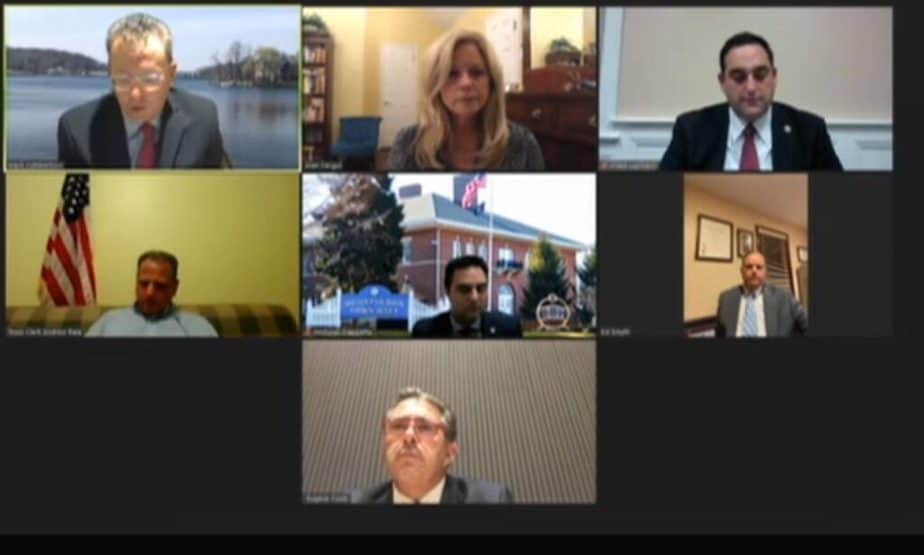 The Huntington Town Board voted Thursday to accept a  settlement with the Long Island Power Authority that will sharply reduce the utility’s taxes on the Northport power plant, a decision that could finally bring the lengthy legal battle to its conclusion. The vote was 4-1, with Councilman Gene Cook voting no.
Some political officials had referred to the vote as the most important decision in the history of Huntington.
LIPA had argued that a fair assessment on the plant was  $198 million, not the $3.4 billion Huntington determined was right.
“This is a settlement that we can be proud of,” said Supervisor Chad A. Lupinacci. “I vote yes to stand with school board, and end a 10-year nightmare.”
Councilman Mark Cuthbertson said, “Suffice it to say the settlement is not perfect,” but, “First, Albany is not coming to the rescue.  Second, we don’t have a strong position in this case. The risk of taking this to verdict is too high. I believe we cannot and will not win this lawsuit.”
Councilman Gene Cook said he intended to keep fighting. ‘The fact of the matter we need to fight for our people. I think it takes real leadership to fight here. We’re elected to fight for our people and so be it.”
“I take my fiduciary duties to my town, to my constitutents very seriously,” Councilwoman Joan Cergol said. “I also want everyone to know how impressed I am at the feedback we’re getting. Everyone has done an incredibly deep dive in this. It’s been an arduous and winding road. We want the same thing for our residents. As history has shown, we’re going to emerge from this. We all have to give something to get something.”
Councilman Ed Smyth said,”I’ve been intentionally silent on this issue because I did not want to influence or discourage anybody from coming to me. I’ve kept an open mind. This matter is too big to leave any stone unturned. And there are no stones unturned. After hearing all of the evidence, I’ve  come to the inescapable conclusioin that the plant is overassessed. Not settling this case is grossly irresponsible. I am acutely aware of the political impact this decision may have, but my fiduciary duty is to the Town and that outweighs all political considerations.”
LIPA said after the vote,”The Huntington Town Council’s approval of the settlement is a fair compromise that will continue low taxes for the Northport community, protect Huntington residents from an $825 million tax refund liability, and begin the transition to a sustainable tax base and clean energy future for all Long Island residents.”
The vote came after a series of Suffolk County officials made clear that the county was in no position to financially help the town, with some taking the opportunity to bash the state of the county’s financial condition. Suffolk County Comptroller John Kennedy, pointing out the costs connected with obtaining bonds, compared the move to “going to a legbreaker.”
Suffolk Legislators Rob Trotta, a Republican, said, “The county’s broke. We had to borrow or steal from a sewer fund to pay bills… The county is in no fiscal position to aid anybody.”
And Legislators Tom Donnelly and Susan Berland, as well as Suffolk County Executive Steve Bellone, all supported the settlement.
While the suit filed by LIPA focused primarily on continuing tax assessments, LIPA had also demanded up to $820 million in tax refunds covering the last several years if they won the case.  Under the settlement, LIPA gives up that retroactive tax claim.
But before the settlement, the town said residential taxpayers would have to pay anywhere from $10,000 to $25,000 in refunds if New York State Supreme Court Justice Elizabeth H. Emerson. ruled in LIPA’s favor. While taxpayers in the Northport school district benefited most from LIPA’s taxes, any refunds, as well as any increases going forward, would be the responsibility of all Huntington taxpayers. That led a group of opponents of settlement to push the idea that the county could float a bond for $820 million, an idea thoroughly challenged by county officials.

After years in court and mediation, LIPA set a deadline for a settlement this summer. In July, the Northport-East Northport School District approved the proposal, which would gradually lower LIPA’s tax payments from $86 million to $46 million over a seven-year ‘glidepath,”  with the school district getting more than $56 million. In return, the district will receive $14.5 million directly from LIPA. And the value of the plant. Shortly after, the town began moving toward the public forums and then scheduling the vote.

Before Thusday night’s vote, Town Attorney Nick Ciappetta again outlined the history of the legal battle at a public forum.

The school district would receive $14.5 million in payments from LIPA, spread over the seven years, starting with $2.5 million in the first year. LIPA would also forgive upward of $800 million in tax refunds it could be due from town taxpayers should it win the case in state Supreme Court.

During the public forum, Councilman Ed Smyth raised questions about whether the town had challenged the methodology of how LIPA reached its assessment, while Ciappetta declined to respond to questions about the town’s own assessment of the plant.

For residents who have argued that the town should not settle but rather take a chance on a court ruling and then appeal an adverse decision, Councilman Ed Smyth said, “New facst are not permissible in an appeall. An appellate court can review matters of law and not new facts.”
Several residents questioned why the board would decide on the settlement rather than allowing the public to vote.
Othe comments during the public forum:
“As much as I’d like to see the case through we cannot gamble our future away. Our kids are counting on you.”

“We all hate LIPA. Hating LIPA is not a strategy.”
“I just don’t get the numbers.”
“I think you’re ready to do the right thing and I’m glad I’m not one of you.”
“This is extortion.”
“Please settle and put an end to this.”
“By bonding this issue we’re making this a problem for our children.”

“The party’s over. We must turn the page and what was is not what is.”

“No need to drag it out further.”


How town allocated LIPA taxes in the past.

Information obtained from the Town of Huntington