A Zoom program highlights the lives of two Huntington women who played key roles in helping women win the right to vote.

The 40-minute program, hosted by Councilwoman Joan Cergol, is called 1920 – 2020: A Centennial of Women’s Suffrage. features a “roundtable” discussion with noted local authors and women’s history experts Natalie Naylor, (professor and author of Women in Long Island’s Past: a History of Eminent Ladies and Everyday Lives)  Antonia Petrash (library director and author of Long Island and the Woman Suffrage Movement) and Deborah Cosher (director of the Northport/East Northport Drug and Alcohol Task Force and vice president of the Huntington chapter of the League of Women Voters).

“If the brave women of the 19th century boldly countered the resistance and would let neither men nor unfair laws stop them from fighting for the rights they so deserved, then we wouldn’t let COVID-19 stop us from showcasing these remarkable women and their estimable achievements,” Cergol said.

The show explores the lives of Ida Bunce Sammis and Rosalie Gardiner Jones, two Huntington women who played a pivotal role in the fight for women’s right to vote, by pioneering peaceful protests directly to lawmakers and other publicity-garnering acts that helped pave the way for the passing of the 19th Amendment.

“We also hope this program draws attention to the importance and sanctity of voting: a right that was hard fought and should never be taken for granted,” added Cergol.

Premiering on the Town’s government access  Channel 18 (Optimum) or Channel 38, the program will run daily at 7:30 am, 1:30 pm and 11:00 pm for the entire week and  can also be viewed on the Town’s website:  https://huntingtonny.granicus.com/MediaPlayer.php?view_id=4&clip_id=2276. 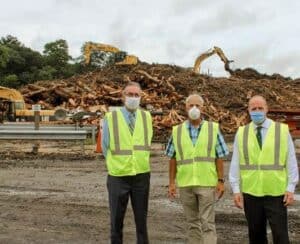 “I would like to thank New York State Senators, Jim Gaughran and Tim Kennedy, for their time today and for having a better understanding of the resources and challenges that face the Department each year,” stated Highway Superintendent Kevin Orelli.

“Today I had the pleasure of joining Superintendent Orelli to lead my colleague, Senator Tim Kennedy, Chair on the Transportation Committee, on a tour of the Huntington Highway Department. An urgent need for increased transportation and infrastructure funding exists and all levels of government must work together to bring our region’s infrastructure into the 21st century,” said Sen. Jim Gaughran.

“From Buffalo to Long Island, it’s imperative that we’re discussing sustainable solutions to meet the growing needs of New York’s essential transportation networks,” said Senator Tim Kennedy, Chair of the Senate Transportation Committee. “I thank Senator Gaughran and Superintendent Orelli for leading me on a tour of the Huntington Highway Department, and for their continued partnership and commitment to strengthening our infrastructure statewide.”