Asaf German  was honored at the July 16 Town Board meeting for raising $461,000 for blood cancer research during the Leukemia and Lymphoma Society’s 10-week “Racing to a Cure” campaign.

“Asaf has consistently shown his commitment to serving those suffering from these illnesses by encouraging others to get involved in the fundraising campaign for the Boy & Girl of the Year, who are local pediatric cancer survivors” Supervisor Chad A. Lupinacci said. “Asaf not only achieved his goal of raising $375,000, but surpassed it, earning a record amount of $461,000.”

“Racing to a Cure” was a ten-week campaign to raise money for blood cancer research; Asaf led the “race” in both fundraising and raising awareness for these cancers. He raised a grand total of $461,000, exceeding the last record of $218,000 by $243,000. This year, Asaf was named the Leukemia and Lymphoma Society’s “Man of the Year” and was praised highly for his extraordinary work, especially within the Leukemia & Lymphoma community.

“Cadet 2nd Lieutenant Gerdvil is an inspiration to other young women who aspire to be a part of the Air Force,” said Supervisor Chad A. Lupinacci. “Such an accomplishment is not easy, but Joanna has proven that she is a committed member of her squadron.”

The Civil Air Patrol is the Civilian Auxiliary of the U.S Air Force by act of Congress and performs emergency services under FEMA. Gerdvil is a member of the Leroy R. Grumman Cadet Squadron, one of the 6 squadrons on Long Island. The Cadet program trains young men and women, ages 12 to 20, in leadership, aerospace, safety, moral leadership, physical fitness and emergency services.

The General Billy Mitchell Award is given to Civil Air Patrol cadets who have  completed the second phase of the cadet program. 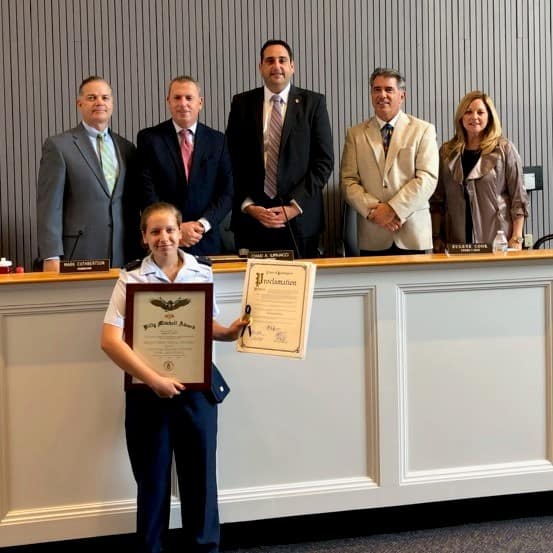