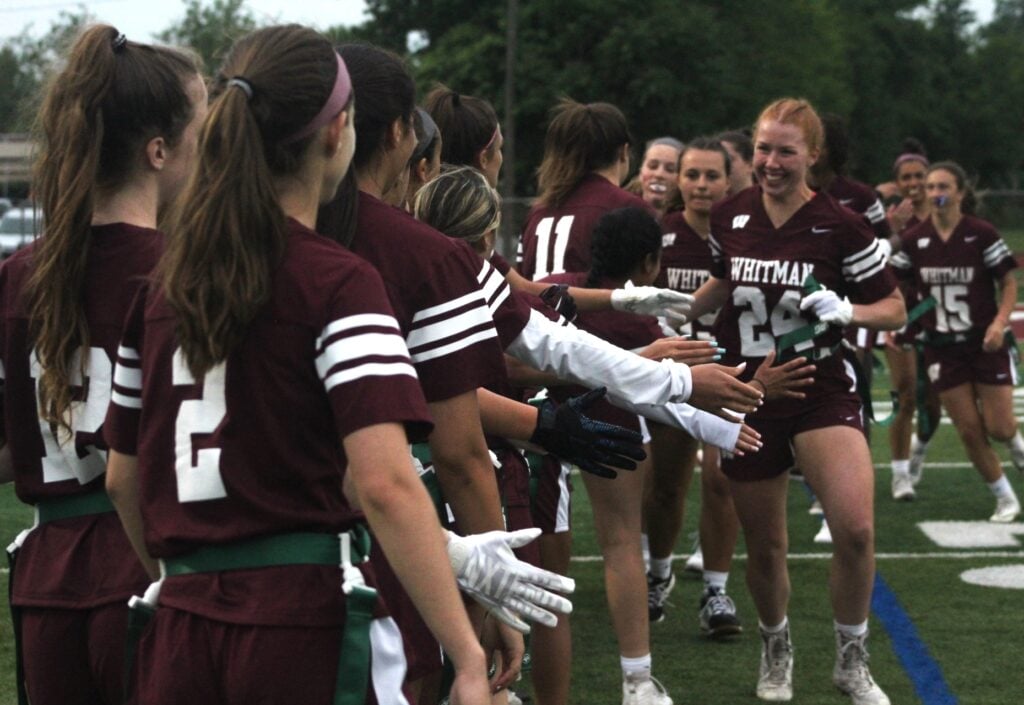 After every Wildcat score, the players on the field rush to the sideline for joyous high fives with teammates.

When the champion Walt Whitman flag football team takes the field, two things are immediately apparent–their athleticism, and their camaraderie.

Their talents have propelled the undefeated squad into the first-ever Long Island flag football championship against Nassau’s Bellmore-Merrick Saturday at the Jets practice field in New Jersey. They beat East Sachem 47-6 Wednesday to win the Suffolk County title.

The Wildcats field numerous athletes who already play a variety sports, including two All-Americans, Gianna Paul (soccer and track), who could be seen recently charging down the sideline to score, and Lizzie Schreiber (track). The team is led by senior quarterback Kate Hoffman, who mixes her handoffs and throws to a variety of receivers, including her sophomore sister, Iris.

Many on the roster rush to practice, Athletic Director David Barth said, after they finish practice with another spring sport team.

“They run from one practice right to another,” Barth said, meaning they could be on the field on a Saturday evening as the brand-new team squeezes into the athletic schedule. About half the team plays a spring sport; another five or so have never played a sport for Whitman until now. He said the team members are committed, coming to practices and watching team film even if they’re not expecting to play.

To Barth, the addition of flag football means the school can provide another opportunity. “There’s definitely room for more girls sports in the spring,” he said. “The interest was very high.”  At the first meeting of the prospective team, Barth said, 21 students turned up. Then 50 showed up for the first practice. “We kept everyone on the team,” who continued, Barth said, with 25 dressing for games, and about 35 remaining on the roster.

“The girls have fully embraced this,” Barth said. “There’s a sense of pride within the schol because it’s grown into something bigger than that we expected.”

Flag football as a school sport in Suffolk County got its start with the backing of the National Football League, which operates NFL Flag, a youth league with teams across the country. The New York Jets provided Whitman with a $5,000 grant, belts and footballs. The Giants are supporting flag football in Westchester, while the Buffalo Bills are helping teams in upstate New York.

Other Suffolk teams playing this year are: Ward Melville, Longwood, Center Moriches, Amityville, North Babylon, Sachem North and Sachem East. While the athletes will not yet earn varsity letters, Barth said, Section XI, which considers the sport a pilot program at this point, is setting guidelines for Suffolk teams.

“We’re definitely onto something with this,” Barth said. “This wouldn’t have happened without the support of Superintendent Vito D’Elia, (school board president) Nick Ciappetta and others. Their support isn’t just words.”

The Whitman team is coached by head coach Ralph Milazzo, who is an assistant for the tackle football team, with Danielle Rodrigues and Robin Rosa, head coach of the tackle team, providing assistance.

For fans, flag football brings its own rules. When a first and 20 is announced, it isn’t a bug, it’s a feature, as teams compete to cross the field in 20-yard increments. The distances for extra-point attempts can be set by the offensive team. Fans won’t hear the same pop and crunch of tackle football but instead, the voices of players as they move to stop runners or receivers by pulling one or more flags off their belts.