It quoted Emerson Dobbs III, principal with 263-265 Main Corner LLC, which owns the building,  who said the company took the tenant to court over a failure to pay rent.

A Third District Court document indicated that the bookstore owed  $420,159.75 as a  judgment and agreed to accept an eviction order.

After a fan of the store set up a GoFundMe campaign to try to keep the bookstore open, owner Richard Klein posted, “As many of you have heard, it is likely that soon Book Revue will have to close its doors after 44 years in business. The outpouring of community support has been overwhelming. We want to thank all of you who have expressed your feelings about the store and its importance to the community. It has come to our attention that some people are trying to raise money on our behalf. While we appreciate this effort, we are not looking to raise funds at this time. As the situation evolves over the next few weeks, we will keep you all apprised of developments.”

nown for a long list of celebrity authors since it opened its doors in 1977, the independent book store has attracted customers from all areas of Long Island and beyond. 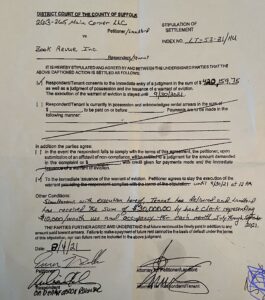 One Reply to “Update: Book Revue Facing Eviction in September”