Updated: 10:06 a.m. Hurricane Henri was downgraded to a tropical storm Sunday morning, with winds of 39 to 57 mph expected for the Huntington area.

A storm surge warning remains in effect for the shoreline.

PSEG-LI reported a handful of power failures in Huntington. The storm began turning east over night, hitting Montauk and the Hamptons Sunday morning. A flood watch remains in effect for the area until Monday, with a total of new rainfall between 2 and 3 inches possible.

Updated: 5:04 p.m. Henri was upgraded to a hurricane Saturday morning and is expected to hit Long Island Sunday, the National Weather Service said.

Northwest Suffolk is under a hurricane and a storm surge warning, with the effects of Henri expected to hit hardest on the East End. Heavy rainfall could cause flash flooding, and a flood watch is in effect until Monday morning. Check for storm surge information. Report public safety or traffic safety issues 24/7 to 631-351-3234 or online at huntingtonny.gov/at-your-service

The storm is expected to arrive about 5 a.m. Sunday and continue throughout the day.

In Huntington, drivers rushed to gas stations to fill up their vehicle tanks and gas cans. One woman awaiting service at a station on East Jericho Turnpike said she had tried to buy gas at four other stations. Another woman said she was told at a station in Commack that only premium gas was available and said the station shut down right after her purchase.

PSEG-LI continued to issue warnings about possible outages because of the heavy rain and high winds that could reach 50 to 60 mph in western areas of the storm. “Given the potential intensity of the storm, the damage may be severe and some outages may last up to seven to 10 days; however, if the forecast continues to strengthen and the storm moves farther west, restoration could take up to 14 days,” said Michael Sullivan, senior director of transmission and distribution at PSEG Long Island. “We are prepared for hurricane force winds and are informing customers to help set expectations about the storm’s potential so that they can also prepare.”

Supervisor Chad A. Lupinacci said Saturday that town facilities such as  the Dix Hills Pool, the Sgt. Paul Tuozzolo Memorial Spray Park, skate parks, and the Senior Beach House will all be closed Sunday. Residents are asked to report public safety or traffic safety issues 24/7 to 631-351-3234 or online at huntingtonny.gov/at-your-service

To report downed trees, flooding or other road problems, call the town Highway Department at 631-499 0444, send an email to [email protected] or go online and fill out a form at huntingtonny.gov/highway 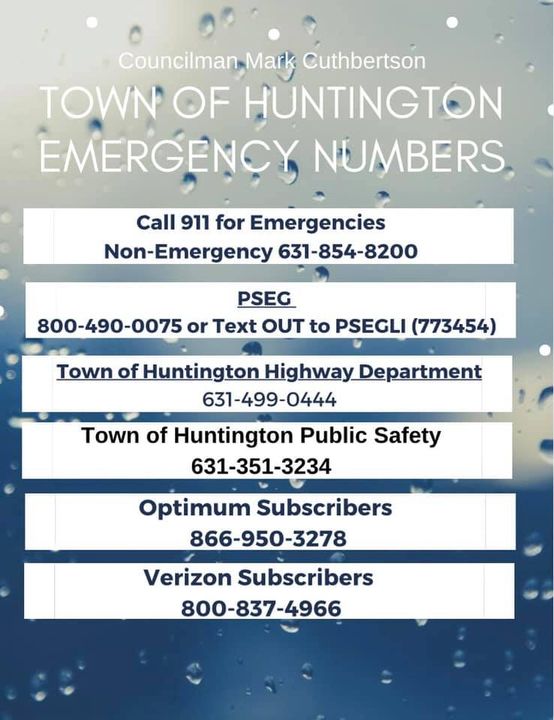