Update: Newsday reported that police were able to get through the damaged door and that the Trump flag had been removed.

In a statement posted to its Facebook page, the society said, “Please be advised that a person or persons broke into the Huntington Lighthouse broke into the lighthouse and accessed the cupola and have flown a political flag from the tower and jammed the door so we can’t get in to remove the flag.

“The Huntington Lighthouse is a 501c3. We do not allow political events, fundraisers regardless of party and would never permit any political flags to hang from our landmark which is enjoyed by everyone.

“Law enforcement has been notified and we will prosecute to the fullest extent of the law. As soon as the SCPD or Coast Guard allows access, and we can fix the damage to the door to allow access, we will remove the flag.”

Former US Rep. Steve Israel said, “Supporters of Pres Trump have broken into the Huntington Lighthouse, a non-profit and historic site, to hang a Trump flag. I appreciate the fast response by the Lighthouse’s nonpartisan leaders. Not appropriate for Trump flag, Biden flag, or any candidate.”

“Someone jammed wood in the lock and we can’t get it open,” Pam Setchell of the preservation society said. “We’re talking with the Coast Guard and Suffolk police. The lighthouse is a federal aid to navigation, and no one’s allowed up in that cupola.”

A pro-Trump parade of boats was scheduled to take place Saturday along the North Shore. 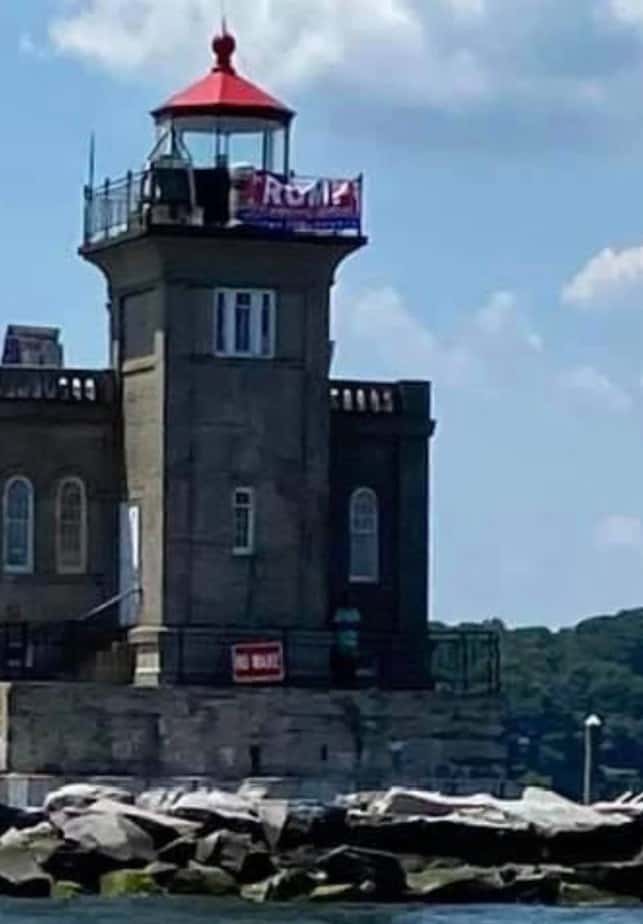