For those who aren’t aware, there is a proposed development application at Ale Court in Centerport to build a three-tier retaining wall which will be used for the construction of two houses on two lots.

The developers, Rosewood Developers, are seeking a variance for its construction after their initial application was rejected. There has been significant opposition to this project by the group Bald Eagles of Centerport (BEOCE), with nearly 22,000 members due to its potential impact on the nesting Bald Eagles at Spring Pond. This opposition, in part due to a petition signed by over 5,700 people and numerous individuals who contacted elected officials, led to a vote to postpone a decision on the aforementioned project.

The main issue here is that the construction site falls within a 660-foot zone of prohibited construction for nesting bald eagles, as designated in the Bald Eagle Conservation Plan. Now the Department of Environmental Conservation (DEC) has been contacted, as has the Fish and Wildlife Service (FWS) and their Northeast Eagle Coordinator to assess the situation, but this raises several questions as to the due diligence the town did for this project. A bit of background, these Bald Eagles have  had 13 chicks, and of the 13, 10 have fledged (meaning they flew) (3 just recently hatched so time will tell).

Furthermore, they are uniquely visible between their nest being located at Spring Pond and their preference for staying around the Mill Pond area. The Town has recognized this unique presence of the eagles by proclaiming every Sept. 25  “Bald Eagles of Centerport Day”. A note, Bald Eagles are protected under a few different plans and laws, including the Bald Eagle Conservation Plan (NYS), the Migratory Bird Treaty Act (Federal) and the Bald Eagle and Golden Eagle Management Act (Federal).

As part of the developer’s application, the presence of the bald eagles was not mentioned, apparently due to the fact that the eagle nest is not located on the property. Furthermore, the developers signed a declaration at the end of their application stating, “I certify that the information above is true and accurate to the best of my knowledge,” and after recent review, in my opinion, is reasonable. The potential impact to the eagles was not mentioned in the initial rejection letter from the Town, which was based, from my understanding, on the proposed retaining wall, from the Engineering Services Department for the project (linked here, PH #22799 and #22800, view relevant documents). Now the presence of the Eagles has been the driving factor for delaying the vote, and also at the vote that was delayed on March 24. Thus, it raises the question, if BEOCE members, led by Rob Schwartz, the founder of the group, did not speak up, would the impact to the eagles have been addressed, and would the project have directly proceeded?

Furthermore, as an additional issue, it seems the proposed construction site may technically fall within a DEC listed checkzone, which addresses wetlands (see hyperlink, dark green is the actual wetland, the light green needs to be determined if the area in the light green is part of the wetland). Also, in the developer’s application, for sections regarding wetlands, the developer did not mark them as the project site as located in a wetland, which is apparently true, however, with the site being part of the checkzone, this seems to warrant further review to determine the wetland boundary.

Now, it was brought to my attention that, it seems the DEC, in its wetland analysis for construction projects, doesn’t really go by the checkzone and instead strictly by the wetland location. However, it is still the New York State law that proposed construction be checked to see if proposed construction occurs in a checkzone. The Town of Huntington also did not mention this potential wetland status in their rejection letter that necessitates the variance and that warrants further review. In my opinion, this potential wetland status should be investigated, as it is not clear if the wetland boundary includes Ale Court until it is officially delineated as such. This, and the literal presence of the eagles, raises the question – what exactly is the procedure the Town follows for managing our natural resources in these aspects?

These eagles are beloved by many, and are a symbol of how with time, change can come. We need more action and due diligence to ensure our natural resources can be here for future generations to treasure and enjoy. This Earth Day, let’s move forward to help create a greener, equitable future for all residents of the Town of Huntington, whether they swim, walk, or even, fly, in our community.

John Probert is a resident of the Town of Huntington. He has a background in environmental science and previously worked at places including the Department of the Interior (government contractor) and the World Wildlife Fund. He is also an amateur wildlife photographer and has had his photos of snowy owls published twice in Newsday. 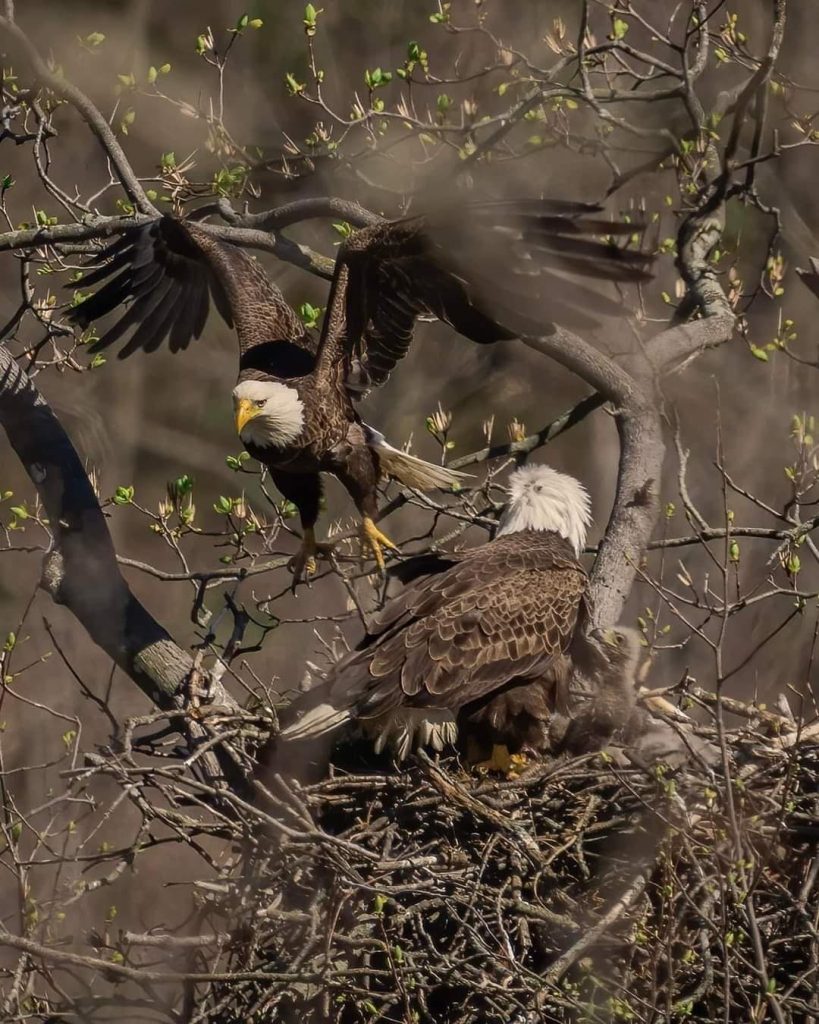