Nestled in the expanses of Heckscher Park in Huntington lies an institution that has withstood time. The Heckscher Museum of Art has thrived over the past 100 years and on Saturday, it will celebrate its centenary.

Anna and August Heckscher donated 185 pieces of art and the museum’s current building in 1920, creating the institution. 100 years later, the museum has more than 2,300 pieces of art within its permanent collection. The artwork spans almost 500 years, with the oldest piece having been created in 1534. It is currently on display.

Despite this wide time range, the museum focuses on “American modernism” and artworks from the 19th and 20th centuries.

In an interview with HuntingtonNow, the museum’s curator, Karli Wurzelbacher, Ph.D, discussed some of the museum’s history and the current exhibit commemorating 100 years. “From the moment I joined the museum, I started planning out this exhibit,” she said. “There was a positive challenge about how to convey 100 years worth of history.”

To do this, she decided to pick, choose and include the most important moments of the museum’s history. She said, “I decided to focus on foundational events and people that are part of the core identity and where we’re going in the future.”

One of these major events occurred in 2001, when the museum received its largest donation of artwork. Fred Baker and Ronald G. Pisano, two long-time companions and collectors, donated 289 pieces in that year alone. It was a posthumous donation from Pisano, who had died in December 2000.

The two donated so much to the museum because it was the first one Pisano had ever visited. In fact, he later became the curator of the museum itself and was recognized as a renowned scholar of American art. Even though he and Baker donated so much over the years, it was the large donation in 2001 that stood out. Their donations can be found in the Baker/Pisano collection.

The new exhibition also highlights the museum’s opening in 1920 as “one of the first suburban art museums” in the country, as well as the collection of one well-known artist: George Grosz. After fleeing Germany during World War II, Grosz came to Long Island and lived in Huntington from 1947-1959. During this time, he developed a strong bond with the museum and multiple pieces of his have been added to the collection.

Chief among these is Eclipse of the Sun, a political satire painting from 1926. The acquisition of this massive work was a catalyst for the museum. For one, it was crowd-funded by local residents and even students from Huntington High School. In fact, there is even a book with the names of all the people who contributed. Dr. Wurzelbacher said, “It’s a remarkable example of a community rallying around an artist.”

This acquisition also helped the museum grow in size. It led to the expansion of the museum’s collection and the acquisition of more works from a variety of eras and places. Additionally, the museum didn’t limit itself to a particular medium. Instead, there are sculptures, paintings and photographs among other media.

One of the other collections highlighted in the new exhibition is that of Arthur Dove and Helen Torr. They were husband and wife, two 20th-century artists whose work is classified as “American modernism”–one of the museum’s specialties. Dove himself is known as one of the first American abstract painters and he and Torr lived on a sailboat before settling down in Centerport. Not only does the museum have their work, but it also owns that house.

The current exhibit covers numerous other events and artists, making it the perfect exhibit to welcome back returning guests and new ones as well. Even though the museum was open during the past year, lessened restrictions mean that more guests will be visiting.

Despite the COVID-19 pandemic, the museum was able to remain mostly unscathed. The institution had just updated its website and launched Heckscher at Home, allowing people of all ages to access virtual events and exhibits. As for the in-person experiences, the museum was able to adjust its schedule. Dr. Wurzelbacher said, “We were able to be flexible and pivot very quickly.”

There are already some exhibitions planned for the future. The current centenary-celebration exhibit will remain until January 2022–with some pieces being rotated and replaced with new acquisitions in September 2021. After that, the museum plans on opening Moonstruck, an exhibition featuring a wide range of pieces that focus on the mystery of the moon and moonlight. Later, in late spring of 2022, it will open Global Asias, an exhibition that will highlight Asian and Asian-American artists.

In the past, present and future, the Heckscher Museum of Art has provided something for everyone. Dr. Wurzelbacher and her colleagues are “always thinking about outreach,” considering their location and status. To keep the museum open for another 100 years, they need to keep inviting people into their doors.

“It’s about strengthening the connection to the park and enticing visitors,” she said. “We have to increase the caliber and level of interest.”

By displaying 100 years of art, history, perseverance and community, the museum intends to inspire people of all ages and pique their interest in the rich art history of Long Island and beyond. Welcoming people and enriching them has always been the focus of this institution and will continue to be in the future. “That’s always been our mission,” Dr. Wurzelbacher said. “Creating a symbiotic relation where we can interpret art and share it.” 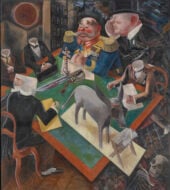 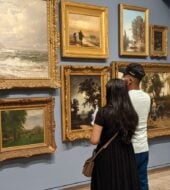 Visitors at the Museum. 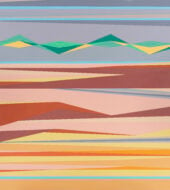