While there are hundreds of competitions that judge the taste, look and overall aesthetic of different types of beer, two Long Islanders decided to give a shout out to the people making these brands known – those who work in craft beer marketing.

The Craft Beer Marketing Awards (CBMA) is the first of it kind, a competition that recognizes the design and marketing efforts that brewers invest in their branding.

Developed by marketers Jim McCune and Jackie DiBella of Melville-based EGC Group, they said they know firsthand the importance of marketing within a small business.

“There are so many beer tasting competitions,” McCune said. “But there was not a lot of recognition for the people working behind the scenes and we decided to put this competition together.”

The CBMA recognizes and awards the very best marketing in the brewing industry across the nation, including some entries from Canada and Mexico. This year, they received hundreds of entries for over 30 different categories.

“There are so many other people on the marketing side of craft beer,” McCune added. “Brewers more than ever are recognizing that marketing of their beverages are so important.”

The duo decided in spring of last year to get the ball rolling. From October to February, small-time breweries submitted their logos and marketing strategies to the panel.

The judging panel includes 120 influential people in the beer industry who have worked tirelessly examining each brewery who wants to win the CBMA’s very own “Crushie” trophy – an award that was designed and manufactured by the same NYC designer awards firm that creates the Emmy and MTV’s “Moon Man” statue.

Sculptured to depict a heavily tattooed arm crushing a beer can, it represents how breweries are “crushing it” with their unique and creative beer marketing and branding, McCune said.

“They are being judged on how the marketing of their beer sways the consumer to drink their beer,” Dibella added.

With over a dozen sponsors, McCune said that they were critical in helping this award come into action. The finalists are now in the process of being judged, with a deadline of April 1.

Originally, winners were going to be announced at the 2020 Craft Brewer’s Conference in Texas, but due to current health crisis, it has been cancelled and winners will be announced live online on April 20. 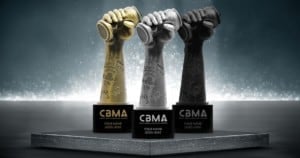