Where can  young people live? There’s the lure of living in a busy, vibrant downtown versus the comfort and familiarity of home, and often a paycheck gap between those options.

Keeping millennials on Long Island is a long-running issue. Towns are trying to figure out how to help young people start their lives and find places to live. Millennials, those born between 1981 and 1996, worry that they won’t be able to live as comfortably as their families did in the past.

According to a study published by the Long Island Association in August 2018, homeownership has changed from 1970, when 68.2 percent of 25-to-34-year-olds (single or with a spouse) owned their own home. In 2016, only 20.8 percent of young people owned a home on Long Island.

“The problem now is that millennials are at the housing age and the baby boomers are retiring,” said Christopher Capece, vice president of development at AvalonBay Communities, the company that built Avalon Huntington Station. “There’s a push of baby boomers and millennials both needing homes, so it’s the perfect storm . . . but we don’t have the supply, and the demand is growing.”

That’s why AvalonBay Communities began developing housing in Huntington Station. The area it selected met several criteria, Capece noted – it was close to the train station and near Huntington’s thriving downtown with its popular restaurant and music scene.

The development as first proposed, for 490 units, was originally opposed by local civic groups, but it has since become an option for young people —if they can afford it. Rent in the 300-plus unit complex starts at around $2,400 for a one-bedroom apartment, $2,800 for two bedrooms and over $3,000 for three bedrooms, plus utilities.

Avalon’s extras — pools, a gym on site, and an easy commute to Manhattan — appeal to millennials, Capece said. “We’re creating the living experience that millennials are looking for,” he said. “The millennial generation has different needs compared to previous generations and we provide that with our housing.”

The development of the apartments was controversial and a big step for the town. Local leadership was a huge help along the way, despite the continuous opposition, Capece said.

“Historically, Long Island was the land of single-family homes,” Capece said. “Villages and the community had never approved of bigger development and less than 1 percent of the zoning is dedicated to multifamily homes.”

“This puts Long Island at a disadvantage for retaining young adults who can’t yet afford to buy a home and workers in occupations ranging from nurses to computer support specialists whose incomes are too low to qualify for a mortgage or afford average rents,” the study notes.

Based on information in the 2010 Census report, the town’s housing breakdown shows 83.9 percent owner-occupied and 16.1 percent are renters.

When unable to afford apartment rent, many  young people choose to stay with their families.

According to data collected in 2017 by the Rauch Foundation’s Long Island Index Survey, more 18-to-34-year-olds are living at home or renting now than were doing so in 2004. In 2004, 18-to-34-year-olds were pretty evenly divided between living with family, renting, and owning a home.

Living on their own in Huntington at this stage seems nearly impossible to many younger people.

“I considered living on Long Island with my parents until I found something else,” said Laura Ironman, a 23-year-old who now lives and works as a speech language pathologist in Washington, D.C.

She looked briefly at the apartments in and around Huntington, but said, “It was unrealistic to find something in an affordable price range that wasn’t some hole in the wall.”

While some would argue that Huntington’s proximity to New York City offers a major draw to young people, Jaime Moskowitz, a 23-year-old Huntington native who now lives and works in New York City as the recruiting coordinator at Candid, a home orthodontics health tech company, spoke about the prohibitive costs of commuting. “I end up paying less in Brooklyn on rent than I would if I paid rent and an LIRR monthly from Huntington,” she said.

Both Ironman and Moskowitz mentioned the possibility of returning to the area if/when settling with a family of their own, but did not see that as feasible without a steadier, more significant income.

Renting not only option

Renting isn’t the only option, according to Kelly Taylor, a licensed associate real estate broker with Douglas Elliman on East Main Street in Huntington. She believes ownership is within millennials’ reach. Although popular, Taylor said, renting, especially near downtown Huntington, can be expensive.

This trend is seen islandwide, Taylor said, especially in areas that are near villages and revitalization efforts. The downtowns in Huntington, Port Jefferson, Sayville, Babylon, Rockville Centre, and Garden City get high marks from Long Islanders, according to Build a Better Burb, a Long Island Index offshoot that offers ideas and tips about the importance of design and planning within suburban communities.

“That’s where young adults are drawn,” Taylor said. “Interestingly enough, they don’t want fixer uppers. They want to buy a nice home with all their savings and get it done.”

Taylor said she has seen first-time buyers come in at higher price points, at around a $600,000 price bracket, because they saved everything to buy their first home.

On the flip side, some millennials cannot afford rent or a down payment because of their financial situations. Many can’t pass a credit check, either.

“We find that with millennials, many are graduating with a tremendous amount of student loan debt. At times, unfortunately, their debt-to-income ratios are high and that prevents them from having enough credit to purchase their first home,” said Pilar Moya-Mancera, the executive director of Housing Help, the only HUD-certified housing counseling agency in the town of Huntington.

There are meant to be affordable options available to all, but they are often not as “affordable” as they seem.

“The definition [of affordable housing] tends to be a little bit negotiated on a development-by-development basis,” said Roger Weaving Jr., president of the Huntington Township Housing Coalition. “The affordable component could be 30 percent of the area median income, 50 percent, 80 percent, or even 120 percent.” In general, Weaving explained, people should not be spending more than about 30 percent of their gross income on housing. The current Housing and Urban Development number is 33 percent, he said.

It turned out that C6s were not explicitly required by the 20 percent rule to have affordable components; the law only applied to housing that was going from places zoned for single-family homes to more dense zoning. “We worked with Tracey Edwards, Susan Berland, and the town to get a bill passed,” Weaving said about addressing this loophole. “Now anything five units or more has to have an affordable component.” If there are less than five units, payment has to be made into the town’s Affordable Housing Trust Fund.

Weaving said that this year, the HTHC is focusing on accessory apartments, making the process easier to navigate.

Accessory apartments allow existing housing to accommodate additional people, but there are a couple of obstacles that those applying face—including completing a process at Town Hall, and an initial home inspection that looks at the whole house. “If you’ve done anything to that house that doesn’t have a certificate of occupancy—if you finished a basement, if you put a deck on the back, if you added a pool, and you didn’t do any of that ahead of time—they look at that,” Weaving said.

The ramifications of catching up on certificates of occupancy and permits can be pricey, so Weaving and his team want to collaborate with members of the Affordable Housing Trust Fund Advisory Board to create low-interest loans to help people get through that step.

Weaving said making this process more accessible is especially important because 70 percent of current accessory apartments are off the books. With such a large number of apartments unaccounted for in housing statistics, it can be difficult to address how to move forward. “You still have the traffic and you still have water [use], but now you have no official way to respond to it because you don’t actually know that they’re there in a lot of cases,” he said. “The more we can get on the books, the easier it is to define and explain the problem to people.”

And that is what so many are looking to do when it comes to housing—explain the problems and find solutions.

Moya-Mancera believes there could be something to embracing multigenerational housing as a housing construct. In addition to receiving federal funding to build senior housing, there is talk of advocating for seniors and young professionals to live in shared developments. “They can share the community centers, they can have common areas, and according to the studies, that actually makes people happier, especially the seniors—the social part,” said Moya-Mancera.

“And for the young people, it makes it so much more affordable.” The challenge comes with convincing the federal government that young people should receive grants and subsidies. “That’s going to be a lot of advocacy on our part,”  Moya-Mancera said.

Weaving believes millennials have more power than they might realize, at least within the town. He said it is important for millennials to tell others what their needs and questions are with regard to housing.

Weaving said the lack of  two- and three-bedroom apartments is an issue. As he researched it, Weaving discovered that a lot of conversation about  apartment type is shaped by a focus on schools. “When you start to say, ‘Two- and three-bedroom apartments,’ everybody assumes you’re going to have kids,” Weaving said. “Some school districts have shrunk, Huntington is bursting at the seams. Whatever the situation is, they generally are not looking for more children.”

But according to Moya-Mancera’s Housing Help data, two- and three-bedroom apartments do not end up housing children. In the last fiscal year, Housing Help had 525 clients use the group’s rental search program. Of those 525 clients, 206 were below poverty level, and 188 had incomes 30 percent below the HUD median. “These people that were searching, they were mostly families with two or three adults. These are the families, the adults, who will be looking for two bedrooms, or perhaps three bedrooms. No children,” she said. “Realistically, with an income below $12,000, how can you support children?”

Weaving also spoke about the importance of getting involved in town politics. “At the core of it, there are five people you have to influence, and they’re pretty accessible,” Weaving said about the Huntington Town Board members. “They have meetings twice a month, they take emails, and they listen.”

Weaving emphasized that contacting the board members can be as simple as sending a letter or email, and it can make all the difference. “If we get 20 letters, 20 emails in, the opposition might get five. When people write in on an issue, and say, ‘This is something you need to address,’ that will focus their minds and get them to do something.”

In an effort to continue making information accessible, the HTHC, along with the League of Women Voters, is sponsoring a housing summit titled, “Keeping Our Young People in Huntington…The Need for Affordable Rental Housing and Downtown Revitalization.” The summit will be held from 8 a.m. to noon on Saturday, Nov. 17, at the Huntington Cinema Arts Centre, and will feature  town officials, businesses and local civic associations.

“We [the HTHC] don’t build. We don’t zone. All we can do is just push and nudge what’s already there,” Weaving said. “What we try to do is inform people about what’s possible, and where they should be headed.”

To learn more about the housing summit and the work the HTHC does, check the coalition’s Facebook page or website.

More information about Housing Help, the Long Island Association, and the Rauch Foundation can be found on their respective websites. 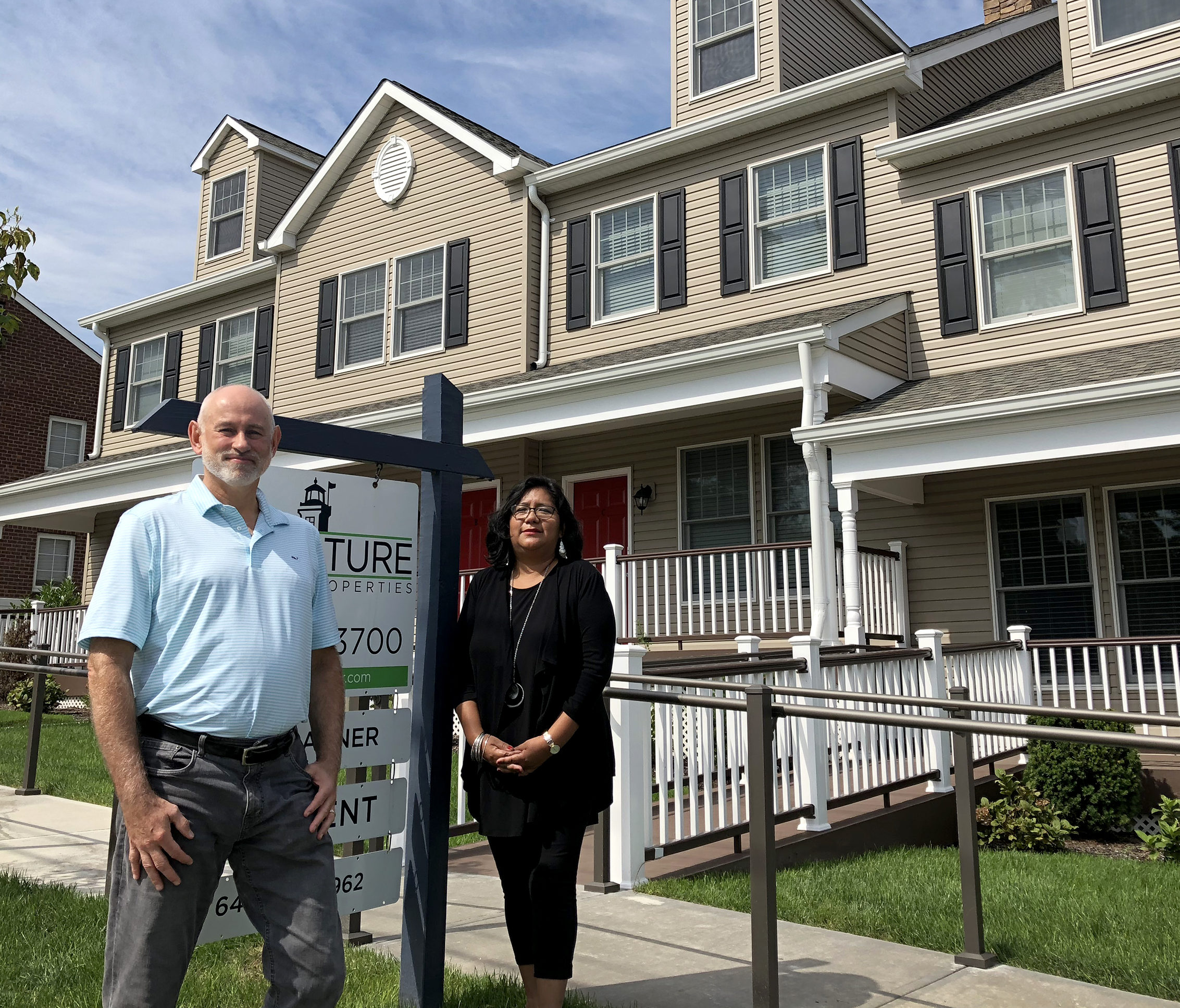 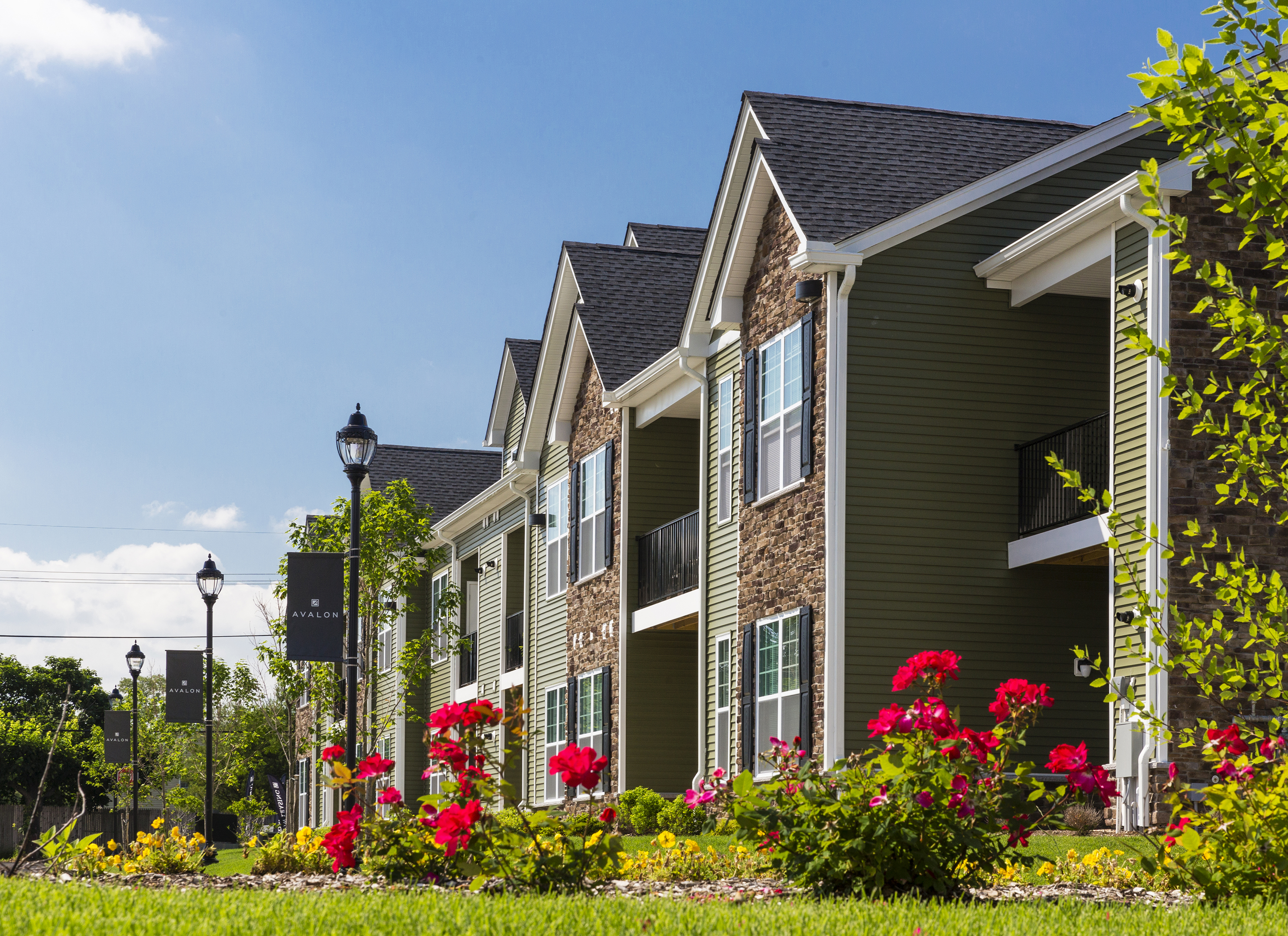 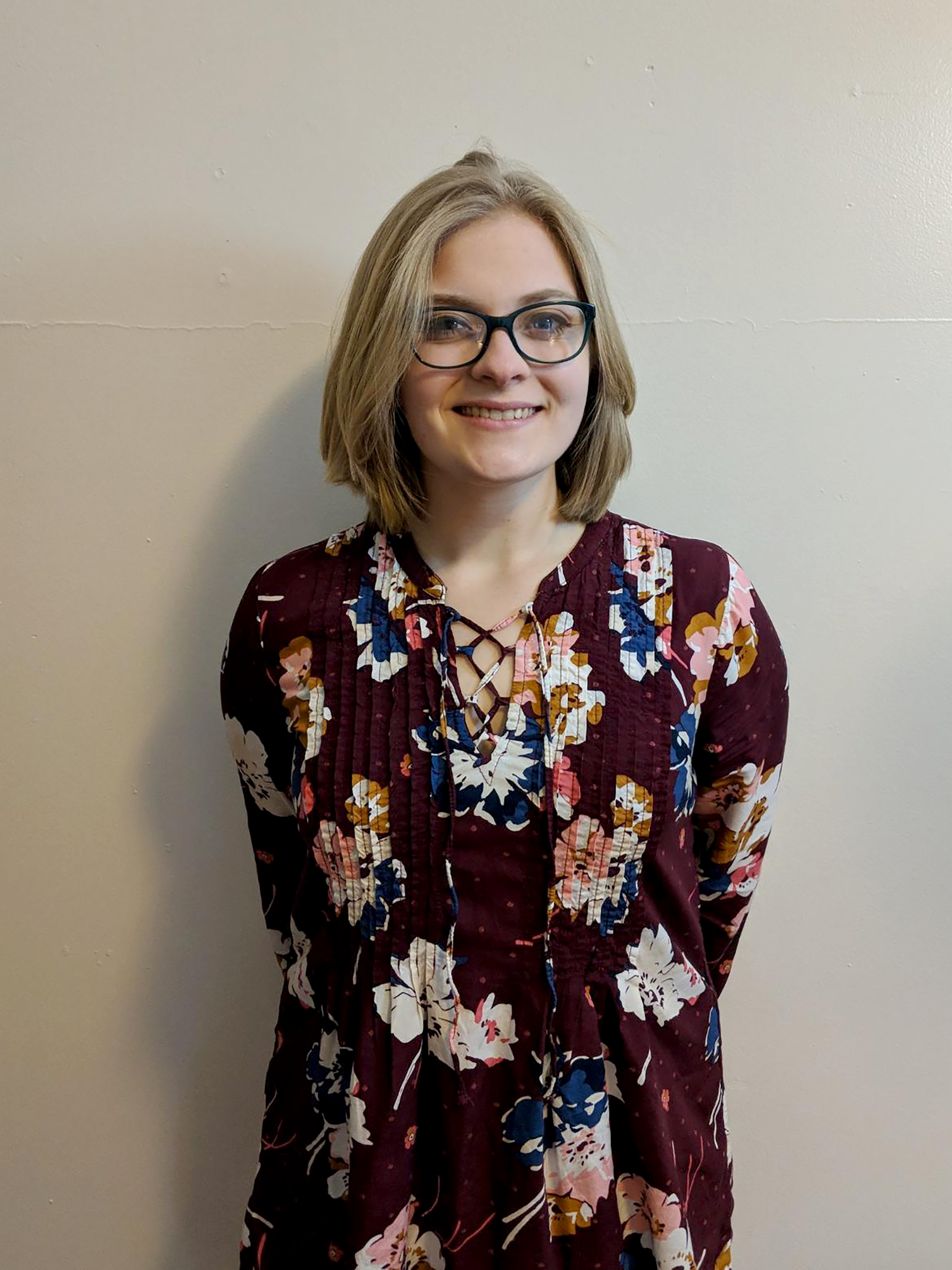 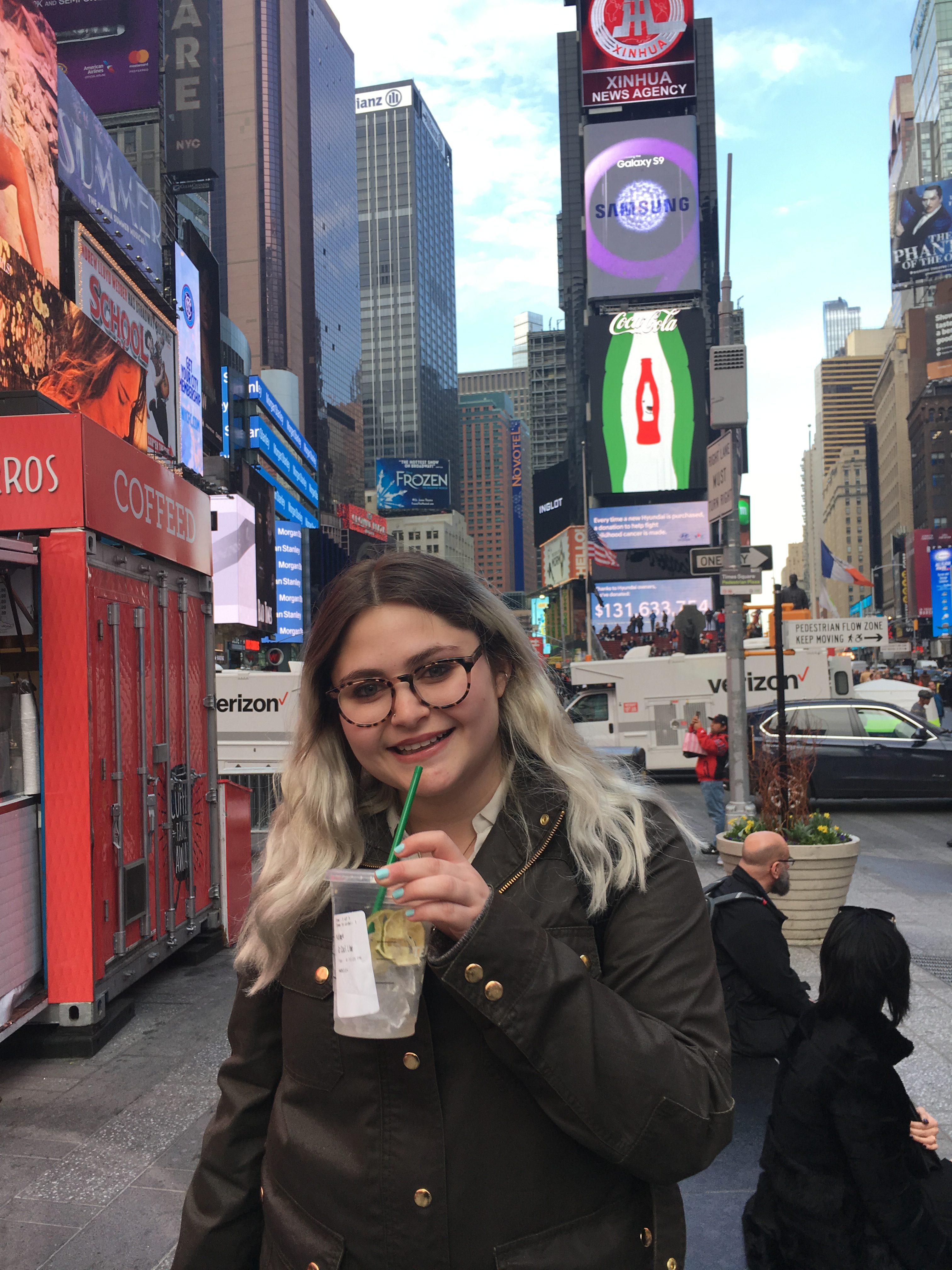 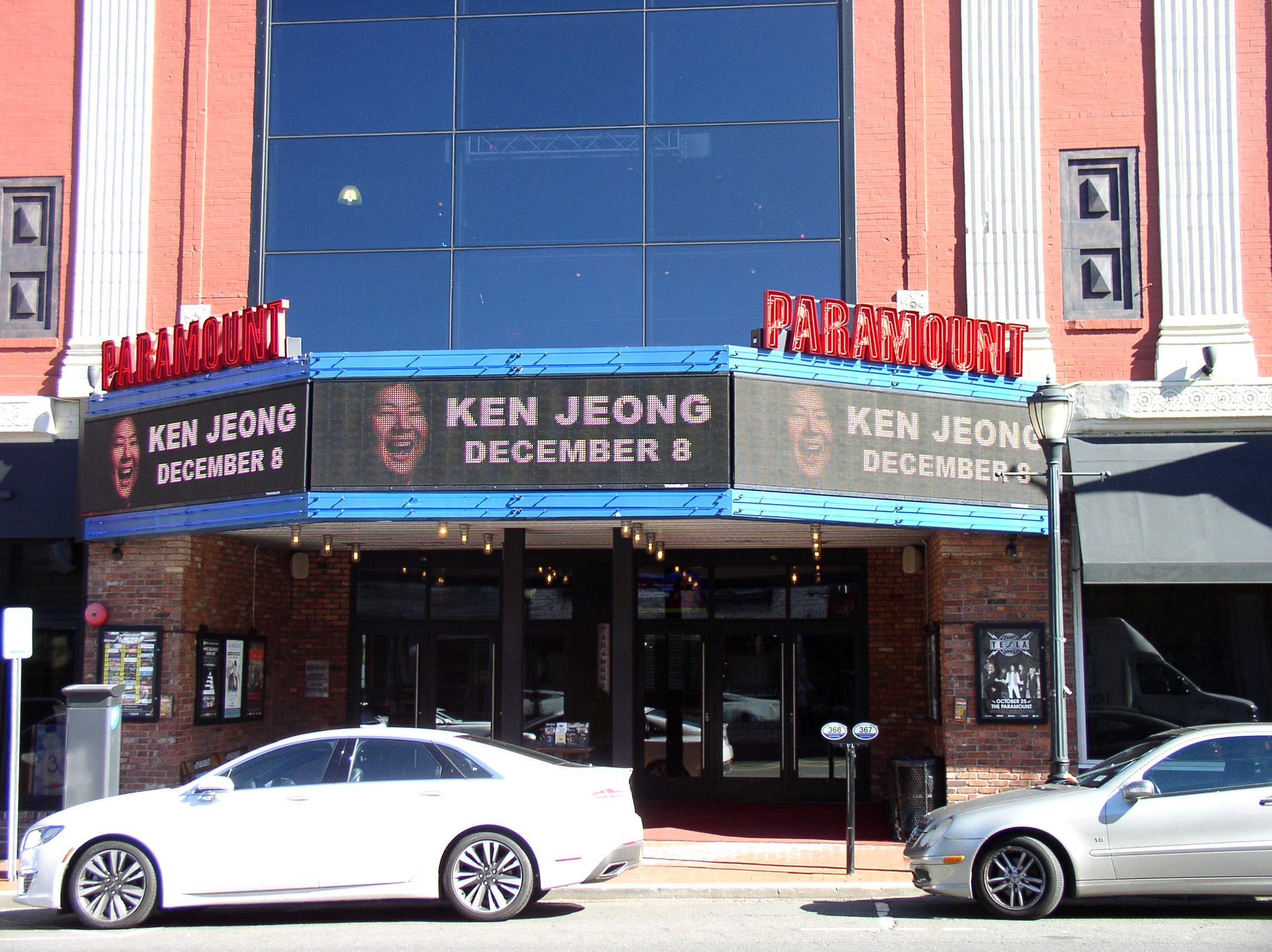 The Paramount is one of the lures of life downtown 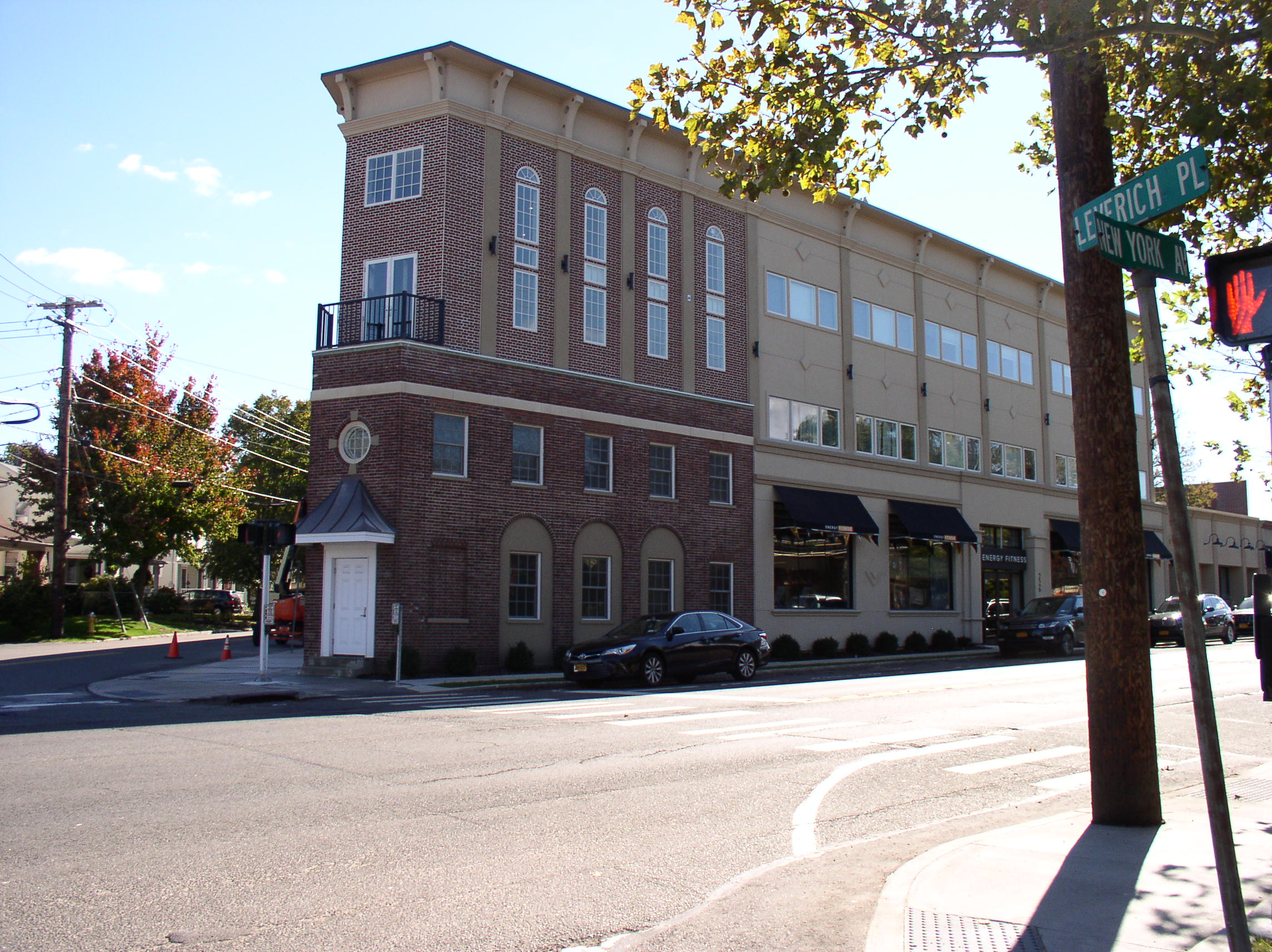 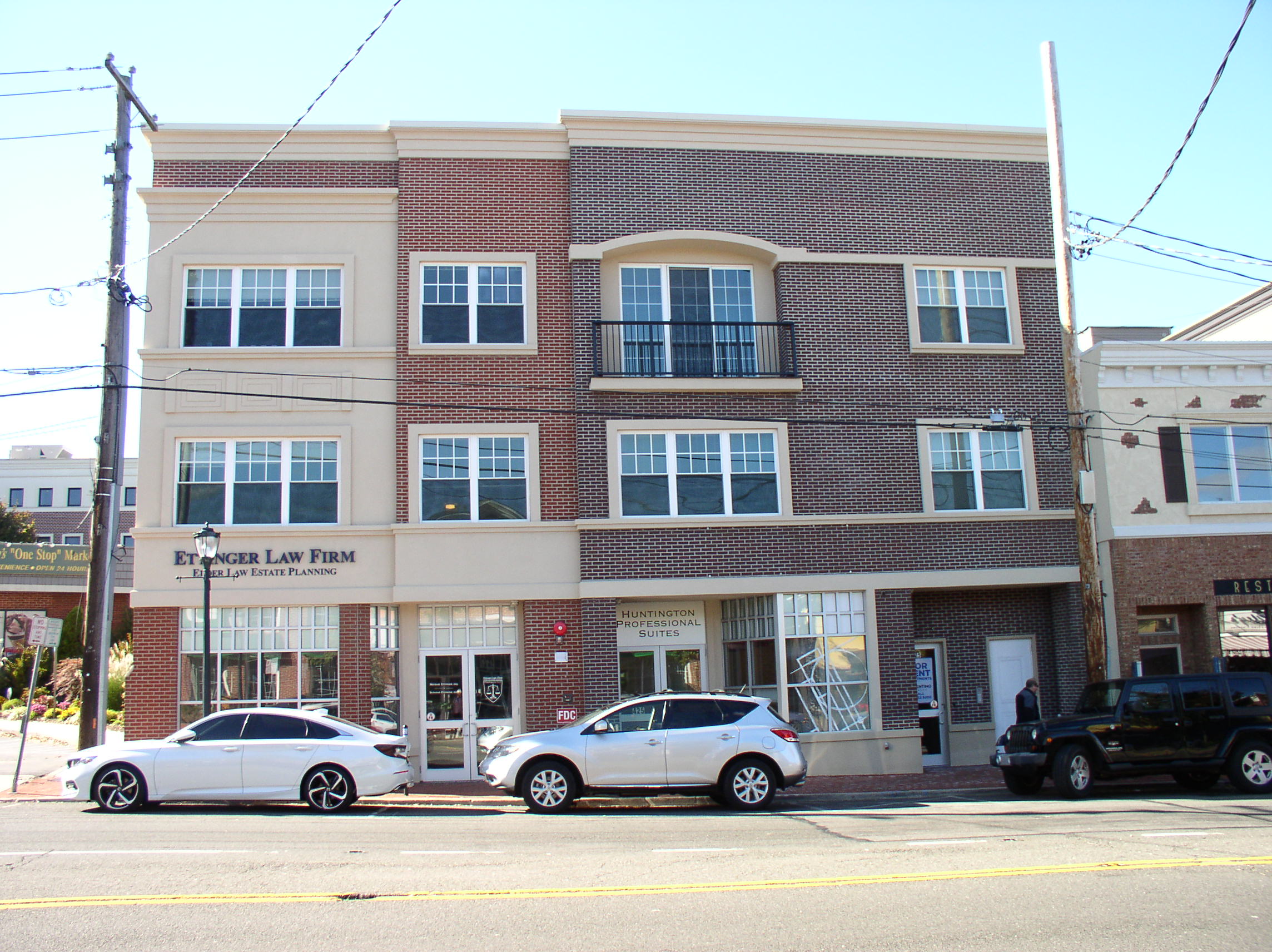 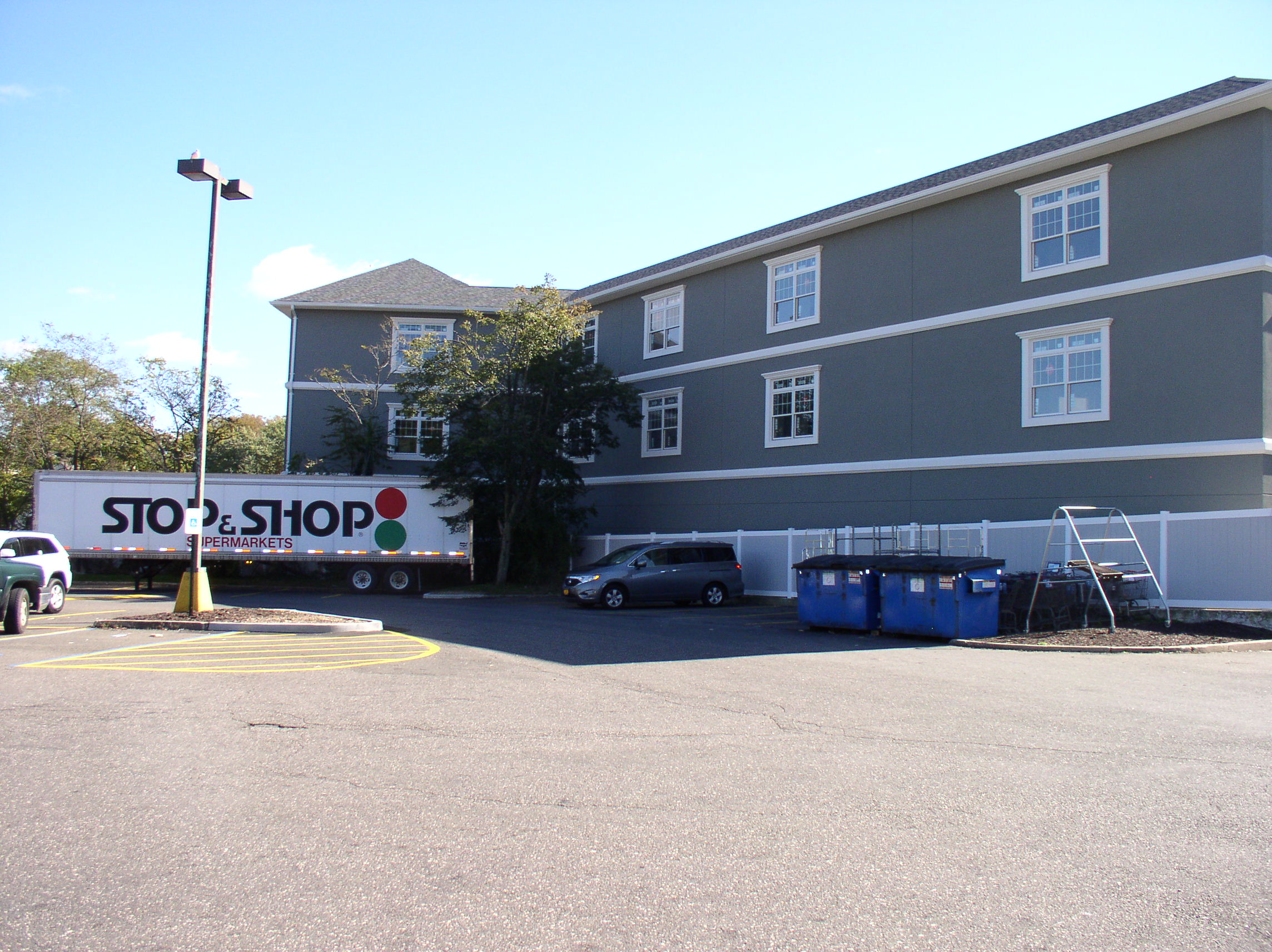 20 apartment units near the Stop & Shop