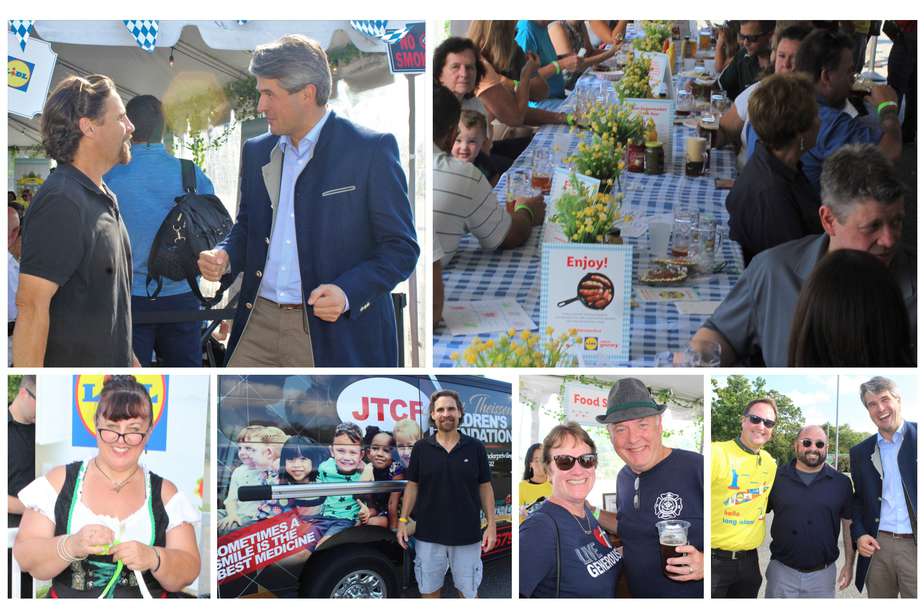 Part of the Walt Whitman Shops parking lot turned into an Oktoberfest celebration Saturday, to support a charity for children and introduce a grocery store chain new to the area.

Beer, bratwurst and a band were part of the festivities, sponsored by Lidl US, which bought the Best Market stores last year. All proceeds from the Oktoberfest will go to support the John Theissen Children’s Foundation.

The Oktoberfest continues Sunday, from 1-6 p.m.

John Theissen said that Lidl had reached out to him to support the charity, which delivers toys to sick children and provides financial assistance to their families. “It’s been a great partnership,” Theissen said.

Lidl is a major grocery store company operating throughout nearly every country in Europe.  In the U.S., Lidl has stores along the East Coast, from Georgia to New York. It has plans to expand further in the New York area, beyond the 24 Long Island Best Market stores. Four of the Best Market stores, including the one in Huntington Station, are undergoing renovations to convert to a Lidl design.

Roman Heini, chairman of Lidl US, said the company sees an opportunity to expand in the  busy American market. “We have fresh products at great prices,” he said. And he expects other chains to follow Lidl. In addition to lowering their prices to compete, Heini said, “They are renovating” and trying to match Lidl’s practices. The company also plans to continue to foster more community events.