Gov. Andrew M. Cuomo said Monday that the state would shift unused Covid-19 vaccine that had been originally designated for hospitals and nursing home staff to other categories of residents eligible for the vaccine.

He said the state Department of Health  would review hospitals with lower vaccination rates and move to supply to provide to those with pre-existing conditions.

“We have prioritized health care workers, doctors, nurses, our frontline heroes. We focused on hospitals administering to those nurses and doctors. They’re exposed most. They would be super spreaders if they get it and if they get sick the hospital capacity comes down. We went from 63 percent on January 18. We need a big push. We’ve got to 72 percent. Today we’re at about 75 percent, so we’re really hitting the refusal rate or the maximum rate that these hospitals can get done.

“Since we are at that maximum peak number there are still hospitals that are slower than other hospitals which I’ll mention in a moment. I’ve told the local health departments four weeks to get after those low performers but we’re going to take the excess allocation from the hospital workers and use it for people with underlying conditions, comorbidities,” Cuomo said. “This week they have the vaccines to vaccinate their workers and finish. But this is it. It will have been over two months that they had the vaccine for their hospital workers and they were charged with the responsibility of making sure every hospital staff person who would take it has taken it. If they don’t want to take it at one point we understand and we’ll give it to somebody else. So this is the last week for that.

“There is still a gross disparity in the high-performing hospitals and the low performing hospitals. And again, I asked the local health departments to look into this, but how do you have some hospitals at 100 percent and some hospitals at 40 percent, 50 percent? Something is just not right somewhere. I’ve been on the calls with the hospitals myself. I understand that there’s a declination rate. I understand that there are racial differences in declination rates. I get that but it still doesn’t add up in my book because you still have some hospitals in the same region with the same demographics of the same workforce and you have a gross disparity.” 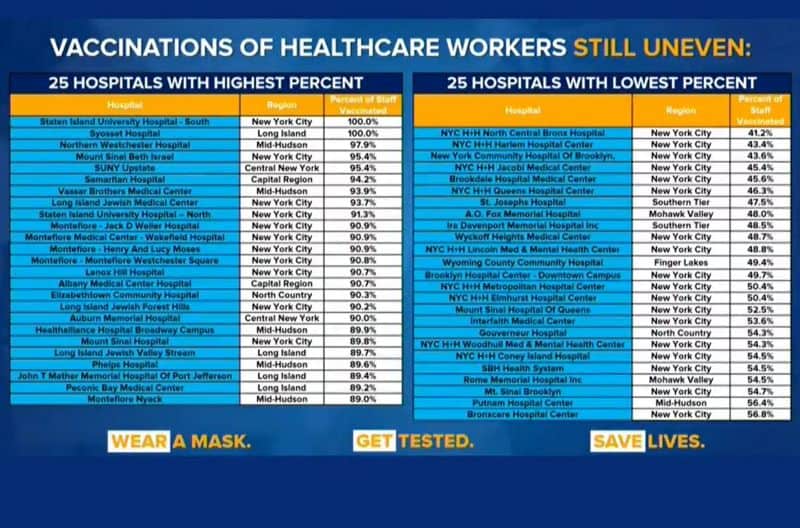