Updated 5:26 p.m. Huntington Coach Corp. canceled many of its bus routes for the Huntington school district, effective Thursday, Superintendent James W. Polansky said Wednesday, and will halt all service to the district after Friday.

He said the district was notified Tuesday afternoon that the company would not provide service to as many as 42 morning and 34 afternoon district runs to both public and private schools.

“Furthermore, the letter suggested that the company would abandon its five existing contracts with Huntington altogether, effective close of business on Friday, October 8,” Polansky wrote to the school community.

Wednesday afternoon, Huntington Coach provided Kristin Thorne at WABC-TV with a statement that attributed its decision to a shortage of drivers, exacerbated by a possible walkout by drivers opposed to Covid-19 testing and vaccination mandates. (See statement below).

But it did not explain why it singled out Huntington for the sudden cutoff of service. Other districts reported receiving calls oremails from Huntington Coach assuring them that their service would not be eliminated.

Bus companies around the country have reported a severe shortage of drivers as schools reopened this year after the Covid-19 shutdown and have been warning of problems with providing service for all routes, especially after-school activities.

Some sports schedules have had to be altered because there weren’t enough drivers available to complete trips to drop off students at their homes and then return to schools to transport athletes to games.

But the short notice has left the district scrambling to find alternative service.

“The above-described decision leaves us with extremely limited time to react in terms of securing an alternate contract or alternate means of transporting our students,” Polansky wrote. “At this point, we are putting forth best efforts to address the routes that will potentially be impacted this week. Affected families will be contacted via school district channels as soon as possible today.”

“Please know that we remain committed to ensuring that our students are transported to and from school daily, and to their extracurricular activities, in a safe and timely manner. We are currently pursuing alternatives and all remedies available to us.

“We will provide updates on the matter as promptly and as often as warranted,” he wrote.

State Sen. Jim Gaughran said he is in touch with the office of Gov. Kathy Hochul to seek emergency assistance and has asked Attorney General Letitia James to investigate “any actions she can take to hold Huntington Coach accountable for their reprehensible conduct.”

“It is unconscionable that with one day’s notice Huntington Coach is leaving thousands of Huntington students stranded tomorrow with plans to abandon the entire district next week,” Gaughran said.

Some school districts use their own employees or split service between private companies and staff. Others have contracted with other companies.

Parents whose children attend school outside the district began organizing on Facebook to carpool.

“In light of our distance to the school and the difficulty of getting our kids to and from our district and Uniondale I think it makes sense for the parents to have a forum to find other families that might be able to carpool. This is a very fluid situation but given the fact that it’s mere hours from the cancellation we do not have much time,” wrote a parent on a new Facebook group called Kellenberg Parents From Huntington. 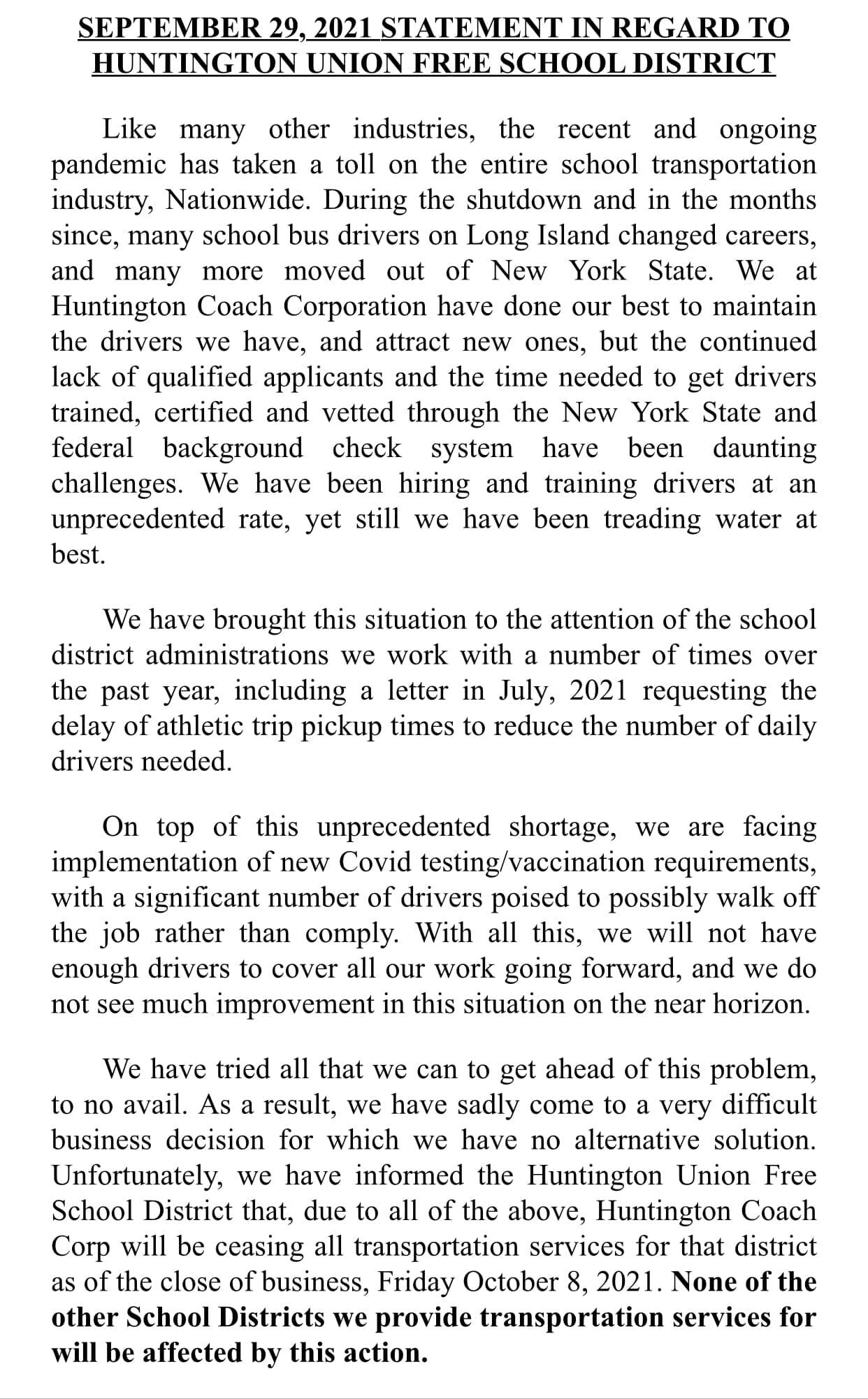