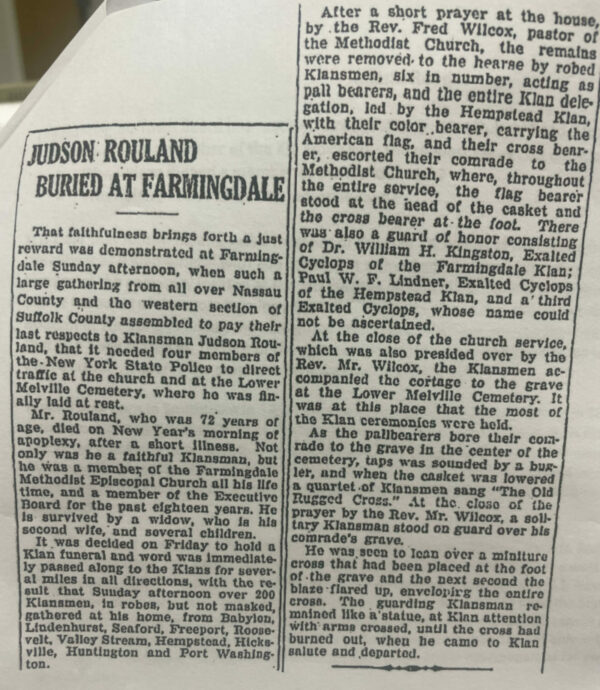 Huntington and Suffolk County officials are looking into next steps after the discovery of an old newspaper article that noted the Ku Klux Klan membership of the apparent namesake of Ruland Road in Melville.

The Jan. 9, 1925 article in The Long-Islander, an obituary for Judson Rouland, refers several times to his membership in the organization and the Klan funeral that was conducted before his burial at Lower Melville Cemetery. “As the pallbearers bore their comrade to the grave in the center of the cemetery, taps was sounded by a bugler and when the casket was lowered a quartet of klansmen sang ‘The Old Rugged Cross’,” the obituary reads.

Town Councilman Sal Ferro reached out to Suffolk Legislator Tom Donnelly when he learned about the article, Donnelly’s office said, and the two met to discuss next steps to take. Those steps include the need to research the history of the naming of the road and asking the community for its input.

“Our community celebrates its diversity and, working in partnership with the Town of Huntington and my colleagues in Suffolk County Government, we are taking immediate action to address the situation,” Donnelly said.

The article was discovered by a librarian at Farmingdale State University, which was the recipient of a donation of land from the Rouland farm, a source said.