Huntington officials warned boaters Thursday to reduce speeds and offered a variety of other tips to keep people safe over the long Fourth of July weekend.

Supervisor Ed Smyth said patrols would be out on the waters to enforce speed limits, including the temporary 5 mph zone, watch for boaters without life jackets, and identify and stop careless boat operators.

“It’s going to be a very busy boating season,” Smyth said, “and we’re going to have strict enforcement.”

“We hope everyone has a fun and safe Independence Day but we will be enforcing our zero-tolerance policy against speeding and boating while intoxicated — the Huntington Harbormaster and our bay constables will be patrolling alongside the Suffolk County Police Marine Bureau and you will be arrested if you are lucky enough not to experience the tragic consequences of irresponsible boating,” Smyth said.

Harbormaster Fred Uvena said boaters should check the capacity of any vessel they’re on to avoid overloading with too many people or carry-on items, to avoid what happened in 2012 when a boat carrying 27 people overturned and sank in Oyster Bay, killing three children.

Smyth noted that life jackets are available for loan at town facilities if boaters realize they are about to launch without them.

Gina Lieneck, who lost her daughter, Brianna, in 2005 when another boat crashed into theirs, has since become a water safety advocate, reminded boaters to avoid speeding and operate their vessels safely. “I don’t want this to happen to any other family,” she said. “Don’t drive recklessly; there’s no reason. If it takes a little longer to get where you want, it takes a little longer. You have to be considerate of the lives around you. And don’t let it end in a tragedy.”

Town Clerk Andrew Raia said, “If there’s one thing Covid did, it put a lot of new boaters in the water and you have to be aware of them. New boaters don’t always get it. They make erratic decisions. So just, be kind. Give everybody plenty of space and everybody will come back safe this Fourth of July. 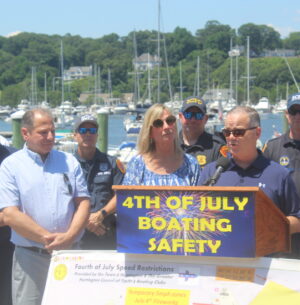 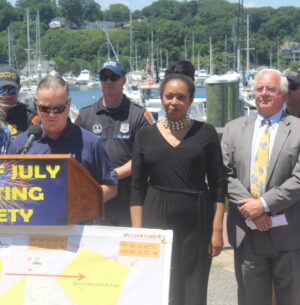