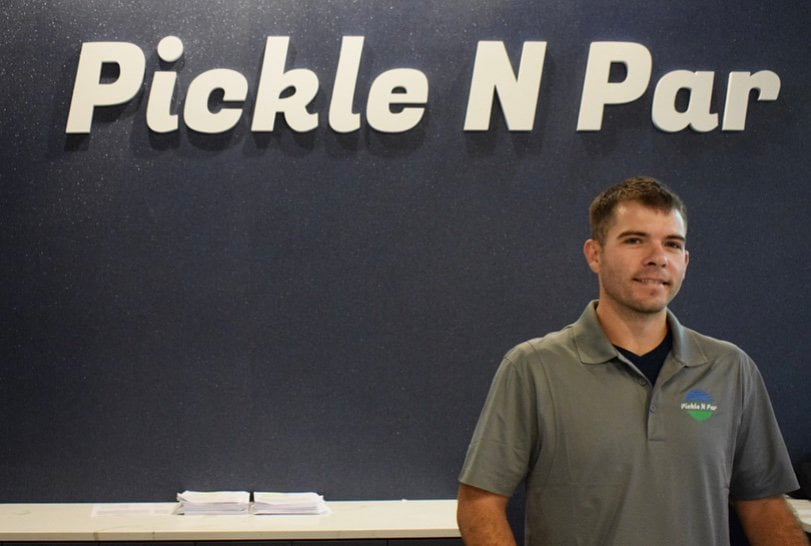 Pickle N Par has taken over the space of the former Restaurant Depot location at 515 Broadhollow Road, and plans on getting both counties excited about the sport.

Often compared to games like tennis, badminton and table tennis, pickleball combines similar rules and features. It has a shorter history, compared to other sports, and started in Washington State during the late ’60s.

Before the last decade, Andrew Ritter, manager of Pickle N Par, said that pickleball was known as a senior sport, and has a huge following in Florida.

“Over the last ten years it started to grow like wildfire,” he said. “There’s a lot more depth in the game… there are younger people in the game now and there’s a multigenerational aspect to it.”

Ritter had become an avid pickleballer after he discovered the sport, like most Long Islanders do, playing in his high school gym class in Glen Cove. He fell in love with the game and eventually became an IPTPA-certified pickleball instructor.

“For most people, including myself, it starts out as a hobby or a sport,” he said, “But it eventually turns into more of a lifestyle.”

While coaching part-time, he came across a social media post stating there were plans to build an indoor facility for pickleball players on the island. Ritter immediately contacted the investors saying he wanted to get involved.

“They made me an offer where I could quit my job and do what I love,” he said.

Since its grand opening on Sept. 30, Pickle N Par has already 100 dedicated members who play singles, doubles and compete with one another. Some are in their 70s and some are as young as 8.

“You can pick up a paddle and a ball and have competitive fun really at any age,” he said. “I’ve seen grandparents and their grandkids having fun… that’s one of the big selling points of this game.”

Along with its fun, but still competitive gaming, pickleball differs from other sports because it requires less intensive training and is easier on the body.

“You don’t need a lot of formal training before you begin to play and have fun,” Ritter said. “With other sports, there are a lot of instruction involved. We offer instruction here for pickleball, but really just to advance your skill to the next higher level.”

Ritter and his team have a lot planned for the facility – that also offers a high-tech golf simulation course, which helps players perfect those games, as well. Pickle N Par will be hosting different events, tournaments and leagues for people of all ages and levels.

“This facility gives us a unique opportunity to help grow the sport,” he said. “This opportunity gives us the chance to maintain our game in the off season, whereas in Florida they can play outside year round.”

He said that prior to this facility, pickleballers would have to improvise and use tennis courts, gymnasiums and rented out spaces to play. It just isn’t the same. “They’re not ideal,” he said. “They were doable, but you’re not getting the game you’re looking for.”

Tony Biancaniello, owner of the building, said that he was an avid tennis player and saw how popular pickleball was becoming while staying at his home in Florida.

“Every so often you look at something and you see the trend, I saw it down in Florida,” he said. “If it becomes half as big as it was down there, then it’s going to surpass tennis.”

Biancaniello said that it took well over a year to zone the building for sports and plan. The facility cost more than $1 million to bring to life and has about a dozen investors who share the common belief in growing pickleball. “Our idea is to use this as our model and hopefully build more locations,” Ritter added.

Located alongside a newly built Push Fitness and a Saf-T-Swim, passerbyer will look inside, interested and intrigued. “We really want to try and push people to want to become members,” Ritter said. “We want this to feel like a home for our pickleball players.”

With an annual membership available, and non-member pricing to rent a court, Ritter said that if someone wants to try the sport, they should definitely go for it.

“I never met anyone who has tried it and didn’t like it,” he said. “Don’t let the name scare you away, don’t let the stigma of it being a senior sport scare you away. It keeps you healthy, keeps exercise fun and it really gives you a place to build new friendships.”