South Huntington school officials plan more presentations this month on their ambitious plans to put the district in the forefront of education on Long Island.

Known as Vision 2020: the Future Starts Now, the plan covers nearly every aspect of public education in the district, including enhanced academics with more technology and science labs, 13 turf fields, strengthened security such as automatic classroom door locks and cameras on buses, improvements in art, music and theater programs, support for special-education families and infrastructure work on all buildings.

District officials have presented information to several groups throughout the community over the last few months. In addition, they plan two more presentations, Sept.12 and Sept. 25 at Walt Whitman High School.

The vastness of the project has provoked both support and opposition, along with curiosity. One person connected with another nearby school district wondered whether South Huntington was “getting too big for its britches.”

But South Huntington leaders say the time is now to push into the future, with the slogan, “Imagine a School District Ahead of Its Time…Far Ahead.” They describe their goals as transformational across the generations. 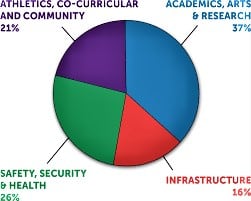